The meat of the matter

I’ve been a vegetarian for years. Would it be wrong to turn our office cafeteria into a no-meat zone?

This meaty question has lots to dig into, starting with what you mean by “wrong.” Legally, explains Laura Williams, a human resources lawyer, employers can serve whatever they want (or nothing) at the office commissary. “Certain things are required in employment relationships, and other things are perks. A cafeteria is a perk,” she says. You can provide whatever you see fit—from a vegan salad bar to a roast carving station—but remember a perk, by nature, is supposed to be positive. “You want it to be as inclusive as possible so that many employees partake,” says Williams. If burgers are a hit and you’re the only vegetarian around, going meatless might be a selfish move that leaves a bad taste in everyone’s mouths. But wait! We’re not done: If your “no-meat” zone involves banning animal products from the workplace, now you’re just wrong. “While you’re not legally required to provide anything, you can’t prohibit certain foods from being brought from home,” says Williams. Admittedly, discrimination against carnivores isn’t rampant, but anything that touches on a person’s religion or creed is a human rights case waiting to happen. Even someone on a doctor-ordered keto diet could claim discrimination. If you really want employees to leave their cold cuts at home, stock the cafeteria with delectable vegetarian cuisine that will entice even hard-core meat lovers.

Our employees frequently complain about a lack of communication, but we have newsletters, town halls, regular email updates, etc. What am I doing wrong?

The first problem, says Ellen R. Auster, a professor of strategic management at the Schulich School of Business, is characterizing this legitimate feedback (itself a great sign you’re blessed with employees who care) as “complaints.” Doing so is negative and dismissive. It’s also a bad sign that you’ve ignored this type of feedback so often that it’s frequent. Communication is essential, and you need to do better—starting now. “If online surveys aren’t working, I’d do some one-on-one coffee connects with key influencers. Acknowledge that you hear the rumblings, and ask them to help you understand,” says Auster. Newsletters, town halls and email are a good start, notes Auster, but “I don’t really hear any notion of two-way communication in this question.” What’s wrong is you’re not listening.

I have 5,000 unread emails. How do I get my inbox under control?

Do it the same way you would to get 50 emails under control, but on a larger scale (this is now going to take a few hours). Linda Chu, founder of Out of Chaos professional organizing solutions, recommends employing the 4-D management principle, but she’s added another D: delete, delegate, do, document—and defer. “Start simple, with junk mail. Newsletters and flyers can be gone in seconds,” says Chu. Hopefully that will motivate you to delegate. “Those are emails you don’t necessarily have to deal with. Forward them.” “Do” might seem daunting until you know this: “Half of your emails can be done in two minutes or less,” Chu says. So rather than adding a simple task to the pile, take the two minutes and get it done. Next, Chu recommends stowing the emails that don’t require you to do anything but need filing away. You can use whatever storage system works for you. Everything else lands in defer, a.k.a. your “to-do” pile, which hopefully is a mere fraction of your massive inbox. And then schedule a half-hour every day for some 5-D action so you don’t find yourself in this mess all over again. 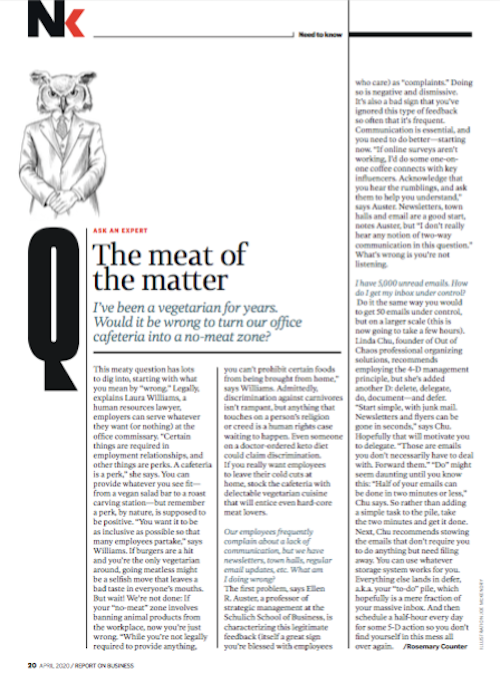