These toys are just for grown ups

If you’re looking for something a little—ahem—sexier than socks for your lover this holiday season, you’re in some serious sensual luck. Gone are the times where a cheap plastic toy from a seedy sex shop might land you in the doghouse ‘til New Year’s. These days, vibrators are sleek, high-tech investment pieces—and they’re not just for her either.

Sex toys aren’t new, of course, they’re just more mainstream. Anyone interested in the history of the vibrator—invented to ease doctor’s tired fingers when treating “hysteric” women to “pelvic massages”—should check out Maggie Gyllenhaal in Hysteria, a fave pick at this year’s film fests. But even as late as 1998, viewers gawked when Sex and the City’s Charlotte fell so hard for her Rabbit Pearl she stopped leaving her apartment. (When women were done being shocked, they promptly turned the toy into an international bestseller.)

That’s the next news buzz: Even sex toys are going green. There’s no regulation on this, explains Vogels, but since savvy consumers want bodysafe and eco-friendly products, companies are responding accordingly. The Leaf, an adorable green massager that looks exactly as it sounds, is stored in a bleach-free burlap sack and uses a “rechargeable lithium-polymer battery to help you reduce your carbon footprint.”

At Aren’t We Naughty, a store for couples with 11 locations across Ontario, manager Ashley D. sees a new concern with ergonomically and environmentally friendly toys: “People want to know what they’re putting in and on their body is safe,” she says.

But how can you sneak a toy into your better half ’s stocking this season? “You might not surprise your sweetie on
Christmas morning while the kids are opening their bikes,” laughs Vogels. Instead, wait for a more intimate moment or present it as part of a toys-for-grown-ups package.

If you’re a man, skip the scratchy lingerie in favour of a sleeker selection: “If you come home with something classy that’s focused on her pleasure, she’ll likely be much more interested,” says Vogels. And if you’re a woman, “really, anything that says you’re interested in sex and wanna kick it up a notch he’ll probably love.” 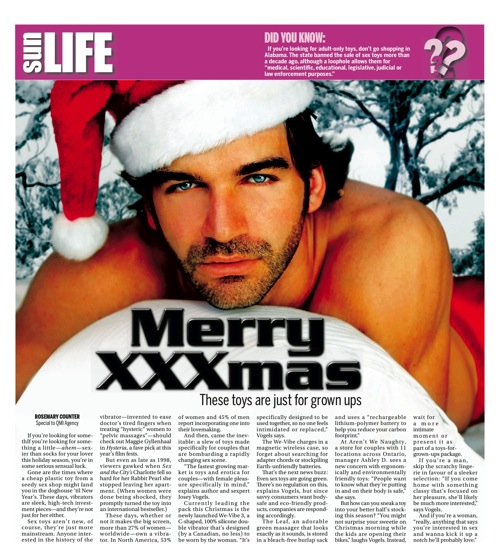