The gap year was once for sowing wild oats before university. Now, post-degree, it’s about getting a job.

University of Guelph undergrad Casey Panning, now 24, was sitting in a Southeast Asian geography class when it occurred to her that she might never see Asia. With vague plans to teach geography, and inspired by a friend who’d spent a semester in Singapore, Panning knew it was now or never.

The gap year—taking a year off school to work, travel or volunteer—has been a pre-university rite of passage in Europe, where it began in Britain in the ’60s and spread to other Commonwealth countries—including Canada. A Statistics Canada survey of about 8,500 high school graduates from 2000 to 2008 found that just 50 per cent had started college or university within the usual three months; 73 per cent had begun in a year’s time; and by 28 months after graduation, 81 per cent of students were attending a post-secondary school.

Some schools even encourage a break: York University’s Bridging the Gap program allows students to defer their acceptance; Harvard actually suggests it.

But while the gap year once fell definitively between high school and higher education, travelling the world at 17 or 18 just isn’t feasible for many people.

“First of all, my parents would have never let me,” says Panning, who finished a bacherlor’s in psychology before spending her gap year teaching English in Costa Rican slums and travelling with her boyfriend through Australia, Laos and Thailand. Besides parental objections and a lack of money (and fewer skills to land a job), more maturity makes a post-degree gap year easier and more rewarding than its post-high school equivalent. “It’s way better to get university done and then go,” Panning says.

Nobody tracks when or where college and university grads go after they receive diplomas or degrees, but Susan Griffith, a transplanted Canadian living in Cambridge, England, says the post-university or -college gap year is a trend that has emerged since she started publishing Taking a Gap Year in 1999. She says the later gap year is both practical—“you’ve already paid your tuition”—and situational. “It’s much more difficult to get a job right out of university these days.”

This is especially true for students who graduate from programs like English and philosophy; despite what they might have been told, a B.A. often isn’t enough. Instead of working at a menial job, travel—whether for work or volunteering or tourism—is a great way for students to beef up a resumé and set themselves apart from the competition.

“Gap years were once frowned upon by employers, as if kids would rather travel than focus on their careers,” says Katie Idle, director of Vancouver-based Study and Go Abroad, Canada’s largest travel fair. “But things are changing; the workplace is globalized. Now it’s a big asset if you’ve travelled, interacted with cultures and lived in a different country.”

Conversely, a bad gap year can hurt your chances for success. “An unsuccessful gap year is when you get some terrible local job and never get around to doing anything,” says Griffith.

To avoid this, a slew of personalized gap-year planning companies are flooding the Canadian marketplace. Toronto-based My Gap Year, for example, offers “a unique combination of life coaching and travel,” says co-founder Julie Newton. Her current clients, about half of them doing a post-university gap year, have found themselves living in the Amazon jungle, working on a ranch in the Australian outback and hanging out with Tibetan monks.

“We start the program with coaching,” says Newton. “We ask, ‘What do you want out of this year? What are your goals? What’s important to you?’ ”

If travel isn’t possible or of no interest, a stay-at-home gap year can be equally good for boosting a lacklustre portfolio. “We had one student who wanted to go to film school, so we got her into an online writing course, she volunteered at the Toronto International Film Festival and worked at a Cineplex movie theatre,” says Newton. The student was soon accepted into the program she wanted.

Most important, a gap year removes students from the conveyor belt of academia to get some much-needed perspective and appreciation for what they have. “People learn that they live very privileged lives and not to take simple things—water from a tap, even—for granted,” says Griffith. For most, another year of education may not seem so bad.

Which is exactly what Casey Panning did when she returned to Toronto. Thoroughly convinced she wanted to teach, she enrolled in teacher’s college and graduated last June. But teaching jobs are scarce. “I’m working at a law firm for the time being,” she says. And if nothing in her field pops up soon, would she tap out and go travelling again? “I would absolutely love to,” she says. 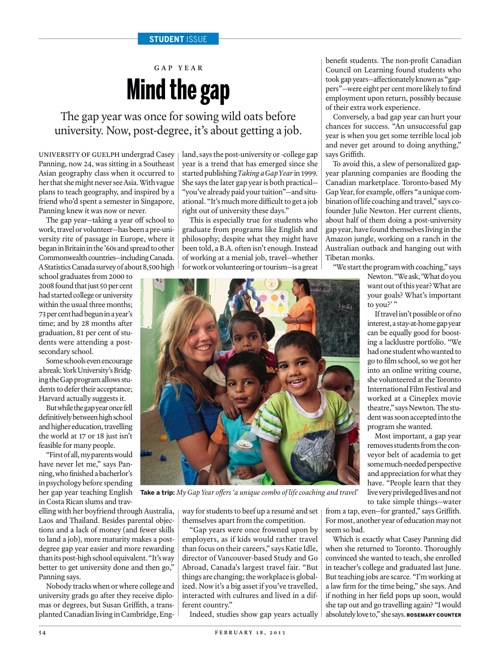