At 15, my parents told me, “If you want money, you should get a job.” I applied at Ontario Place, because it was seasonal and my parents wanted me to focus on classes during the school year, and because it was an outside job by the water. I remember being totally ecstatic when I got the job, feeling like an adult and that I was going to be rich. Minimum wage was well below 10 bucks, but to me at the time, it was a lot. I mean, I could buy my own clothes at the mall!

I started out as a park attendant in the children’s village – a big tent that’s all torn down now, it’s so sad – with a ball pit, merry-go-rounds, and a huge slide. My job was to watch over the kids, make sure the lines were moving and under control, that the kids were tall enough but not too tall. It was really hard for me to have to tell kids they were too tall, because I was a kid myself, pretty much, so I knew exactly what they were feeling. But I’m also a stickler for rules, for sure. Sometimes the kids would cry or their parents would be angry or aggressive, and I’d have to stand up to them. I’d explain the rules and the expectations and why we had them, which actually made me a more confident person every time I had to do it. Also, most of the people I worked with were a lot older than me, so that helped, too.

The next summer, I was promoted to ride operator. There was a mini drop tower, a ferris wheel, and bumper cars – a major bump in responsibility that required training. This was great because it wasn’t difficult, stop and start mostly, but it was a massive ride that I was in charge of all by myself. I got a pay raise, I got a nice tan, I fell in love with another park attendant. It was so fun that I came back again – twice. I was there for four summers altogether, until I went away to school at Queen’s.

I always knew I wanted to be a newscaster. My mom has a VHS somewhere of me at the Ex one year when the Blue Jays had set up a desk and teleprompter so kids could do play-by-plays. I was prob- ably like eight or nine and I loved it! My parents told me it was a real job and I could do it if I wanted to, which I did. It was important for me to get an undergrad first though and get lots of different experiences and perspectives. I took a year off and lived in Brazil. I knew I needed lots of varied experiences to be a good journalist.

As strange as it sounds, talking to kids all summer actually really helped prepare me for news. You really have to listen to kids, be patient and try to understand their perspective, decipher their logic and follow along. Which is just like an interview in journalism: you have to pay close attention to what a person is saying in order to learn about them and capture their truth, then you’ve got the responsibility to tell their story. It’s basically still what I do all day. 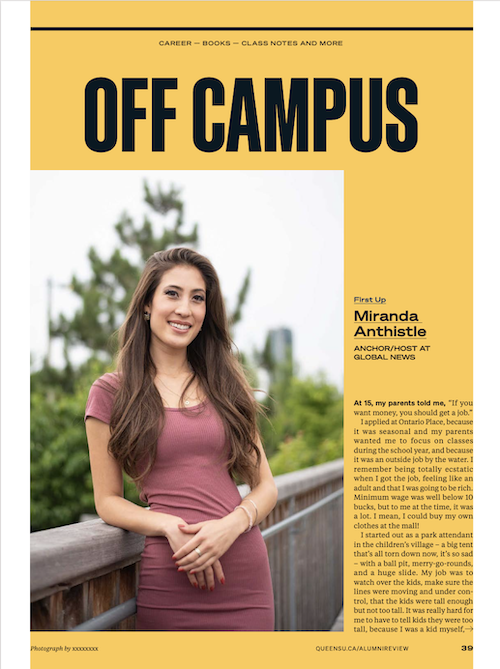