Conflicting studies abound about whether or not alcohol is good for you. But there is sense to be made of it all

Studies, studies and more studies look at very specific aspects of every health issue, and the conflicting headlines that often result can be frustrating. Nearly 80 percent of Canadians over the age of 15 drink regularly, so it’s crucial to know what to believe. We analyzed the studies, and found there are indeed two sides to every story. But not to worry: We were able to form some conclusions for you.

It increases your cancer risk
A study of more than one million women from the U.K. in 2009 found that even low to moderate alcohol consumption ups your cancer risk. (Health Canada’s Low-Risk Drinking Guidelines allow 10 drinks per week for a woman, and no more than two drinks per day.) The study, published in the Journal of the National Cancer Institute, found that alcohol may account for nearly 13 percent of breast, liver, rectum and digestive tract cancers combined. The reason? Scientists from the University of Minnesota found that the body’s breakdown of booze forms acetaldehyde, which damages DNA and triggers chromosomal abnormalities that may lead to the formation of cancer cells.

It decreases your cancer risk
Red wine contains the powerhouse chemical resveratrol—long known to reduce body inflammation, cholesterol, heart diseases and, yes, even certain forms of cancer. A 2012 study from Cedars-Sinai Medical Center in Los Angeles published in the Journal of Women’s Health found that this chemical, which is found in the skin and seeds of red grapes, slightly elevated testosterone among premenopausal women while it lowered levels of estrogen—reducing the women’s risk of developing breast cancer.

It harms your brain
The more alcohol you consume, the smaller your brain becomes. Decline in brain volume, a natural part of aging, is estimated at two percent per decade, according to Carol Ann Paul from the Boston University School of Public Health and the lead author of a 2008 study in the Archives of Neurology on the association of alcohol consumption with brain volume. Paul was investigating whether alcohol might protect against brain shrinkage, but found the opposite was true. Even moderate levels of alcohol consumption resulted in a decline in brain volume, which is associated with cognitive decline and dementia.

It helps your brain
Alcohol’s good effects on the brain are a relatively new development, but the research is mounting up. Contrary to the old adage that beer kills brain cells, new research has found that moderate alcohol consumption is associated with better cognitive skills, and even better learning and memory. Not only that, a sweeping 2001 review of more than 140 studies found that a drink a day for women (or two for men) reduced their risk of developing Alzheimer’s disease by 23 percent.

It stresses you out
While a 2011 study in Alcoholism: Clinical & Experimental Research found that two drinks before a stressful task decreases the release of cortisol—your body’s natural stress hormone—it also prolongs feelings of tension and slows your recovery. As for sleep, even one drink interferes with your restorative sleep, says another study from 2011 published in the same journal.

It relaxes you
Social bonding is enhanced by drinking alcohol. A brand new study published in the journal Psychological Science put 720 strangers in potentially awkward group settings. Those who were given liquid courage showed boosted emotions and enhanced social bonding—in other words, they enjoyed themselves more and made friends.

It harms your bones
Excessive alcohol consumption, especially in young women, is linked to the development of osteoporosis, according to the U.S. National Institute on Alcohol Abuse and Alcoholism. Moreover, heavy drinkers are more prone to bone loss and fractures, due to an increased risk of experiencing falls when tipsy.

It helps your bones
Because beer contains the nutrient silicon, it has long been linked to healthy bones. And newer studies, such as one from Oregon State University published in the journal Menopause in 2012, found that moderate amounts of alcohol may benefit women’s bone health and lower their risk of osteoporosis. Post-menopausal women who drank one or two drinks a day several times a week measured a much lower rate of bone turnover—the replacement process of old bone with new bone that increases the risk of osteoporosis.

It causes weight gain
A 1995 study in The Journal of Clinical Nutrition found drinking alcohol with a meal increases your tendency to overindulge in fatty foods. Plus, says Mavis Jones of ECHO: Improving Women’s Health in Ontario (a Government of Ontario agency), “Alcohol slows down your metabolism, so it’s more difficult to maintain a healthy weight.”

It helps you stay slim
A 2010 study from the Brigham and Women’s Hospital in Boston followed more than 19,000 women for 13 years. They found an inverse relation between weight gain and alcohol consumption, despite the extra calories some women consumed in alcohol. That is, women who drank none gained more weight than those who drank just a bit.

It’ll kill you
A 2010 study in the medical journal Lancet ranked alcohol above heroin and crack as the overall most harmful drug to humankind. This is no surprise to Norman Giesbrecht, senior scientist at Toronto’s Centre for Addiction and Mental Health: “Once you factor in the scope of alcohol, from disease to car crashes, you have a much larger burden to society than from illegal drugs.”

It’ll help you live longer
University of Texas researchers found that moderate drinkers live longer than abstainers. The study, published in 2010, looked at almost 2,000 people age 55 to 65. After two decades, 69 percent of the nondrinkers had died, compared to 60 percent of heavy drinkers and just 41 percent of moderate drinkers. The explanation? “It could be that people who drink moderately [one or two drinks a day] practise moderation with regard to many other areas,” says Giesbrecht. Also, a 2011 Harvard study found middle-aged women who drink moderately are more likely than non-drinkers to stay healthy as they age, and less likely to have heart disease, type 2 diabetes and dementia.

The Bottom Line
“You get the biggest benefit at a drink a day,” says Gerald Thomas, senior research and policy analyst at the Canadian Centre on Substance Abuse, “but there are better ways—like diet and exercise—to get those benefits.” So how do you find a balance that works for you? “Consider your genetics, lifestyle and body mass,” says Thomas. Someone with a family history of cancer, for example, should probably drink less; a middle-aged woman looking to lower her risk of heart disease might enjoy a nightly glass of Merlot. Know your risks and benefits of moderate drinking—combined with a healthy diet and regular exercise—so you can properly toast “to your health.” 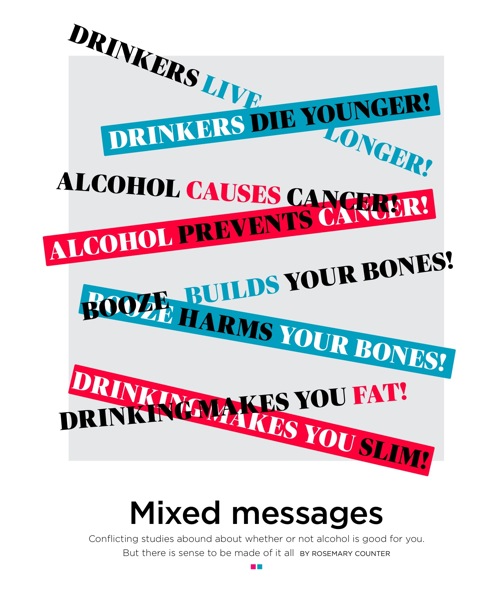 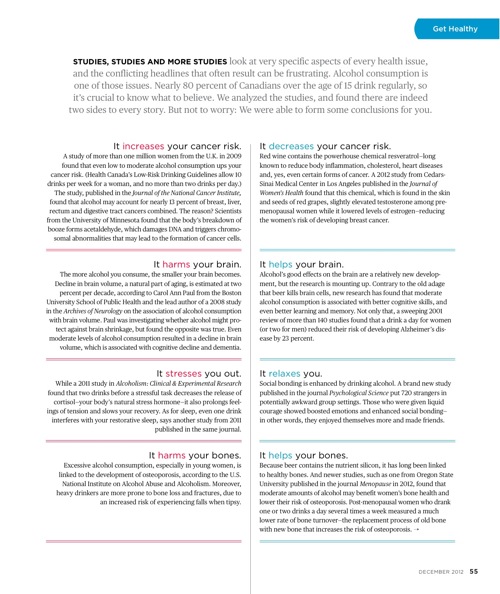 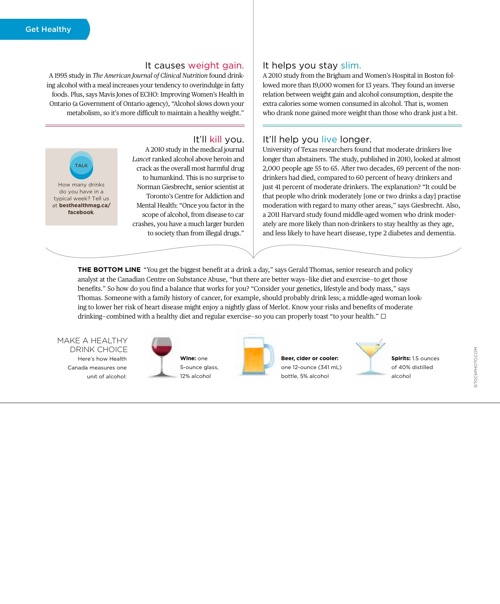