“The years pass quickly, decades, even, accumulations of arguments and interruptions and good dinners and drinks,” writes Kate Walbert in The Sunken Cathedral (Scribner), a novel that is a meditation on memory and reflection on mortality. “Here they are,” Walbert writes of her elderly characters, “sleepless and still not exhausted: everyone is raring to go when the party is almost over.”

Eighty-something widows Marie and Simone have enrolled in an amateur art class in New York’s Chelsea neighborhood, where one paints the universe and the other finishes her late husband’s rendering of the Brooklyn Bridge. Their efforts are overseen by Sid Morris, the desiccated yet seductive instructor in whom the two women find a last glimpse of romance.

Meanwhile, their younger classmate Helen, obsessed with climate change and the fraught aftermath of 9/11, draws dark inspiration from the mythical City of Ys, which, legend has it, was swallowed whole by the ocean following a fact its king’s daughter made with the devil. While Simone and Marie look quietly backward, mourning losses and grappling with what’s to come, Helen inhabits a present she sees as doomed.

Walbert excels at lyrical descriptions of a city she clearly adores, from pear trees lining a street to stinking fish in Chinatown. Like the Debussy composition that inspired its title, The Sunken Cathedral is at times moody and ephemeral as it tries to, in Marie’s words, “make something of the way life felt: the light through the filthy windows, the signs of the tattooed model, Sid Morris behind her, watching.” An inescapable anxiety, “the curse of the twenty-first century,” pervades the book and keeps each character, like the reader, off-balance. 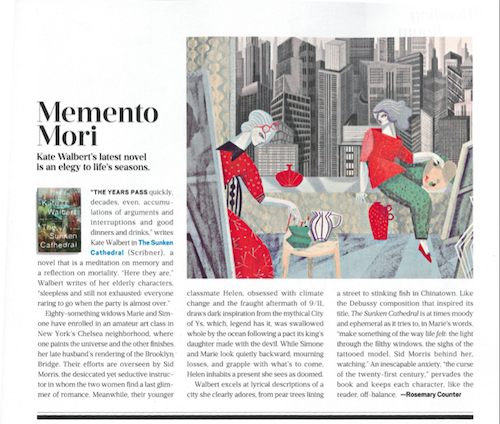