Getting youngsters excited about stashing their cash is a great lesson they can learn early. Here are some handy tips on how to ensure their futures are paved in gold

Parents hoping to raise a financially responsible adult need to start teaching healthy money habits long before they can vote—and probably far earlier than they thought. “As soon as they start asking what money is, it’s time,” says Sandra Hanna, a Vancouver mom of two and co-founder of Smart Cookies. Teaching a toddler to spend wisely is no easy task, but it’s the foundation for a money-smart kid and a lifetime of financial literacy. Here’s how it’s done.

DO: Open the topic for discussion
Too often, grown-ups consider money talk to be rude or gauche—a message sure to infiltrate impressionable little brains. “The biggest mistake I see is not talking about money at all,” says Hanna. Some parents are merely recreating the messages they received. Others lack confidence, says Edmonton personal-finance educator and author of The Prosperity Factor For Kids, Kelley Keehn, fearing “they themselves don’t have the financial literacy skills to adequately convey financial concepts.” If this is you, break the secrecy cycle and study up together by starting the conversation at the dinner table.

DON’T: Let negativity dominate
The next mistake is only talking money when it’s worrying you. “Discuss money in a positive way—not just always as a source of stress,” says Hanna. Too much “we can’t afford that!” or “money doesn’t grow on trees” reinforces money as lacking and unattainable; “we’ll save up for that!” is a much better choice. “Think of your family as a little business,” suggests Hanna. “You don’t want your employees worrying that there’s never enough, you’d want them to think you’re smart, resourceful and have a plan.”

DO: Modernize the allowance system
Many kids learn about money using the old-fashioned piggy bank system. Licensed insolvency trustee Richard Goldhar’s son, at just 18 months, already has a bank account with spending cash. “If I want my son to understand money, I have to give him money to spend.” The amount is subjective to the family—some expect kids to pay for their own snacks and entertainment, others see kids’ cash as entirely savings—but parents should be cognizant to what things cost these days, says Ontario-based Goldhar. “If the budget’s too difficult to work, kids won’t learn anything at all.”

DON’T: Forget it’s 2016
Penny-candy doesn’t exist anymore (nor do pennies!). And as more Canadians operate entirely with debit and credit cards, parents need to convey that cards equal money and spending has consequences. “Kids see Mom and Dad paying with magic plastic, so the payment has no tangibility,” says Keehn. Not ready to give your kid a Visa? Start with a gift card, suggests Hanna. “My son sees the balance go down and then run out. He understands he can’t keep what he spends.”

DO: Let them make their own mistakes
Goldhar and his family use the envelope system: “You take your paycheque or allowance and allocate savings to the bank and spending cash to the envelope.” Spending wisely is a learned skill, and sometimes parents should let kids learn the hard way. “I say ‘OK, you can have candy, but it’s gonna be harder to afford that bike’,” says Hanna. She gives a choice and lets her son make it. “Sometimes he spends and feels good, other times he regrets it. We want him to experience both.” 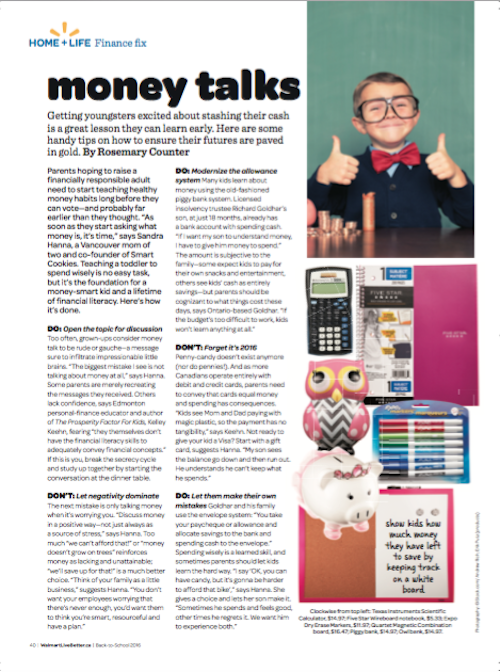