None of the above

Perhaps you recall this asinine moment: A few years ago, the Natural Environment Research Council (NERC) thought it could score some hype by crowd-sourcing the name for the United Kingdom’s new polar research vessel. The #NameOurShip contest might have come and gone without fanfare but for radio host James Hand’s mocking suggestion of “Boaty McBoatface,” which was just dopey enough for the internet to rally behind. More than 25,000 voters crashed the NERC’s site, crushing all of the more respectable competition. The silliness created a serious problem for the NERC: Should it honour the public and stand behind its gimmick-gone-wrong? Or should it override the suggestion for a more dignified moniker?

For what it’s worth, the NERC is far from the first organization to see a simple-seeming PR stunt backfire. In 2012, Mountain Dew’s campaign to name its new green apple flavour was quickly and quietly squashed when “Hitler Did Nothing Wrong” topped the charts alongside “Fapple” and “Diabeetus.” Pranksters on the bulletin boards of websites like 4chan and Reddit gleefully followed the “Dub the Dew” debacle, with one user asking the obvious question: “When will companies learn that the internet isn’t a good tool to name new products?”

The problem is that sometimes it is. Research has shown and pop culture proves many times over that consumer voting works: Lay’s chips’ #DoUsAFlavor competition, though in essence the exact same as Mountain Dew’s, ran very successfully for five years. In the entertainment world, Sharknado fans voted on Tara Reid’s fate with #AprilLives or #AprilDies. Though not always so life-and-death, this momentary power is loved by viewers and customers alike.

“We know it empowers consumers, makes them feel in control and leads to greater [brand] loyalty,” explains Tami Kim, Darden School of Business professor who co-authored the paper entitled “Procedural Justice and the Risks of Consumer Voting.” While most companies will be fine with asking for their customers’ input, a handful won’t be so lucky. “There are so many outcomes that are so unpredictable that make this strategy so risky,” says Kim. So the professor and a team at Harvard set out to study consumer voting misfires. They identified three principles that, when violated, can lead to a PR disaster.

The first is that when you open up a brand to suggestions, you’ve agreed to listen to them (the researchers call this “representation”). “You shift the relationship when you treat customers more like stakeholders,” says Kim. They assume that since you asked, their answers matter. If you reveal that their votes actually count for only 20%, like the National Football League does annually for its Super Bowl Most Valuable Player Award, and just like the NFL does every single year, you’ll face a whole lot of angry fans.

When companies don’t get the answers they want, they often resort to overriding the outcome. (Boaty McBoatface, for example, was renamed the more eloquent RRS Sir David Attenborough, and you can guess how the internet felt about that.) Kim suggests firms could skip the backlash by committing to the next principle, “non-suppression”: Within reason, they must honour the winner.

Last is “consistency,” which means once the voting can of worms is opened, consumers expect their opinions to matter from then on. Violate any of these principles, explains Kim, “and the company is actually left worse off than had it not empowered consumers at all.”

When done right, giving your customers a say has massive perks, explains Rob Finkelstein, a Vancouver-based experiential marketer. But any business considering using this risky strategy should first stop and ask why, he says. “If the company doesn’t have a good answer, then it’s probably not a good idea,” says Finkelstein, who is vice-president of Proof Experiences. Pretty much the only good answer is exposure, and that’s only if the company believes all press is good press.

Those who decide to push ahead with a gimmick like this should be careful. “Set up clear and transparent parameters for what’s acceptable, and give yourself an easy out in case you need it,” says Finkelstein. Have a “poll” rather than a “contest.” Then arm yourself with a sense of humour and prepare yourself. “If you’re going to open up voting to the whole world,” he says, “then you’d better be ready for its response.” 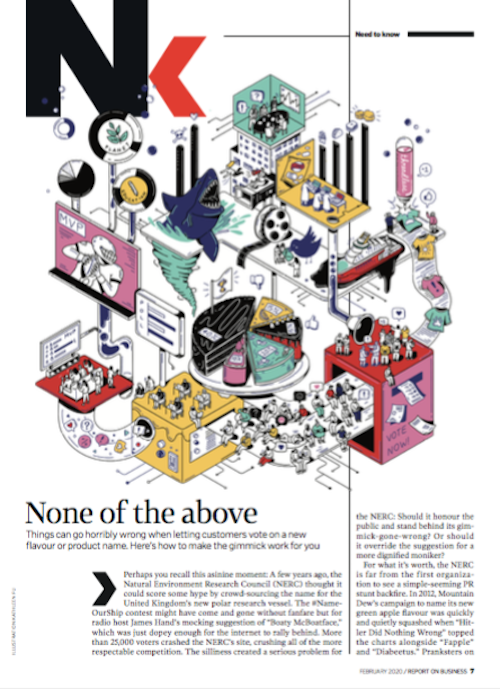 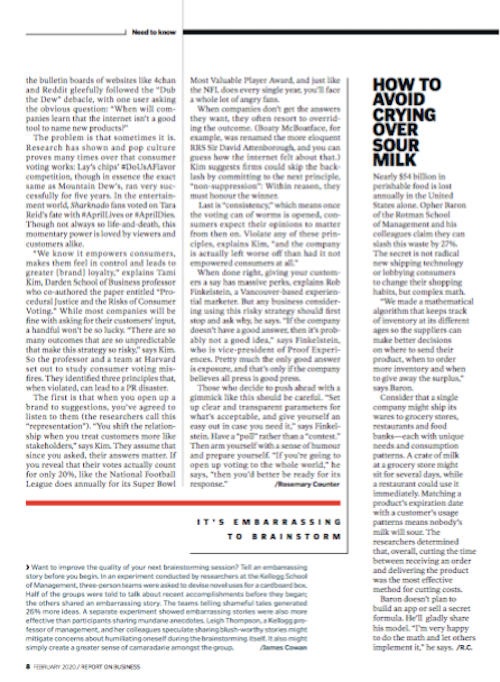