One Giant Leap for Chris Hadfield

After three tours in outer space, the retired astronaut talks about blending fact and fiction in The Apollo Murders

ICONIC CANADIAN astronaut Chris Hadfield, 62, spends summers at his picturesque cottage on Stag Island, near Sarnia, Ont. He could put his feet up and relax, but that’s just not Hadfield’s style. As his first novel, a thriller, arrives in bookstores Oct. 12, we touch base with the best- selling author on his new incarnation as a fiction writer.

ROSEMARY COUNTER: You’ve already published a how-to book, a kid’s book and a book of photography, but The Apollo Murders is fiction. Or is it?

CHRIS HADFIELD: The book revolves around Apollo 18, which was in 1973, and of course very real. In fact, about 95 per cent of the book is real, which I think will surprise readers. The malfunctioning Soviet space station that mysteriously de-orbited, everything that happened on the moon, the first Black test pilot astronaut – all of that really happened. I actually included an author’s note at the end that tells the reader what and who is real and what and who is not, so you don’t have to Google everything. I wanted the book to be a kind of delightful egg hunt to find out what’s real.

RC: Did you already know all this or did you have to study up?

CH: Obviously I know about space flight, but I was only 13 in 1973. I knew the Apollo 18 story, and then based this book very closely on what did – or could have – happened. I did do a lot of research, but to add depth, I found myself asking “Why” a lot: Why would Nixon want that? Why would Schlesinger say that? I thought a lot about the motivations, personal reasons and political pressures at play.

RC: How did you incorporate your experiences?

CH: I describe life in space the best I can, the feelings, the nausea, everything. When I didn’t have the experience I needed, I could call up a friend–I know a lot of people who have flown on Earth and in space – to ask them the things I didn’t know: What credible mechanical failure could happen on a helicopter that would kill a pilot of this particular expertise? I was crowdsourcing ideas from my friends whenever I could. It’s so important the details are right.

RC: Were you worried about getting something wrong?

CH: An astronaut’s whole life is about worrying about getting something wrong, so I’m used to that, but I try to remember there’s no fiction writer in the world in a better position to write this book than I am. If someone catches me in a mistake, I’ll be impressed. Good for them.

RC: You started in detailed reality and then added fictional elements. How so?

CH: I worked within this rich, amazing framework, and then I imagined my main protagonists, Kaz Zemeckis and Father Ilarian. I knew I needed a credible and likeable protagonist who survives, in case I wanted to write a sequel, so this became the character of Kaz: a former test pilot, grounded because of an accident, a flawed but confident person. I looked to James Bond and Sherlock Holmes for inspiration about imperfect narrators. Holmes was addicted to morphine!

RC: What other books inspired you?

CH: I’ve never written fiction before, so I started there by re-reading the fiction I admire. I read Tom Clancy and Edgar Rice Burroughs and Jonathan Kellerman. I read The Day of the Jackal and Eye of the Needle, both beautiful and effective novels. I loved Stephen King’s book on how to write and I watched James Patterson’s MasterClass on writing.

RC: Did you get any advice on writing from your famous friends?

CH: I actually got my best writing advice from Neil Young. He called me while I was up on the Space Station. Neil was in the back of his hybrid 1959 Lincoln Continental. We showed each other around before we got to talking about song writing. He said, “Don’t write ‘a song,’ just write something down.” He meant everyone writes bad songs, even him, and you can’t let that stop you from even starting. The other person who helped me constantly was my wife, who walked with me every day and listened to me talk and talk and talk about the story. She was full of “What about this? Maybe you could try that!” She was full of ideas and always in my corner.

RC: What is your writing process like? Take me through a regular writing day.

CH: I like to wake up at 6 a.m. and start by getting some exercise before I sit down at my desk, which my wife ac- tually built for me. I need to have all my urgent issues dealt with – I don’t know what it’s like for anyone else, but I can’t write if I’m worried about something else. I can’t have anything in my physical or mental inbox when I write. I read what I wrote the day prior, and then I try to write 1,000 words by about 1 in the afternoon. Some days I get lucky and get up to 3,000 words, and others I would have none because I ended up chasing some ran- dom detail. I tried to resist that urge and just write and keep going. I don’t even know how to punctuate very well, to be honest.

RC: I bet your editors loved that! Tell me about that process.

CH: My original book was 195,000 words. If that doesn’t mean anything to you, just know it’s a lot. So the first thing my editors did was edit it way down to about 130,000 words, which admittedly stung at first. I took a bit of umbrage when I opened the first draft. Didn’t they know that every word was sacred?! I’ve since learned they were right. I wish I could write effortlessly and perfectly, but nobody can. Mary Shelley went on these huge 25-page tangents about the surrounding terrain, which had absolutely nothing to do with the story.

RC: Tell me the truth: Is it harder to be a writer or an astronaut?

CH: Ha! Seriously? It is much, much harder to be an astronaut. Anyone who is literate can be a writer, if you have a story to tell. I’m not the best writer in the world, but I think I’m good enough that I hope a lot of people will enjoy this book. If I get something wrong here, nobody dies. For me, these are low stakes. I might figuratively go down in flames, but it’s only figurative, so I’m not worried at all. 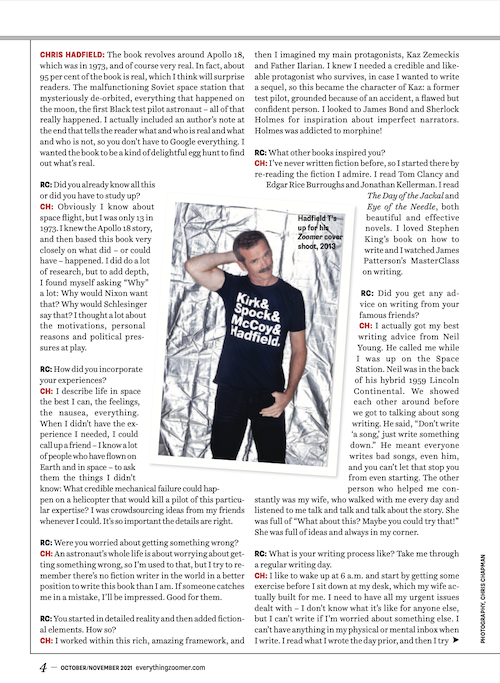