Upon the fanfare-filled publication of The Favourite Game in 1963, Leonard Cohen unabashedly told reporters it wasn’t his first foray into fiction. “He called it ‘a third novel masquerading as a first novel’ – meaning there were predecessors,” says Michael Posner, whose third volume of a trilogy, Leonard Cohen, Untold Stories: That’s How the Light Gets In, comes out Nov. 22.

Six years after the famed troubador’s death, the once-rejected novel will finally be released into the world. A Ballet of Lepers is a vivid, haunting, experimental and quintessentially Cohen-esque novella, penned somewhere between 1956 and 1961, which tells the story of an unnamed mid-life bachelor who moves his violent grandfather into his Montreal boarding house. The novella is followed by 15 short stories and a radio play, all uniquely distinct, except for some form of Cohen alter ego in each one. Each piece was plucked with precision from the archives at the University of Toronto by Cohen scholar Alexandra Pleshoyano, who edited them with a modern eye and much care, and compiled them into Cohen’s second posthumous work.

The other, The Flame, a collection of poems, lyrics and sketches, was published in 2019 to mixed reviews. It had “a little of everything for Cohen fans and nothing for anyone else,” a New York Times reviewer wrote in a scathing take on the “monotonous scribbles of the moody undergraduate.” Whether Cohen was a genius or a neophyte in whatever medium he chose – fiction, poetry, art or music – is a sentiment that always followed him. “Leonard, we know you’re great,” the head of Columbia Records famously quipped in 1984. “But we don’t know if you’re any good.”

Readers shouldn’t expect to finish this book with any clarity into the ultimately unknowable artist, which is kind of the point. “There’s something totally ineffable about Cohen, but it just contributes to our fascination with him,” says Posner, a Toronto-based writer. He argues that, when it comes to posthumous publications, maybe harsh criticism isn’t fair since the author never signed off on the work. “There will always be people who ask if Leonard Cohen himself would have given his blessing to publish this book,” says Posner. “We’ll never know.” Cohen was a notoriously slow writer and meticulous about every word, which makes peeking at a raw draft even more alluring. “With Cohen, there are always areas of ambiguity, so we can just add this book to the list.”

How perfectly poetic that Cohen is long gone and yet still with us, a dichotomy he would have appreciated. “Cohen was so interested in an or- chestration of opposites,” Posner says, citing popular works like Beautiful Losers and Parasites of Heaven. “He uses contradiction and paradox, right there in the title, and Ballet of Lepers is no different.” As always, complex and contradictory themes like love, longing, rejection, demons and desire are woven throughout, and only time will tell if his 60-year-old writings will resonate today. For the record, Columbia did eventually release Cohen’s seventh studio album, 1984’s Various Positions, which included “Hallelujah,” now one of the most covered and beloved songs of the past century. The deceptively simple song took seven years and 180 verses until Cohen got it just right. 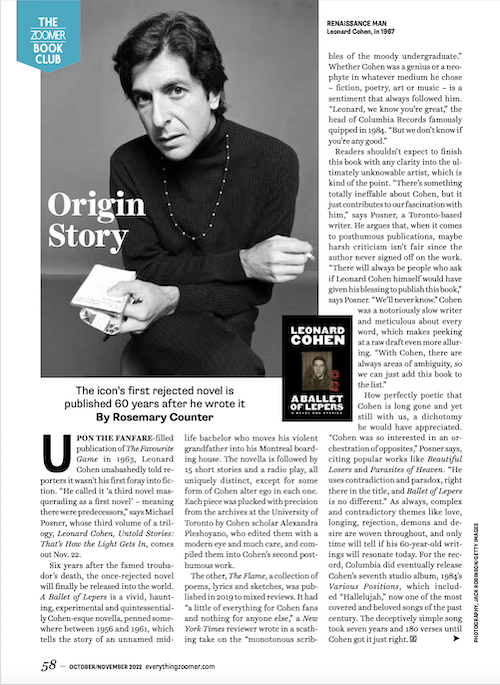