Is your kid always hunched over a screen?

For as long as she can remember, Donna Ng’s son Cam has had terrible posture. “Even when he was a baby, he hunched a bit and his knees and feet were pronated,” says the hospital clerk from Ajax, Ont. Put an iPhone or Nintendo DS into his now-10-year-old hands, however, and the problem is exacerbated. “Whenever he’s playing a handheld game, his posture is worse than ever,” says Ng.

Like every parent throughout the history of time, Ng has ordered Cam to “sit up straight” hundreds upon hundreds of time. And like most kids, Cam sits tall for a minute and then promptly forgets and slumps. With a situation as common for tweens as pimples—no official Canadian stats exist, but a 2012 study from the Indiana-based National Posture Institute found about 38 percent of children between the ages of four and 12, most of them boys, demonstrate poor posture—how do parents know when a bad habit becomes a real problem?

For Ng, it was the moment Cam mentioned pain. “He was complaining of lower back and leg pain, which I put entirely on his posture,” says Ng. According to Alison Anthony, a physiotherapist in the orthopaedics program at Toronto’s Hospital for Sick Children, “not all kids need to see a physiotherapist, but if your child is in pain, we can take a look and see the role posture is playing.”

Normally when kids stand, their ears should be lined up with the middle of their shoulders. Bad posture comes in many forms including protruding scapula (poking shoulder blades) and lumbar lordosis (swayback), but kyphosis (or round back) is the distinctive variety from bending over gadgets: “We see more children standing with a rolled shoulder, their heads tucked forward,” says Anthony. “Then the muscles in the upper back have to work harder, which can lead to soreness, pain and headaches.”

Poor posture is also linked to mood, confidence and depression. Anthony appreciates how hard it is to break the cycle: “Kids slump, they watch too much television, they lack energy, they slump some more.” Cam also experienced attention and behavioural issues, which didn’t surprise his mother one bit. “Obviously when something hurts, you’re bothered and you get grumpy.” So two years ago, at age eight, Cam began seeing a chiropractor. “He’d get his neck and back adjusted, followed by a light massage,” says Ng. Cam’s treatments—softer on growing bodies than the grown-up version—leave him feeling better on many fronts. “For a few weeks, he walks a little taller and straighter, and he’s even better behaved.”

Unless your kid complains of back or neck pain, experts say a visit to a professional isn’t necessary—there are many other ways to encourage healthy posture. Consider investing in a child-sized desk and chair that encourages upright posture. “The chair should support his back and his feet should reach the ground,” says Anthony. If your tween works at home at the dining room table, watch out for him perching on the seat’s edge and slumping forward. A pillow behind his back and small footstool should help provide extra support.

You can also use tech in your favour and make movement a game by setting a timer to go off every 15 minutes during screen time. “When it buzzes, everybody straight- ens and stretches,” says Anthony. Even better, however, is to turn off the gadget altogether and get moving. “Poor posture isn’t necessarily caused by what kids are doing as much as what they’re not doing,” she says. Tween bodies are made to move and stretch. So take a walk to the park and swing—it’s particularly good at strengthening core muscles. Says Anthony, “The most important thing in terms of back health is keeping kids active.” 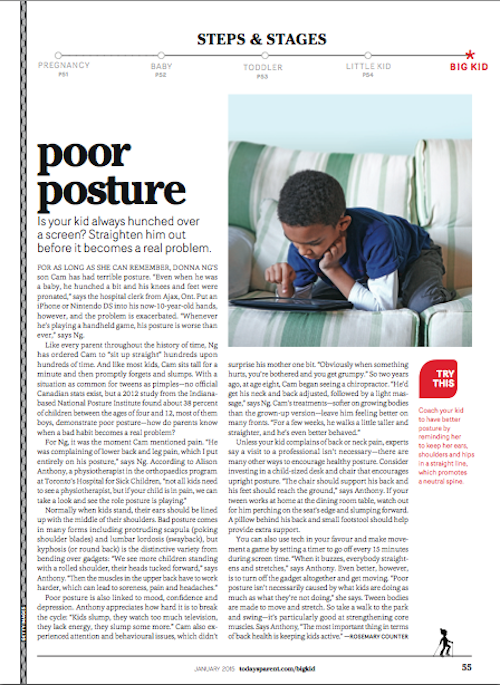