Peter Aprile has always found the legal profession to be behind the curve — even as a law student, more than a decade ago, at Queen’s University. “We didn’t have a place for students to access the entire Income Tax Act electronically,” recalls his former tax professor Kim Brooks. “Out of love for the subject, Peter loaded an electronic version onto a CD-ROM.” Aprile’s urge to merge law with technology never faded.

After graduating in 2005, he articled at Fitzsimmons & Company, a four-lawyer tax firm in Toronto. He got hired back as an associate, and, three years later, the firm’s founder, Richard Fitzsimmons, had a heart attack and died soon after. Losing his mentor left Aprile heartbroken. “I will always owe Richard a debt.”

With Fitzsimmons & Company gone, Aprile decided to launch his own firm. Now called Counter Tax Lawyers, it’s office is in Toronto’s Summerhill neighbourhood, which is “right around the
corner” from the 40-year-old’s home, where he lives with his interior-designer wife and their two young children. It now stands as a leader in tax-dispute litigation — largely because of how heav- ily Aprile invests into cutting-edge technology.

“If you want to survive in any industry, you better be doing something different and you’d better be doing it better than everyone else,” says Aprile. His claim to fame is building proprietary software that simplifies and streamlines complicated tax files — an industry first.

“I think that Richard always knew that I was going to create some- thing new,” he adds. And he has proof: after Fitzsimmons hired Aprile, he gave him a copy of his book on tax law, adding an inscrip- tion that reads, Commit the entirety hereof to memory, and then forget it all and write your own story. “I read that inscription a few times a year and smile.”

Tanya Walker: Of all places, lawyers John Campion and Tanya Walker met in Saturday-morning spin class. “If I’m not working, I’m there,” jokes Walker, the 38-year-old founder of her own Toronto-based commercial-litigation firm. When Campion, a four-time bencher at the Law Society of Upper Canada, met her, he saw “an opportunity to encourage a brilliant, worldly and diverse lawyer to run for bencher.”

Walker is just that. Since announcing (at four!) to her Jamaican immigrant parents her plan to be a lawyer like Clair Huxtable, Walker earned a business degree at McMaster University and then attended law school at Osgoode Hall. “We didn’t have deep pock- ets, but my parents did give me the push to work hard.” She resolved to graduate with minimal debt and own a home within two years — she did, and now shares a Harbourfront condo with her ever- supportive partner, Daniel. “It must be so tough to date someone as busy as me,” she laughs, casually counting her hours — 70 to 80 a week — on perfectly manicured purple nails.

Running her own firm for five years is all-absorbing, but balance has always been important. In her student years, she spent months backpacking through Europe. Even now, she says, “I organize my time very well and try to take a break every four months.” Walker has visited 40 countries.

The next chapter of her career will be historic. On Campion’s advice, she ran for bencher last spring — and though she came up just short, she is expected to become one this June when the current treasurer’s term ends, creating an opening in the bencher ranks. This will make Walker the first black female to be one of the Toronto benchers in the Law Society’s 219-year history. “In a way, I can’t believe it,” she says, wiping away tears. “It really warms my heart that so many people believe in me.” 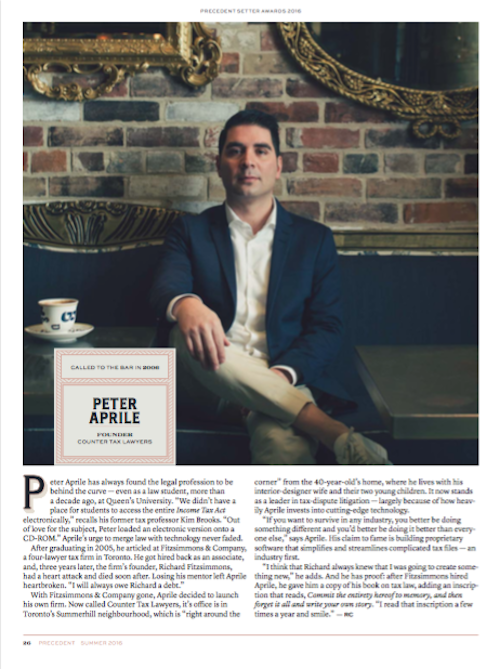 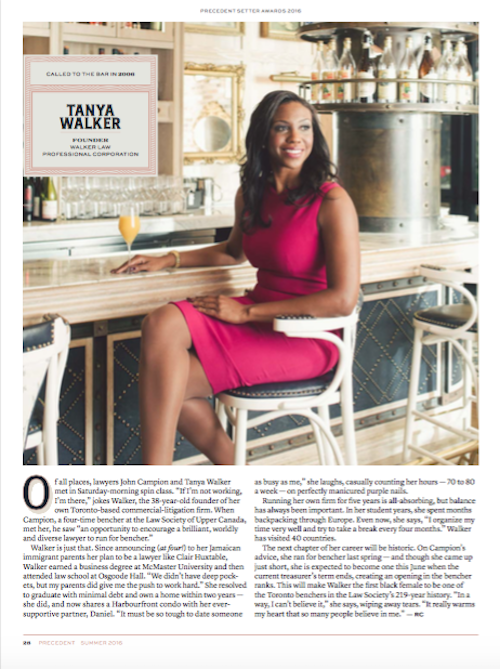