Sleeping single in a double bed: Are sweet dreams made of this?

They met on Friday the 13th, but Laura Davey has had nothing but good luck with Richard, her handsome IT-consultant boyfriend—well, mostly. After a few dates, they ran into a bitter ex who turned to Davey and said, “A girl needs her beauty sleep, and you won’t be getting any.” It was a puzzling comment at the time, but several weeks later, her snide little jibe made sense. The 27-year-old Toronto salon manager discovered that her perfect guy was an unapologetic snorer.

“After our first sleepover, I was shocked that a human was capable of making those sounds,” says Davey. Blissfully unaware of his sonic rumblings, Richard snored until Davey used her cellphone to record the evidence. Confronted with the damning audio file, he agreed to wear those awkward nasal strips and sleep on his side, but neither intervention helped.

By the time the couple shacked up a few months later, with him routinely being exiled to the couch, they broke down and bought a futon sofa. And when the lease on their one-bedroom apartment expires this spring, Davey and her boyfriend will be looking for a new place—with two bedrooms. “It may look weird—like, ‘What are you guys, roommates?’” she jokes. “But that’s okay.” However, it’s not as strange as Davey may think. According to a 2005 study from the National Sleep Foundation in Washington, D.C., nearly one in four couples sleeps in separate bedrooms. And, though we may not discuss it at dinner parties, separate sleeping is so popular that the U.S.-based National Association of Home Builders has taken notice: By 2015, 60 percent of custom-built luxury homes will have two master suites.

Her clients never come right out and say it, but Ruth Hanson, a real estate consultant with Prudential Sussex Realty in Vancouver, has spotted this trend. “Clients beat around the bush a bit, but I notice that they take a good long look at the guest bedroom,” she says. For Hanson, separate bedrooms are a luxury for those who can afford it. “It takes two incomes to buy a nice home and, with two professionals in the house, they both need a good night’s sleep,” she says. For Paul Rosenblatt, author of Two in a Bed: The Social System of Couple Bed Sharing, this trend among younger couples may stem from platonic school shack-ups that turned sexy. “Some of them start out as housemates—maybe four students renting a place—and then a couple starts having sex,” he says, “but that doesn’t mean that they give up their own rooms.” Other possible explanations include the fact that we’re marrying later, so we’re accustomed to more privacy. Women are also more assertive when it comes to their sleep needs, suggests Dr. Charles Samuels, medical director of the Centre for Sleep and Human Performance in Calgary. “The tolerance for male behaviour is down,” he says. “Women won’t put up with sleepless nights.”

For equality’s sake, women snore too, but it’s mostly men, admits Samuels. We’re not entirely innocent, though. “The number one symptom of fragmented sleep is irritability,” he says. Even one night of missing your baseline—which varies from six to nine hours—can have consequences on your body and brain. “The next thing to go is your concentration and your ability to focus on tasks,” he says.

Or, as Davey puts it, “If he lets me get my sleep, I won’t be a troll in the morning.” Her boyfriend agrees: “Anything that stops me from getting punched throughout the night is worth getting booted out of my room,” he says.

But it’s more than just restless nights that has Davey craving a room of her own; she is a self-professed closet hog, prefers her white sheets without stray chest hairs and is unimpressed with lax male cleanliness standards. “If he has his own bedroom, he can throw his socks all over the floor and have all his computer gadgets everywhere and I won’t mind,” she says. There will be no need to hide the extra sheets and pillows when people visit, and they won’t worry about gossipy guests speculating about their sex life. (It’s great, if you must know.) For Davey, having separate bedrooms promises to be the live-in dream.

But is it, um, normal? Christine Fall Moore, a Halifax-based couples counsellor, pauses before she answers: “Yes, it is—if both partners agree.” We all have notions of what coupledom should look like, but as long as one party isn’t feeling rejected, couples can and do sleep apart without necessarily fast-tracking to Splitsville. “There’s a big difference between sleeping and intimacy,” says Moore. “Intimacy is two people being together, connecting and sharing time together; sleeping is just sleeping.”

Snuggly sleepers, however, disagree. “For five years, my husband left home at 2:30 a.m. for work,” says Emily, a happily married magazine editor. “I’d wake him up when I went to bed at 11 p.m. and he’d wake me when he left in the middle of the night.” But, unlike what mattress infomercials might have you believe, the wake-ups were far from destructive. “We often had lovely chats in the middle of the night,” says Emily. “It was an intimacy that I wouldn’t trade for a solid night’s rest.”

Davey worries about a loss, or lack, of intimacy, but she follows Moore’s suggestion to schedule time for snuggles—sexual or otherwise. “I still worry that he’ll find a girl who won’t mind that he snores,” she admits. “Or maybe he’ll decide that he wants to be with someone who doesn’t kick him out of bed.” Whether they snooze soundly ever after or she morphs into the next sleep-deprived ex, one thing is for certain: In the meantime, a good night’s sleep can’t hurt. 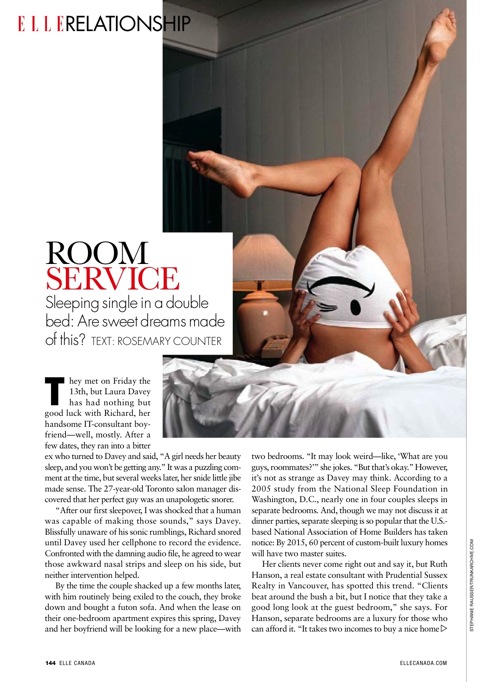 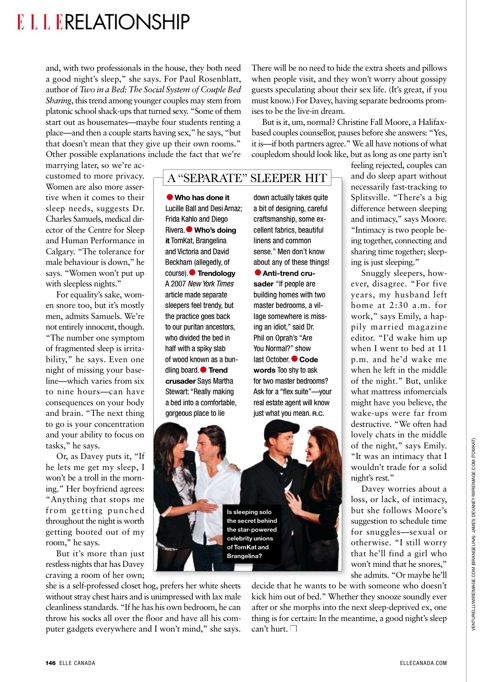