A Room with a Skew

Trina Sandhu, along with her husband, growing family and French bulldog, had long been house-hunting in Toronto when she stumbled on a listing for a near-perfect space: a large, bright, century-old home with three spacious bedrooms, four bathrooms and a cozy basement with walkout to a large yard. “In the pictures, it looked like a beautiful fully renovated house,” she says. They immediately booked a showing.

In real life, the hardwood floors were so worn they needed to be ripped up and replaced, rough ceilings were faded and stained, and a seemingly open kitchen was actually a galley (in unusable condition no less). “We came to the conclusion that the whole place was a teardown,” says Sandhu, who left disappointed and didn’t make a bid.

Wide discrepancies between advertising and reality in the real estate world are so ubiquitous that they’ve become normalized for sellers and expected by buyers—to a point. As the market climbed over the past couple of decades, and as newer technology allows it, cosmetic tweaks and touch-ups have given way to wide-angle lenses and virtual staging that some feel is akin to distortion or even deception. Now, perhaps out of desperation as markets cool, sellers of imperfect homes resort to the same tactics lest their listing be overlooked entirely. It’s not unheard of for a six-foot basement ceiling to appear soaring and a postage-stamp backyard to appear an oversized lot. Photographs are sharpened, brightened and edited—even if buyers like Sandhu can’t quite put their ﬁnger on how. “It’s all somehow smoothed out so the house didn’t look so old and broken down,” she says. “I’m totally certain the photographs have been photoshopped.”

If she were inclined (which she’s not), Sandhu could call the Real Estate Council of Ontario to complain about the seller’s representative. “Realtors, of course, can’t falsify information in their advertisements, but this gets a whole lot more complicated in photos and even harder in videos,” says RECO’s registrar Joseph Richer. Deceptive or misleading advertising is prohibited by Ontario’s Real Estate and Business Brokers Act from 2002, a lifetime ago in both cameras and computers. “The government is currently renovating the legislation, and we want to make certain it reflects new technologies,” says Richer.

The Real Estate Council of British Columbia has tried to do just that with this 2013 addition to its “Professional Standards Manual”: “Photo-enhancing computer applications make it easy to manipulate photographs in a variety of ways,” it reads. “While editing out such items as a garbage can or an automobile parked in a driveway would be acceptable, removing nearby power lines or changing any physical characteristic of a property such that it results in a misrepresentation would not be acceptable.” With MLS data now public, a simple click reveals a home’s listing from ﬁve or 10 years ago—before ultra-wide lenses and photo-editing transformed the industry.

“A decade ago, we were taking professional photos and doing the best we could,” says Vancouver realtor Kim Taylor. “Now we have drone photography and interactive floor plans and 360-degree virtual tours.” To Taylor, these developments are beneﬁcial to all parties. “All these tools are a good thing—for buyers and sellers—because it’s more information up front,” she says. “The more of this, the better—assuming it’s all true.”

Truth in advertising is a murky line that shifts as technology offers greater possibilities. “I can add an ocean view to a country house or put a sailboat in your living room if I want to,” says Rob Moroto, a master commercial photographer and virtual stager in Calgary. Moroto’s philosophy is always to shoot things as they appear, but since he’s selling a service to a client, he’ll photoshop on a realtor’s request. Sometimes that’s removing a visible family portrait, or smoothing a rough patch on a wall, or adding a working pot light atop a broken one. He once changed a “Jem-and-the-Holograms hot-pink wall” into a more muted and sellable white.

Provided there’s disclosure, says Moroto, his work is not misrepresentation but a digital extension of the long-standing practice of staging. “It just helps buyers envision the space to see what it could be.” Imagine, for example, a small seven-by-seven-foot room that many buyers would dismiss as unusable. With virtual staging, Moroto can depict it in any number of ways—an ofﬁce, playroom, piano room, library—to let would-be homeowners see endless possibilities.

And even the fanciest of photography is no substitute for an on-site visit. “If you walk in and the floors creak or it has a funny old smell, that’s not the photographer’s fault,” Moroto says. The age of the home and room measurements should give buyers these hints in advance. Trouble is, few bother to read them in a fast-moving industry, where a property could be sold by the time you pull up to the open house. “People look at locations and photos and that’s all. Rarely do they read the descriptions,” says Moroto.

When altered photos lure a would-be buyer to see a house in person—the whole point of commissioning professional photos to begin with—unenhanced real life can feel anticlimactic. “I’ve seen it so many times,” says Dan Balm, a broker in Toronto. “The buyers walk in and their balloon just deflates. I hear a sad trombone.” His best advice: “Take the pictures as a hint, but that’s it.”

Client frustration is a small consequence compared to other much worse potential situations; a house bought sight-unseen, for example, could result in a lawsuit. For the realtor, it could lead to public and professional embarrassment, like it did for one unlucky agent in 2014, when his property landed in the Toronto Star beneath the headline “Did this Mississauga mansion photo go too far?” (A vast cobblestone driveway did not go half as far in real life as it appeared to in the promo photo, though the photographer adamantly maintained the image was not photoshopped.)

When real estate photography gets too good, regular photographs of real homes can’t compete. “Up until a few years ago, I took all my own pictures with a regular camera,” says Steven Fudge, sales rep with Bosley Real Estate in Toronto. When wide-angle lenses became the norm, Fudge reluctantly upgraded. “I’m caught in a trap today because if I use a normal, conventional photograph, people might not even look twice at it.”

That homebuyers are so reluctant to envision themselves anywhere but an unlived-in show home is a symptom of our time. “We’ve been brainwashed by the rise of HGTV, and it’s reshaped the real estate industry,” he says. “Buyers expect to step into a manufactured, aspirational lifestyle, and sellers are penalized if they don’t want to buy into the process.” As part of physical staging, Fudge offers what he calls “style enhancement,” that is, adding “on-trend” pieces to the home’s real-life furniture. With his photos, he tries to promote the best and most unique features of a property, rather than resorting to tricks that make the home appear to be something it’s not.

Real estate agents operate on the honour system, if only because applying arbitrary and subjective rules would be a logistical nightmare. “It wouldn’t hurt to have rules,” says Balm, “but how? How do you draw a line about manipulating photos and how do you enforce it?” For now, Richer’s team at RECO is ﬁelding complaints on a case-by-case basis; strikes one and two get warnings while the third could result in a ﬁne. “If you notice someone doing this a lot,” says Richer, “of course we want to know about it.”

That said, he adds, buyers should remember that they’ll soon ﬁnd themselves on the other side of the equation: “One day you’ll be on the seller side, and I promise you’ll want your house shown in the most flattering light.” Good point, yet prospective buyers like Sandhu won’t soon forget their sense of frustration when flattery crossed into outright deception. “I understand that you need a wide-angle lens to show a room,” she says tartly, “but you shouldn’t be able to make a galley kitchen look like an open one.” 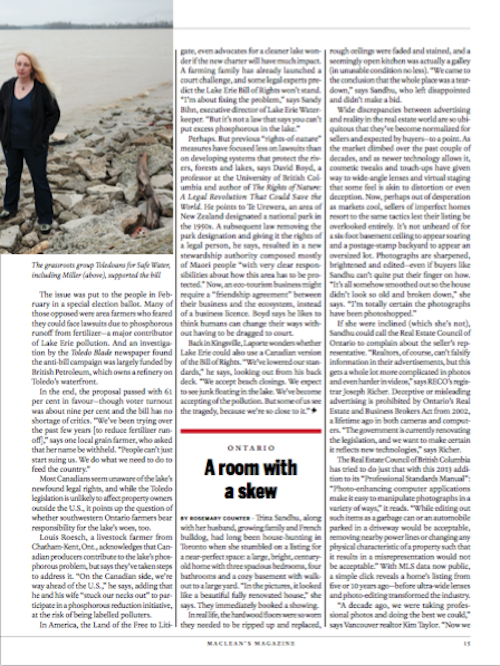 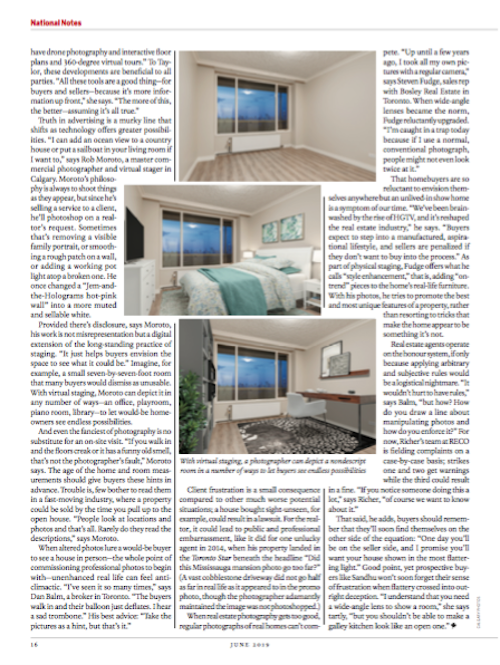