The couple’s cross-country tour winds up with a rootin’ tootin’ bang at the Calgary Stampede, along with some family memories for Kate

The last stop in the last city of the 2011 royal tour will be Calgary, which the duke and duchess of Cambridge will visit from July 6 to 8. The main event here will be the Calgary Stampede, which William will officially open on July 8. Gossip swirled that the prince would marshal the parade that kicks off the 10-day rodeo, but Canadian humanitarian Rick Hansen scored the official marshal position. The marching bands, cowboys on horseback and First Nations in traditional regalia usually attract more than 350,000 Calgarians and tourists, plus two million viewers across the globe—a number that’s bound to rise this year with the royals in attendance.

Sources say William will also attend a science demonstration with a group of youngsters at the Calgary Zoo. As for Catherine, Calgary might be one town where her history outshines that of her new husband. According to genealogy website Ancestry.ca, Kate’s grandfather Peter Middleton—who died last November, just days before the official royal wedding announcement—was stationed for a while in Calgary in the Second World War. Middleton was a Mosquito pilot and flying instructor with the Royal Air Force. The only remaining building of the school where he taught now houses the Aero Space Museum of Calgary.

They might also make their way to the Military Museums—a collective of eight museums and archives including one for each of the navy, army, and air force—which last year acquired what’s believed to be the world’s largest single acquisition of military research material from the British Ministry of Defence. Unable to catalogue and store the mound of items now known as the Chicksands collection, the ministry gave the museum more than 600 boxes filled with 50,000 artifacts—including a czarist-era Russian field marching manual and a printed tribute to Napoleon Bonaparte. The donation made the museums one of the premier research institutions in the world.

The newlyweds may also stop at the famous equestrian facilities at the foot of the Rockies, Spruce Meadows. Also one of the country’s premier centres for conferences and meetings, it houses 14 major tournaments each year, welcoming virtually every Olympic, world, European and national show-jumping champion. If they go, Will and Kate will be in time to see the North American Tournament, featuring the best show-jumping athletes from the Americas.

And what would Harry do? A sure destination might be Cowboys nightclub, where cowgirls have been known to dance on the bar and where one lucky hostess caught Harry’s fancy during a visit here in 2007. As for the hangover cure in this town, forget the greasy-spoon bacon and eggs standby. Cowtown is all about beef, and Calgary’s Tubby Dog (window service available until 4 a.m.) offers a classic takeaway, served with homemade chili and bacon. 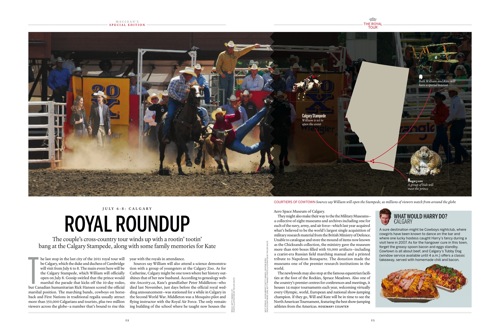