Unpasteurized milk is better, argues outlaw milk farmer Michael Schmidt, and he’s willing to go to the Supreme Court to prove it

Despite numerous guilty verdicts, rogue milk farmer Michael Schmidt will not back down. He will not pay the $55,000 in fines, and he won’t cease selling his illegal product. “It will go to the next level,” he explains in his thick German accent. “Appeal Court, Supreme Court; I might as well go.”

If Schmidt seems unrepentant, it’s because he’s guilty: for years, he’s been distributing raw unpasteurized milk to 200 local families from his small Durham, Ont., farm in a quasi-legal cow-share operation, where customers literally buy the cow and get the milk for free. This violates the 1938 Milk Act, which made the selling of raw milk illegal in Canada (the only G8 country to do so). But with the new popularity of the green and organic movements, publicity and sales “going up a lot,” Schmidt is no longer flying under the radar.

The Ministry of Health immediately released a stern statement following a 2006 raid on Schmidt’s farm: “Make no mistake about it—drinking unpasteurized milk is not good for you.” Raw milk can carry salmonella, E. coli, and listeria, they say, citing 117 cases of enteric illness associated with unpasteurized dairy in Ontario since 2005. Disease-causing bacteria can cause many transmissible diseases, including “mild illnesses, long-lasting serious diseases, and even death.”

But for Schmidt’s customers, raw milk is a superior product being crushed by a monopolizing dairy lobby. They believe pasteurization—the process of blasting milk at 72°C for 15 seconds to kill bacteria—also eliminates healthy antibodies, natural enzymes, and vitamins. Advocates say it’s good for people with lactose intolerance, and can even calm symptoms of attention deficit disorder. Plus, it’s delicious: “It’s richer, sweeter, not so watery,” says Schmidt. “It’s what milk’s supposed to taste like.”

“He’s a great marketer,” says Bill Mitchell, spokesperson for the Dairy Farmers of Ontario. Mitchell has a 20-year history with the farmer, including Schmidt’s claim he was ignored when he offered to work with the dairy industry to produce safe raw milk. Despite what Schmidt wants you to think, says Mitchell, this is not a dairy industry issue, it’s a health issue: “A guy from an unlicensed farm selling unpasteurized milk in mason jars he washes by hand is an outbreak waiting to happen.”

For others still, whether raw milk is safe or not, it’s a basic human right for informed consumers to choose what they eat. “People should not think this is a milk issue,” says Schmidt. “It happened to be milk in my case, but the real problem is the government infringing on people’s rights.” Schmidt filed a challenge under the Canadian Charter of Rights and Freedoms in June.

Somewhere between every Canadian’s right to consumption and absolute prohibition is the only workable solution: an effective system of regulating raw milk (and its defiant producers like Schmidt, who will surely sell it anyway). For informed consumers who know its real risks—not just its lore of benefits—legal raw milk should be nothing to cry over. 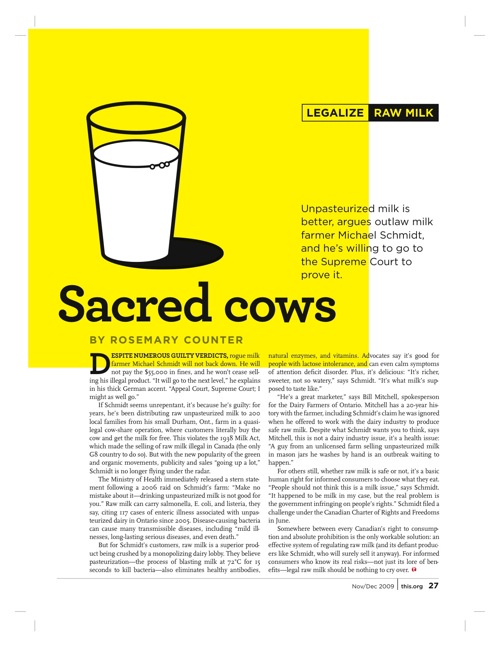