If crowded malls make you cringe, catch Santa at one of his many other Toronto hangouts.

SANTA AT THE TORONTO CHRISTMAS MARKET IN THE DISTILLERY DISTRICT, NOVEMBER 28 TO DECEMBER 21
Little believers can stop by Santa’s house, where the big guy can be found between 10 a.m. and 7:30 p.m. on weekends and 2 to 7 p.m. on all weekdays, except Mondays (even Santa needs a day off!). A photographer is on site to capture the magic and you can offer a donation to receive a print. Free.The Distillery District. torontochristmasmarket.com

SANTA AT 100 YEARS OF CHRISTMAS AT CASA LOMA VARIOUS DATES IN DECEMBER
Happy birthday, Casa Loma! Festivities include live performances of The Snow Queen, a holiday scavenger hunt, winter- themed arts and crafts, live carolling and—of course—Santa in his workshop. He’s around on weekends and holidays from 9:30 a.m. to 4:30 p.m, and you can purchase the on-site photographer’s shots. General admission, $27; children, $17. 1 Austin Terrace. 416-923-1171; casaloma.org

SANTA IN THE JUNCTION, DECEMBER 7
Head to the west end for Santa’s arrival via fire truck at 11 a.m. Deliver your wish list and snap some pics, then enjoy the holiday activities, which include listening to Mrs. Claus read stories, a reindeer scavenger hunt and roasting chestnuts while enjoying hot chocolate. Free. 2964 Dundas St. W. (between Quebec Ave. and Indian Grove). thejunctionbia.ca

FARM FOR THE HOLIDAYS, RIVERDALE FARM, DECEMBER 13, 10 A.M. – 3 P.M.
See how our barnyard friends are celebrating Christmas at Riverdale Farm. There’s no admission fee, but they do suggest you bring a charitable donation for a local shelter. Arts and crafts include making cranberry- popcorn wreaths, decorating gingerbread cookies or hand-dipping candles, all while Santa makes the rounds. Bring your camera for a pic with Old Saint Nick. Free. Riverdale Farm, 201 Winchester St. 416-392-6794

MARIPOSA SANTA BRUNCH CRUISE, TORONTO WATERFRONT DECEMBER 21
In collaboration with the Toronto Port Authority, Mariposa will host Santa for a tasty brunch on the Sunday before Christmas. Expect crafts and carolling, plus complementary photos with the big guy. General admission, $49; children six to 12, $25; kids younger than six get in free. Leaves from Pier 6 (Queen’s Quay and York St.). 416-203-0178; mariposacruises.com

THE SANTA TRAIN, YORK-DURHAM HERITAGE RAILWAY
SATURDAYS & SUNDAYS FROM NOVEMBER 22 TO DECEMBER 14 (EXCEPT ON NOVEMBER 29)
Head to Uxbridge and hop aboard the 11 a.m., 1 p.m. or 3 p.m. trains for an hour of mix and mingle with Santa, while clowns and a magician make the rounds. Don’t forget your camera. Tickets, $20; family of four, $74. 19 Railway St., Uxbridge. ydhr.ca

SANTA 2.0: FIND THE MAIN MAN OF THE SEASON ONLINE!

Kringl Ap, for iOS and Android
Launched last year, this Canadian app—made in collaboration with the Make-A-Wish foundation— lets you transport Santa in action into your own living room. Little unbelievers will go wild. Free (suggested charitable donation to Make-A-Wish instead), kringlapp.com

Letters to Santa, for iPad and iPhone
Still writing letters and mailing them to the North Pole? That’s quaint, but Santa’s modernized now. With the downloadable app “Letters to Santa,” little ones write their wishes and fire off the note(s) right to Santa’s inbox. Unlike snail mail, users can expect a
reply in two to six hours. Free for a limited time, iTunes.ca

Google Santa Tracker
It’s the 10-year anniversary for Santa Tracker! What was once a sweet and simple idea from a Google-NORAD partnership is now a full-fledged online interactive Google winter village with mini games, music and an elaborate Google Map for keeping tabs on Mr. Claus’s journey. (As of press time, he was relaxing on a Caribbean island.) google.com/santatracker 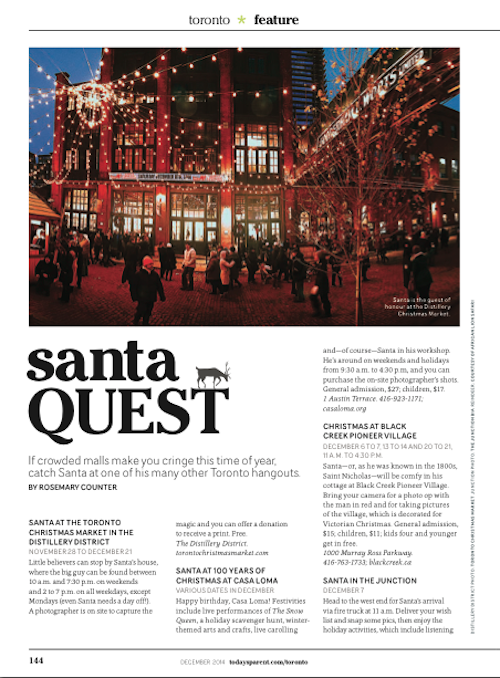 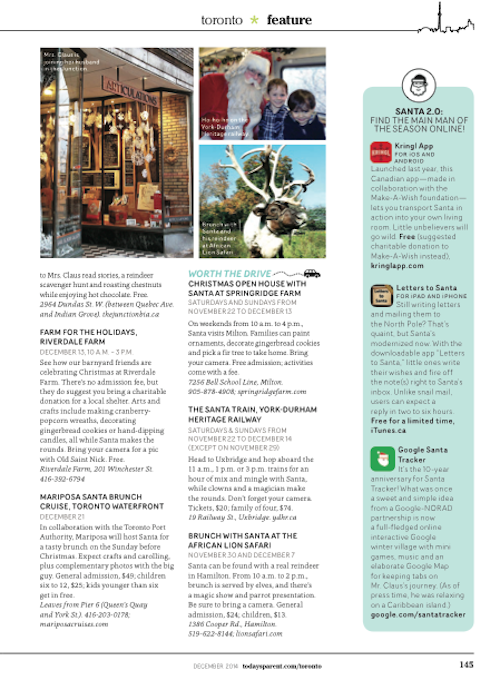