I’ve been hearing a lot about e-cigarettes. What are these things, and can they really help me kick my habit?

E-cigarettes are battery-powered devices that detect the user’s pull and vaporize a nicotine solution that recreates the smoking experience without carcinogens, odour, ashes, stubs, or even litter. Without the 4,000 chemicals added to a traditional burning cigarette, pure nicotine is a relatively harmless drug that’s often compared to caffeine.

Developed several years ago in China, the product didn’t sell much in Asia (a real pack of Chinese smokes costs a mere 40 cents) and was largely ignored in North America. But that all changed in March, when the luscious pout of Leonardo DiCaprio was photographed taking a drag off an e-cigarette. This was great news for Bill Marangos, president of SmokeStik International and maker of the actor’s e-smoke of choice. Before that moment, he says, “98 percent of people didn’t know about this product.”

But with this publicity, however, came some unwanted attention. Pressured by special interest groups, Health Canada—previously wary to even classify the product— cracked the whip in March with an advisory. Since they contain nicotine, SmokeStiks and all other e-cigarettes now require approval under the Food and Drugs Act, and so these products are currently off the market while they undergo Health Canada’s nearly year-long new drug review.

Without their fix, e-smokers are again jonesing for a working quit-aid. Marangos—a former three-pack-a-day smoker—claims SmokeStik’s success rate to be 10 times the measly 5 percent norm, though without any peer review studies available, it’s possible Marangos is just blowing smoke.

So e-cigarettes’ effectiveness as a quitting tool is currently debatable, says Jeff Daiter, chief medical director at Ontario Addiction Treatment Centres. But, he explains, “maybe it’s better than the patch or gum because you get the sensation.” He’s excited to incorporate a nicotine-free version of the device into his addiction research. “The deck is stacked against smokers,” he adds. “Anything we can do would be great.” 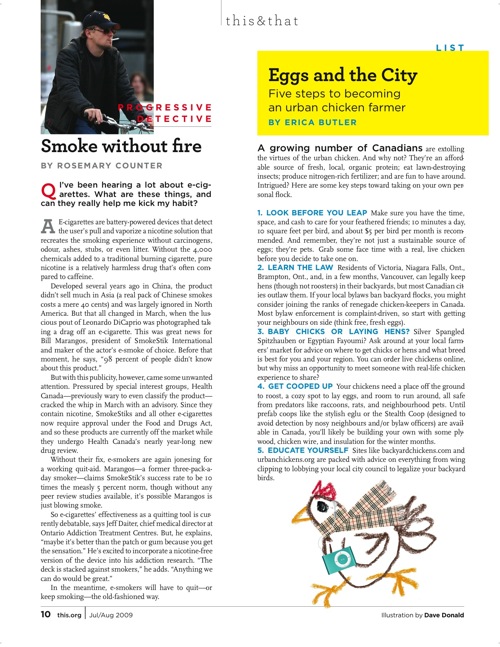