Around the world in 150 days

If all goes according to plan, history will be made in July when the Solar Impulse 2 touches down near Masdar City, a sustainable eco-city just outside the United Arab Emirates capital of Abu Dhabi. It will take off from the same place in March, in an attempt to complete the world’s first around-the-world, solar-powered flight. After a similar record-making circumnavigation of the globe in a hot air balloon, Swiss pilot Bertrand Piccard vowed his next voyage would use renewable energy. He teamed up with André Borschberg, an engineer and entrepreneur, and a crew that grew to 90 technicians, engineers and controllers, to create a fuel-free craft with potentially unlimited endurance.

After a dozen years of research and innovation, Solar Impulse 2 made its inaugural flight last June in Switzerland. “From the moment you take off, the more you fly, the more energy you get,” says Piccard of the revolutionary single-seater aircraft, currently being fine-tuned with final tests. The five-month, 35,000-km journey will be a global show of technology and invention, but also a message of positivity and possibility. “Our goal is to encourage human beings, society, politicians and corporations to be more energy efficient,” he says. “It’s a historical first and an adventure, but also a message about renewable energy and respect for the environment.”

A Home in Masdar City
In 2003, the Solar Impulse team partnered with Masdar City, a six-square kilometre arcology (architecture plus ecology) project. Currently in construction, phase 1 is expected to finish in 2015; the entire project, a self-sustainable and solar-powered hub for clean-tech companies, should be completed by 2025.“There’s a convergence of values between Masdar and Solar Impulse,” says Piccard. “Our common goal is to promote technological values and preserve the planet’s resources in a bid to encourage political leaders and organizations to adopt cleaner and more efficient technologies.” The Si2, which is being dismantled and loaded on a cargo plane, will arrive amid much fanfare during Abu Dhabi Sus- tainability Week, hosted by Masdar City in January.

Solar Impulse 2 Specs:
Though a prototype—now on display at a Paris museum—exists, Solar Impulse 2 (or “Si2”) is the only plane of its kind in the skies. The aircraft is made of carbon fibre, with four electric motors powered by 17,000 solar cells across a massive 72-m wingspan. “That’s bigger than a Boeing 747 jumbo jet, which is enormous, but with the weight of a minivan,” says Piccard. A large surface area for solar panels combined with an extremely light body allows the aircraft to stay airborne with minimal energy and maximum aerodynamic efficiency. It can go 140 km/hour and fly at an altitude of 27,000 feet.

The longest flight:
Solar Impulse 1 already holds the rec- ord for the longest manned solar-powered flight in history—26 hours across Europe, Africa and America in 2010—but theoretically the Si2 could fly day and night, without fuel, indefinitely. “The airplane has a potentially unlimited endurance and can stay in the air forever,” says Piccard. A human, however, is a different story. “The pilot can probably do about five days,” he says. While some legs (to Oman, India and China) clocked in at 24 hours, flying over the Atlantic and Pacific Ocean is expected to take five full days and nights.

How to fly a solar airplane
“A normal pilot would probably crash this plane,” says Piccard. Because the craft is so lightweight, turbulence has a far greater impact than in a conventional plane, as does inertia. “When you turn the airplane to the left, it takes a long time to turn left.” Piccard and Borschberg spent hours in a flight simulator before they tried the real thing, and even now, the risks are many. “Since it’s the first time anyone has attempted this, there’s no benchmark, nobody to copy, nothing that exists in the field. We’ve had to invent the technology, the strategy, the process—and basically, anything could go wrong.” The pilots have also been trained to cope with a lack of oxygen, to jump with a parachute, and to survive in the water.

Life in the cockpit
Between March and July, and with appearances and media ops in between, Piccard and Borschberg will take turns piloting the Solar Impulse. But 500 solo hours, in just 3.8 cubic metres, will be no easy task. “This isn’t just a scientific challenge—it’s a human one,” says Piccard. “There’s always something to be done with the airplane—maintain the right altitude, take advantage of the wind, steer the plane—so 20 minutes of rest is the maximum you can afford.” The seat reclines flat, much like a first-class pod on an airplane, and pilots will use yoga and self-hypnosis to stay agile and rejuvenated. And the bathroom? “You can’t take a shower, but there’s a toilet under the seat,” he says. “So you basically sit on the toilet the entire flight.”

The message
Many people are depressed and fearful of the future—of climate change, rising sea levels, pollution, depletion of natural resources—but when we only speak about problems, it gets really scary,” says Piccard. That’s why—like his father Jacques, who was the first man to reach the Mariana Trench, the ocean’s deepest point, in 1960; and his grandfather Auguste, who first piloted a balloon into the stratosphere—the third-generation explorer chooses to believe in positive change. “We speak instead of solutions. Today, we can save 50 per cent of the world’s energy using clean technologies. We can create jobs, make profits, build a better future and give hope to people,” he says. “That’s what I want this flight to do.” 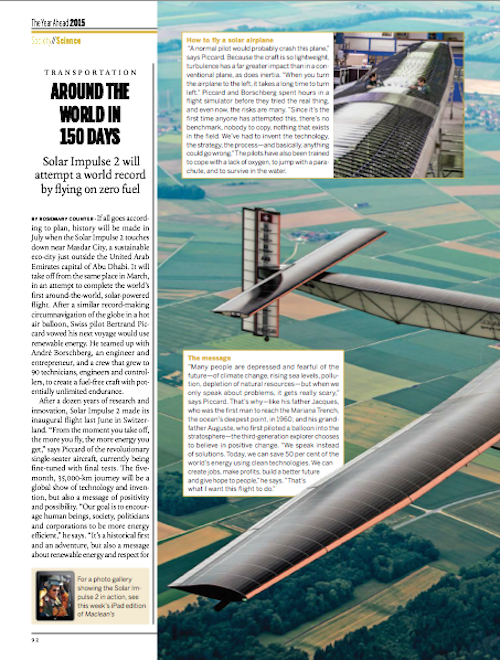