Check out one (or all) of these events – little sports fans will jump for joy.

Jr. Jays Saturdays, every Saturday home game
Most kids have seen a baseball game, but how many can say they’ve run the bases on a major-league field? Little sluggers are in luck at Jr. Jays Saturdays, held every Saturday home game of the season, where kids 14 and younger can round the bases post-game. One Jr. Jay is especially lucky – he or she will be selected to join the announcer to introduce batters for an inning. Kids’ activities free with ticket. toronto.bluejays.mlb.com

Toronto FC’s Canada Day Game, June 29
Looking for family fun this Canada Day weekend? Put on your brightest reds, get the kids in the car, and head to BMO Field at the Exhibition grounds for an afternoon match. Toronto FC hosts Real Salt Lake, starting at 1 p.m., as part of Canadian Heritage Day, in celebration of soccer and Canada’s first professional team. Tickets start at $27. torontofc.ca

The Queen’s Plate, July 7
Since its inauguration in 1860, with the Royal blessing of Queen Victoria herself, the Queen’s Plate thoroughbred horse race has been a hit, making it the longest running stakes race in North America. Kids can get up close as horses and their riders take their mark around noon at Woodbine Racetrack. Seat tickets range from $13 to $51; racetrack admission and parking are free.
woodbineentertainment.com/queensplate

2 Honda Indy Toronto, July 12 to 14
The province’s largest annual sporting event – held on and around Exhibition Place on 2.8 kilometres of specially built street track – cruises into Toronto in July. Kid-friendly features include Thunder Alley, a kid-zone of games, race-car simulators, and even Dr Pepper-cooler car races (race cars made with picnic coolers!). Doors open at 8 a.m. Tickets are $35 to $165. hondaindytoronto.com

Ontario Beach Volleyball Championships, July 27 to 28 & August 3 to 4
Bring the whole family out for an exciting day at the Ontario Beach Volleyball Championships at Toronto’s Ashbridges Bay. The season’s pinnacle event brings the province’s top teams – from 12 and younger to adult elite – to serve up the action while competing for gold. Free for spectators. ontariovolleyball.org

RAINY-DAY BONUS: Stanley’s Game Seven (3-D) Hockey Hall of Fame
Anyone pining for hockey season this summer should head to the Hockey Hall of Fame for the sport’s first 3-D film. Stanley’s Game Seven is an exclusive presentation of the quest for the cup, mixing live action and classic archival footage with computer-generated animation that literally jumps off the screen. The 22-minute film plays on the hour and at half-past in the new TSN Theatre, and is already included in your admission. hhof.com 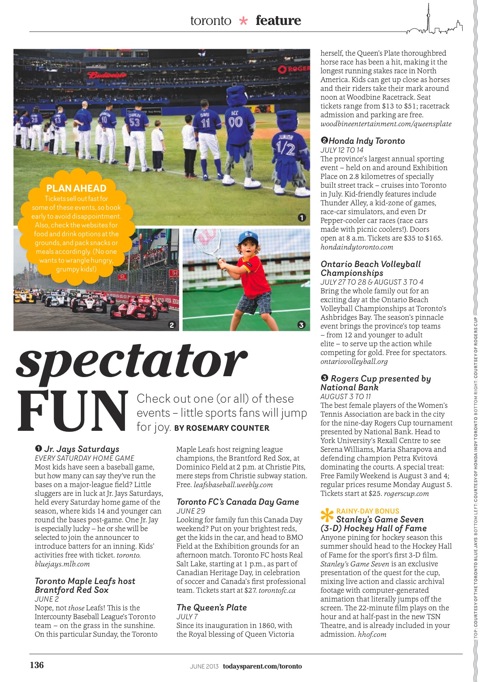