Shunned by her community for breaking their moral code, one woman searches for happiness by embracing a new, modern life

It’s a sweltering day in Toronto, and Margaux Sullivan is on her way home from the office. As she passes her local pub, friends inside smile, wave and call her name.

The response reminds Margaux of her old life. “Everyone knew me. People loved me,” she gushes later as she uncorks a bottle of red wine at home. Her fridge is crowded with photos of smiling friends, but for a long time Margaux had no friends at all. She kicks off her work heels and changes from her business suit into a blue sundress. A half-dozen dry pink roses slump in a vase.

Margaux is single and 30-ish. (“I turn 27 every year,” she giggles.) She now lives a modern urban life of going to movies, bars and doing yoga, but just a few years ago, everything was different. She digs out a photo album to show me: her perfect wedding, a traditional ceremony held in the luscious garden of a posh estate, four smiling bridesmaids at her side. At 25, Margaux was a newlywed and a member of the close-knit Jehovah’s Witness community. Numbering more than 100,000 in Canada, Jehovah’s Witnesses are evangelical Christians best known to most of us for their modest dress and door-to-door preaching, which Margaux performed dutifully since childhood. “Most people tell you to get lost and slam a door in your face,” she says.

For those of us who didn’t listen, here are the basics: Jehovah’s Witnesses accept the Bible as scientifically and historically accurate. Christmas, birthdays and other holidays are not celebrated. According to their beliefs, the bible prohibits homosexual conduct, abortion is murder, and all sexual relations outside of marriage are forbidden. In the JW community, unrepentant sin is grounds for “disfellowshipping,” or shunning, and it is believed that anyone who is shunned or who isn’t a Jehovah’s Witness will perish in Armageddon and not receive everlasting life in a restored earthly paradise.

“I accepted what I was told at face value,” says Margaux, who was raised in the religion since age three, when her mother left her Catholic father. In the Jehovah’s Witness community in PEI where she grew up, there were guidelines, from what to watch on television and what to read (there could be no swearing or violence) to what to wear (there could be no short skirts, and dress clothes were required when canvassing door-to-door on weekends). Also, higher education was strongly discouraged.

Margaux’s first and only serious boyfriend, also a Jehovah’s Witness, became her husband when she was 25. Soon after their marriage, he was appointed an “elder.” Elders represent and speak for God, and are revered accordingly. Margaux and her husband relocated to Toronto, where they were considered ambitious up-and-comers within the JW community. They were groomed to be missionaries, which meant travelling to various Toronto congregations to speak in front of hundreds.

They weren’t compensated with money, but with promises. “Elders will be princes in the ‘new system,’” she explains, referring to the nearing post-apocalyptic world. Her task, in the meantime, was to set a regal example. “I had to be perfect all the time, but there were always a million ways to be a bit better. With the Witnesses, the more you sacrifice, the more esteem they have for you.”

Back in this world, sacrifice wasn’t so glamorous. “We lived in a tiny apartment, drove a crappy car. I was working four days a week, doing 20 hours of volunteering, being a mentor and example for all these people and, on top of all that, being a perfect housewife,” says Margaux. It left her exhausted and starved for acceptance.

Five years into her marriage, Margaux met a man at work who was not a Jehovah’s Witness. Let’s call him Eric. She and Eric were friends for two years. Her husband jokingly referred to Eric as her boyfriend, but one day Margaux realized she was actually in love—and that the feeling was mutual. “He loved me just the way I was; I didn’t have to work harder or be better,” she says, holding back tears. Her sadness and relief, even now, is palpable.

Eric, like Margaux, was married. In many ways, their affair was conventional: he said he loved her, and he promised to leave his wife, but he never did. In other ways, it wasn’t traditional at all, in that Margaux and Eric never had sex. Their affair consisted of dates and kissing, punctuated by a series of text messages: “I love you,” “I want to be with you.” Eventually, these texts were discovered by her husband, who then showed them to four elders as proof of her infidelity.

Days later, Margaux was called to a meeting by the elders (all close friends of her husband) to face a charge of “porneia,” a vague Greek term for “sexual immorality.” For hours, they probed her for intimate details. Margaux, of course, needn’t have confessed, but keeping silent would would have been unthinkable. “Lying to elders is a bigger sin, and it would mean a certain death come Armageddon.”

Within two weeks, Margaux was disfellowshipped—shunned by the people who once revered her—for breaking the Bible’s moral code. Her mother and sister ceased all communication. Her husband kicked her out of their home but did not have to shun her. (They continued to speak until their divorce was finalized. He remarried within one year.) Her best friend since childhood, one of the bridesmaids in her wedding photo, looked away whenever they passed in the street. Margaux was deemed a “bad association”—someone who’d lure others in the same direction—and was mourned as if dead. She remembers the day the announcement was made: “I saw people balling their eyes out. It was like I had terminal cancer, except that would have been way better.”

Disfellowship, as it turned out, wasn’t so different from death. “I had no home, no job, no money, no friends, no husband,” she says. Eric was no longer in her life. Her mother and sister inquired after her through non-Witness friends, but they didn’t check in on her even once. Now suffering from panic attacks, which she still has almost daily, Margaux turned to her former best friend’s husband, an elder. “I’m scared I’m going to hurt myself,” she wrote to him. “I don’t know where to go for help.” His curt response: “There is no help for the disfellowshipped.”

“They think if you’re all alone, if you have no family or friends, then you’ll come back,” she says. It worked. Twice a week for a whole year, Margaux continued to attend Kingdom Hall meetings, begging for forgiveness and hoping her disfellowship would be overturned. She’d sit in the back, her presence unacknowledged by her former friends. Margaux eventually appeared before a judicial committee and repented her sins.

A year later, she was finally reinstated and permitted to be a part of the congregation again. But “everything they were talking about—love, compassion, forgiveness—felt so hypocritical.” Because, in the meantime, life had changed: Margaux saw movies, went to restaurants alone and took up yoga, a practice frowned upon by the JWs. She took university courses, got a job and an apartment. She made her first new friend, a lesbian whom the old Margaux couldn’t have even associated with in her old life.

She also started a blog to make sense of what had happened. “I ran into a friend from a past life yesterday,” she wrote in a post around Thanksgiving. “She still lives the way I used to, being told how to think, what to say, whom to be friends with, whom she can love.” Now Margaux chooses to celebrate the holiday. “The thing I am most grateful for is freedom.”

Today, Margaux has made a choice. She doesn’t believe in God and never attends Kingdom Hall, but, technically, she is still a Jehovah’s Witness. It’s the only way she can continue to see her family, who have made choices of their own: Her mother and sister, even after Margaux’s reinstatement, have minimal contact with her. “We go in spurts,” she says. “My mom says I’m ruining her health because she’s so worried about me, and that I’ll soon die in Armageddon if I don’t come back to Jehovah.”

More than anything, Margaux wants a normal relationship with her mother. “A while ago, my new friend’s mom dropped dead suddenly at 53,” she says. After attending the funeral, Margaux reached out once again. “I sent my mom an email saying that the same thing could happen to either of us, and is this the way she wants things to end?”

Her mother didn’t respond, but a few days later she dropped by Margaux’s office. At the front desk, without calling upstairs, she left six pink roses and a sympathy card. “I’m sorry for your loss,” it read. 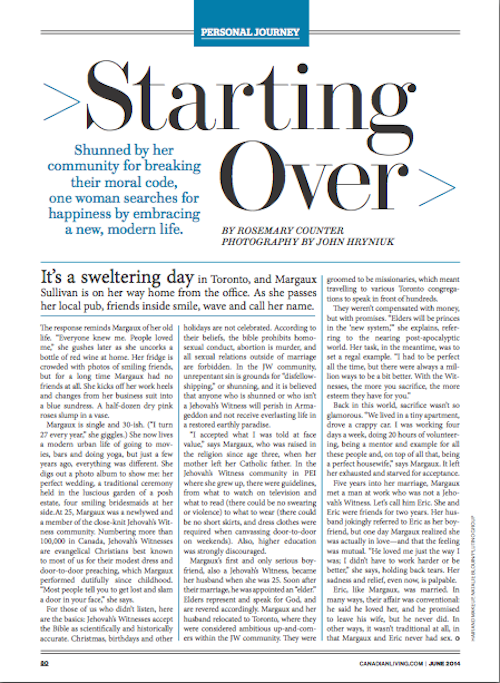 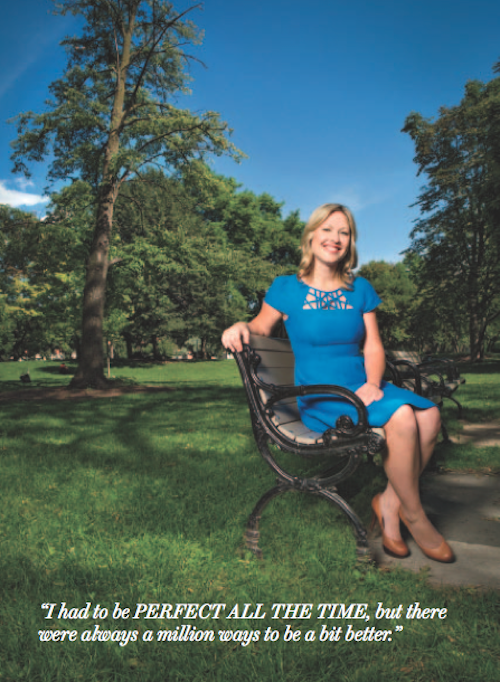 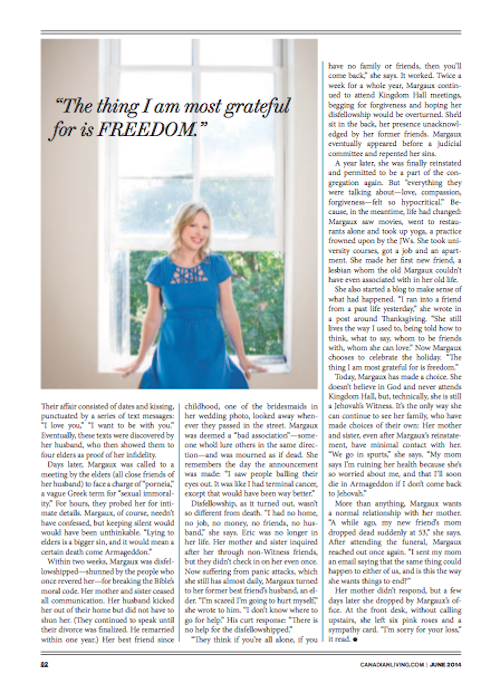