Cultural lessons from the year almost past

B is for Breakups: From Bennifer 2.0 to Miss Piggy and Kermit

The Year of Celebrity Single began slowly, unexpectedly, with January’s sad news that even McDreamy can’t make it work: Patrick Dempsey and Jillian Fisk were “after careful consideration and mutual respect” splitting after 15 years.

For the nosy and celeb-obsessed among us — since I still haven’t recovered from Amy Poehler’s divorce three years ago, I count myself among you — it wasn’t a regular celebrity breakup. Patrick and Jillian Dempsey met before they were famous, in a hair salon, and had three kids they kept out of the spotlight. They loved despite Hollywood, not because of it. Love was dead, and it was devastating.

And it was only the beginning. The Dempsey/Fisk split foreshadowed what was to come, a year of breakups, with the summer dealing the knock out punch.

Among the celebs to visit Splittsville between May and September: Ben Affleck and Jennifer Garner (11 years), Kourtney Kardashian and Scott Disick (nine years; 63 in reality TV time), Gwen Stefani and Gavin Rossdale (13 years) and Jon Hamm and Jennifer Westfeldt, who threw in their towel after 18 years on Labour Day. Even Miss Piggy and Kermit the frog, after 40 good years together, hopped aboard the breakup bandwagon.

Then there were others that weren’t quite worth mourning: Avril Lavigne and Chad Kroeger; Big Bang Theory actress Kaley Cuoco, forced to cover her unfortunate wedding tattoo with an even more unfortunate oversized moth, and Charlize Theron, who finally came to her senses about Sean Penn. Good for you, girl!

By the end of Breakup Summer, Us Weekly had charted a timeline of 24 famous separations. The New York Times weighed in in September asking, “Why Did So Many Famous Couples Break Up This Summer?” That piece postulated that celebrity breakups weren’t contagious, just strategic. Publicists save news of splits for slow summer months, when most people follow their favourite celebs a less little closely. This year, there just happened to be two-dozen of them.

So despite how it feels, you won’t catch a breakup this season. Nor is love dead. In fact, McDreamy and his ex were spotted together in Paris. Perhaps next year will bring the Season of Reconciliation.

G is for Genderfluid: People stopped being quite so hung up gender binaries

Remember when men were men and women were women (and waiting with his after-work whisky by the door)? Me either, and maybe there never was such a time, but long-blurring gender lines were completely washed away in 2015. The word is “gender-fluid” and while it’s been floating around since the mid ’90s, popping up on Urban Dictionary in 2007 and sparking an online community in 2010. But it’s right now that gender-fluid moved into the mainstream lexicon and was added to dictionary.com.

“Gender-fluid,” they write, is “relating to a person whose gender identity or gender expression is not fixed and shifts over time or depending on the situation.” Urban Dictionary makes it cooler as a “dynamic mix of boy and girl.” Genderdiversity.com explains “a person may feel they are more female on some days and more male on others, or possibly feel that neither term describes them accurately.”

It has been a big year—maybe the biggest ever—for trans people and trans visibility. When Caitlyn Jenner revealed herself as a trans woman, appearing on 20/20 interview with Diane Sawyer and on the cover of Vanity Fair, she flipped any remaining easy understandings of gender upside down. When a strong, fast, Olympic-medal-winning American hero of a man becomes the most famous trans face on the planet, the zeitgeist changes.

Perhaps because they now had permission to do so, or maybe because gender was so publicly revealed as fickle anyhow, celebrities everywhere began coming out as neither particularly male nor female. “I wake up every day sort of gender neutral,” said Orange Is the New Black actress (and universal girl-crush inspirer) Ruby Rose in January. “I don’t relate to being boy or girl, and I don’t have to have my partner relate to boy or girl,” said Miley Cyrus in May. By the end of the Summer, Kristen Stewart addressed rumours of her girlfriend with a characteristic “meh”: “I think in three or four years, there are going to be a whole lot more people who don’t think it’s necessary to figure out if you’re gay or straight,” Stewart told Nylon. “It’s like, just do your thing.”

Also enjoying the middle of the gender spectrum is supermodel Cara Delevingne, Johnny Depp’s wife Amber Heard and daughter Lily-Rose, and Raven-Symoné, who identifies as “a human who loves humans.” Many of these challengers of the status quo got together for the artist iO Tillett Wright’s “Self Evident Truths” photography project, showcasing 10,000 American faces who identify as “not 100 percent straight.” The project plans to park on the lawn of the White House sometime before the 2016 election for a message that can’t be missed: Open-minded, label-less, gender-fluid people are coming out of the closet and into a welcoming community that might represent the future of human sexuality.

R is for Reboot: Reboot fever spread to the small screen

Everything old is new again, they say, a sentiment especially true in Tinseltown. Jurassic Park, Terminator and Star Wars (Episode 87?) all landed this year in theatres, again. But when it comes to revisiting material for old times’ sake, it’s the small screen that’s really recycling.

Most of the time, reboots are nostalgic fantasies that may or may not pan out: Among the rumours are a Married with Children spin-off starring Bud (a.k.a. Grandmaster B), the return of Lucy Lawless in Xena, or maybe even the whole (now stupidly famous) gang from Freaks and Geeks. Too often, these shows are disasters we push to forgotten corners of our minds (remember Joey?). More often, they are merely disappointments that cannot live up to the love and lore that precedes them. And yet still, we want more.

This year brought news that yesterday is back again: In March, executive producer Chris Carter confirmed the return of The X-Files, with both Mulder and Scully on board. The next blast from the past was short-lived cult classic Twin Peaks, starring Kyle MacLachlan in the reprised role of Special Agent Dale Cooper and maybe Sheryl Lee as the maybe-still-alive Laura Palmer (fittingly, the plot’s cloaked in mystery). Then there’s the return of Full House, now Fuller House, as announced by Uncle Jesse himself in August. The familiar premise: pregnant and widowed D.J raises three boys with the help of sister Stephanie (“how rude!”) and wacky BFF Kimmy Gibbler. If all goes according to plan, which it almost certainly will not, all are expected on your Netflix binge-watch list next year.

Only time will tell if these much-anticipated reboots can deliver, or if it’s even possible to re-capture a show so well-loved to begin with, which so far no reboot has managed. If there’s one that just might, however, my vote’s on The Gilmore Girls, which announced in October that it too would be back very soon. Hardcore fans of the WB show rejoiced for the closure that they didn’t get the first time around — like a hundred shows before it, low ratings and contract disputes brought an abrupt and unsatisfying end to the series via the dreaded kiss of death called cancellation.

But in the eight years since Gilmore Girls says goodbye, the television landscape has shifted in Rory and Lorelai’s favour. Throwback TV brings a low-risk premise and captive audience — a very tempting, albeit lazy, option for networks looking for “new” content in 2016. Maybe that’ll be the year of reboots and now’s the year of reboot anticipation; because there’s another thing they say a lot: Don’t mess with a good thing.

W is for Wage Gap: Jennifer Lawrence led the charge for pay equity in the Hollywood

It may the only silver lining of the Sony email hack, but the nasty data dump revealed all the dirty money details we’ve long suspected about women in Hollywood: just like the rest of us, they’re paid less than men doing the same job. The face of the issue was Jennifer Lawrence, who (very publicly) learned she banked millions less than her male American Hustle co-stars — just as she pocketed an Oscar for the film.

The double standard was so obvious and undeniable that suddenly talking about money — usually considered rude and especially when women do it — became unavoidable. At February’s Academy Awards, Patricia Arquette used her acceptance speech to demand equal pay for women, to an on-their-feet audience of supporters. Jennifer Lopez and Meryl Streep can be seen cheering in the crowd.

With Pandora’s Box wide open, other women in Hollywood talked openly about the sexist pay gap. Sandra Bullock, Rooney Mara, Amanda Seyfried and Sienna Miller all told inside stories of an industry that paid them a fraction of their male co-stars. Toni Collette was as wonderfully blunt as only Toni Collette can be: “It’s a f–king sexist industry,” she said. “I don’t understand why genitalia makes a difference.”

In November, 63 of these outspoken women (whether actresses, directors or filmmakers) came together on the cover of The New York Times Magazine for Maureen Dowd’s “The Women of Hollywood Speak Out.” Among them were Anjelica Huston, Rose McGowen, Shonda Rhimes and Geena Davis — a power squad of women demanding the respect (and paycheques) of men who do the same job. If anyone can finally close the pay gap in Hollywood, it’s these ladies. 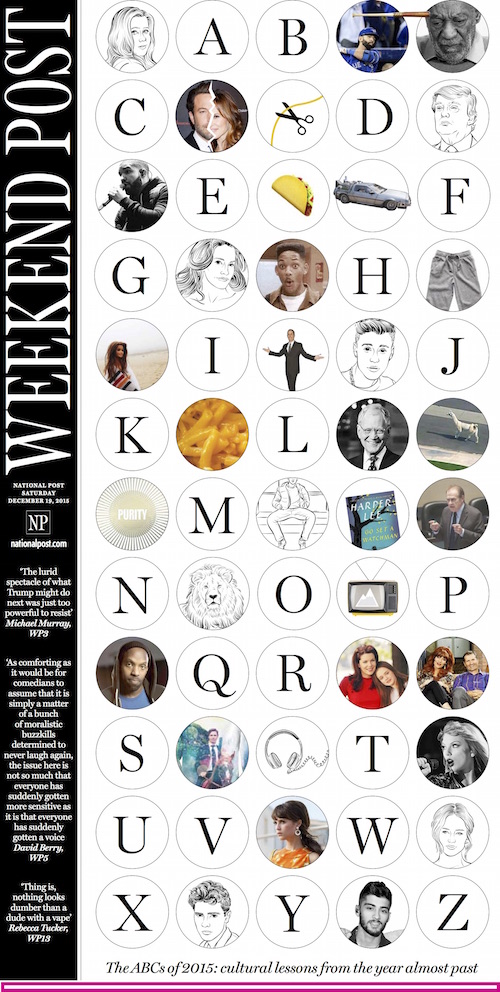 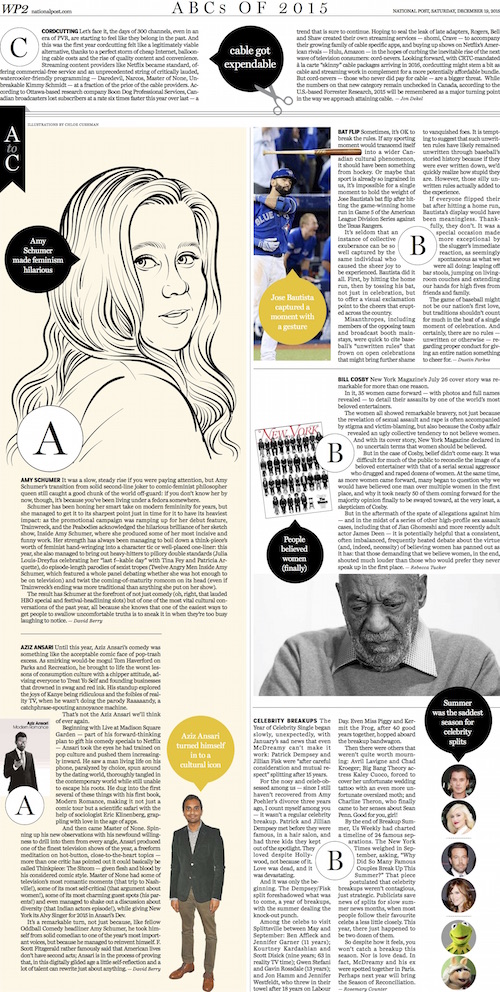 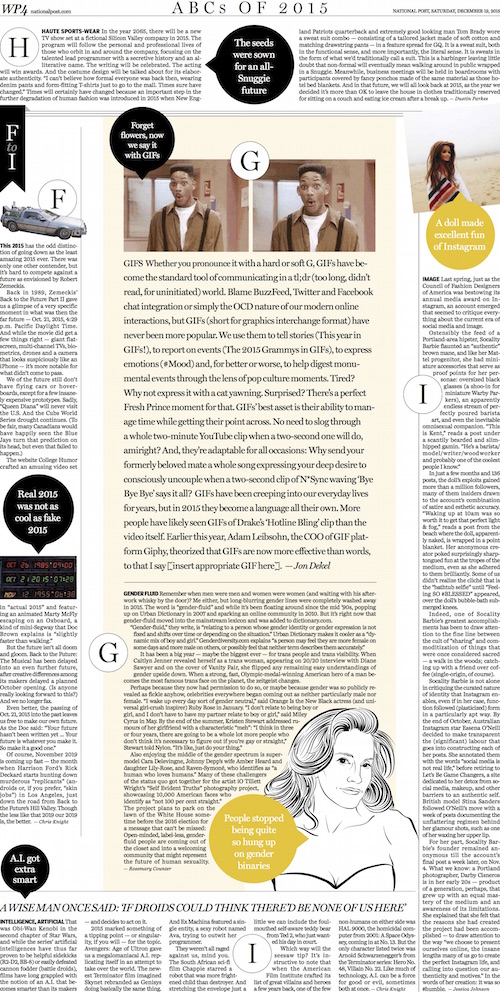 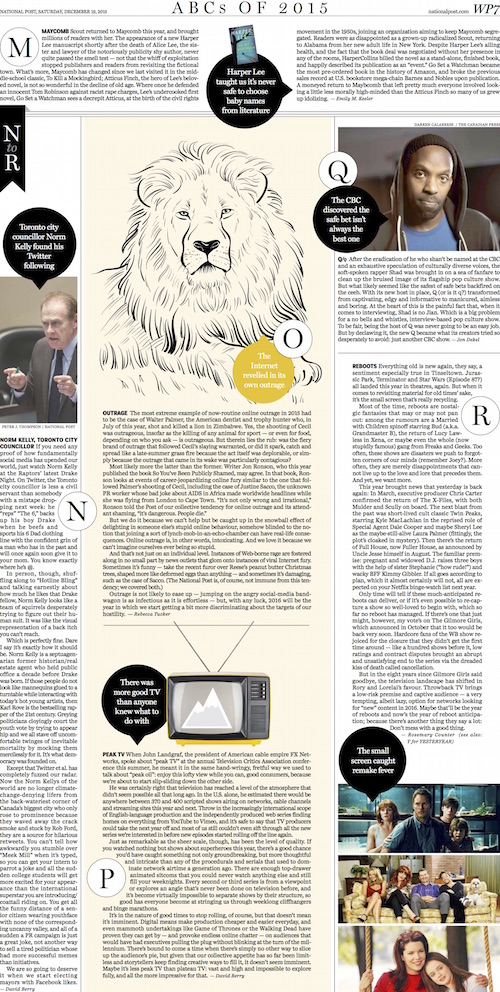 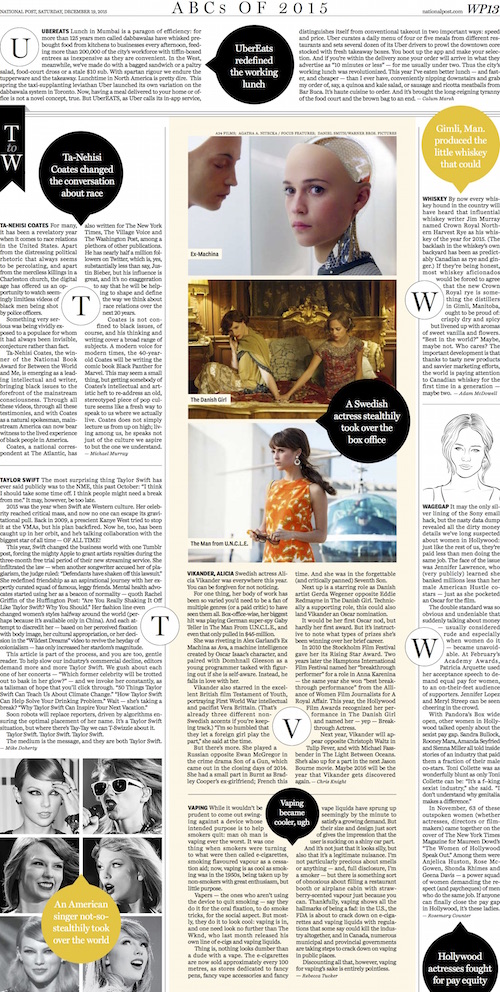