I don’t have kids of my own just yet, but I am a volunteer Big Sister to a spunky nine-year-old. Like me, she’s got a hearty appetite and no tendencies toward picky eating. (I once dared her to eat octopus; she totally did.) So, we went in search of a brunch spot that worked for both of us—sophisticated and stylish for me, tasty and welcoming for her—and settled on The Ace in Roncesvalles.

While this reinvention of the local fixture opened in November 2011, The Ace still feels like it’s been around forever—and it kind of has. For 35 years, the space was curtained up beneath an old sign that read “Ace Restaurant: Fine Chinese and Canadian Food.” Then one day a “For Rent” sign appeared and Greg Boggs, a neighbourhood dad of two, jumped at the opportunity.

Inside, Boggs found an old diner with all the trimmings: original wood booths, ornate wallpaper, even a vintage ice cream fountain (that he converted to a working beer fridge). “We tried to keep things exactly the way they were,” he says, though he did scrape lots of chewing gum from the undersides of tables. How loyal was he to the original? “There are still people who come in, recognize the interior and say they used to hang out here as kids. Probably smoking and chewing gum mostly,” he laughs.

The decor may be retro (“A moose should live here,” said my little friend), but the food is modern and always evolving. The dinner menu boasts an entire kid’s section—including Mac ‘n’ Cheese ($7), Spaghetti with Parmesan ($7) and the Little Ace Burger ($8)—but brunch has some kid-friendly feasts, too. “More than anything, we wanted to make a community place, which of course includes children,” says Boggs.

I ordered the Breakfast Burrito with Chorizo and Black Beans ($12), served with a side of Crispy Hash Browns. It was definitely tasty, but next time I’ll be more adventurous, like my date, who went all-out with the Grilled Nutella Sandwich on thick challah toast ($10), dusted with icing sugar to boot. She revelled in the goopy experience, though she hasn’t quite grown into the raspberry- compote dip just yet. “I’d rather dip it in more Nutella,” she said. I understand.

And though we’d probably had enough sugar already, I thought it would be downright unprofessional to write a restaurant review without trying the dessert. It’s ice cream heaven at The Ace, with six to 10 homemade variet- ies on rotation, so I chose a very mature tart blueberry sorbet while she tried the yummy peanut butter ($4 each). We shared but agreed in the end that hers was better. As a result, I vow to order like a nine-year-old more often.

MAC ’N’ ChEESE with Cauliflower Florets ($7):
In The Ace’s newly renovated kitchen, the goal is “simple food, well executed,” says chef Peter McKnight. It’s no surprise then that the mac ’n’ cheese holds an important spot on the menu. McKnight uses traditional elbow macaroni pasta in béchamel sauce, then adds aged cheddar and Ontario cheese curds (for extra kid-pleasing “stretchy effect”). He then sneaks in some healthy blanched cauliflower to please parents. It’s not at all unusual for late-night patrons to ask for the kids’ mac ’n’ cheese, adult sized. 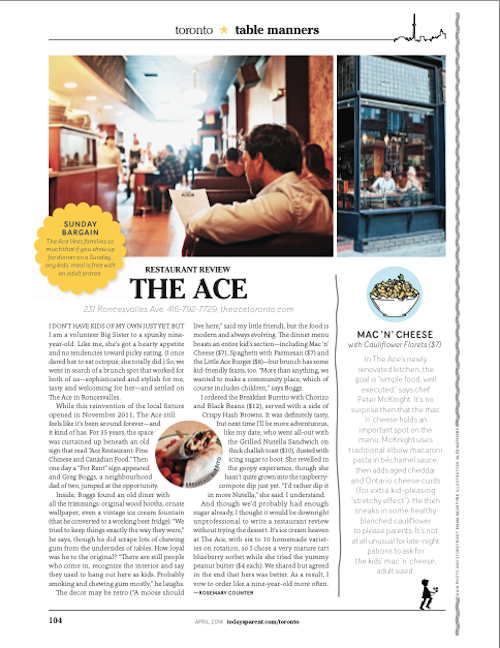