The Beach Boys have a senior moment

Depending on your point of view, the Beach Boys are either back again or they never left. For five decades, splintered versions of “America’s band” have been touring under the Beach Boy name, but it’s the new incarnation that’s selling out arenas: Brian Wilson, Mike Love, Al Jardine, Bruce Johnston and David Marks, who was 14 the last time he was part of the band in 1963.

Like many fans, Canadian music journalist Mark Dillon fell for the early melodies. “I gravitated to the fun-in-the-sun songs,” he says. Dillon attended his first concert in 1979 when the Beach Boys played the Montreal Forum. He was 10.

“I remember Brian being off to the side, living in his own world,” says Dillon, who grew up in Montreal and lives in Toronto. Even the squeaky-clean Beach Boys have some dark stories, and Dillon’s been dreaming of telling them for two decades.

For his book marking half a century since the band formed, Fifty Sides of The Beach Boys, Dillon spoke to 50 people—everyone from Mike Love to drummer Hal Blaine to Alice Cooper—on how the songs came to be. None are as simple or innocent as they seem.

Originally called the Pendletones, a pun on Pendleton shirts popular at the time, the band discovered Capitol Records had renamed them when they unpacked their first box of singles. At the time, B names (Bobby Darin, the Beatles) were seen as non-threatening.

“The new name put them on the map, but it became a millstone around their necks,” says Dillon. “They even later considered being just ‘Beach’ because they didn’t want to be boys anymore.”

But since image is everything, they had to be posers. “Brian always hated surfing; he was terrified of it,” says Dillon. Despite Surfin’ U.S.A., Surfin’ Safari and Surfer Girl, “they didn’t really participate in the culture they sang about. Everyone accepts they ain’t the real surfin’ deal,” he laughs.

Good Vibrations—under the working title Oh Yeah!—was inspired by Wilson’s mother’s explanation of why dogs bark at some children but not others. Wouldn’t It Be Nice isn’t as nice as it seems; Wilson’s narrator is lusting after his teenaged girlfriend’s older sister. God Only Knows, which some interpret as a suicide letter, got its title from Time magazine’s infamous “Is God dead?” cover, which landed on newsstands as Tony Asher finished the lyrics.

“By the early ’70s, you can see them looking around more, talking about ecology, the Kent State riots and welfare,” says Dillon. But many didn’t buy it. “The manager was trying to push them into a more relevant position for a hippie audience.”

Wilson admitted he was “envious as hell” of the Beatles, who hogged both audiences and Capitol Records resources. The Beach Boys even hooked up with Indian guru Maharishi Yogi, by then old news to the Beatles, for a tour that closed after four shows. Other PR disasters include a friendship between Charles Manson and Dennis Wilson, who gave the Manson family $100,000 for gonorrhea treatment. The Beach Boys also recorded a song written by Manson. “Talk about bad publicity,” says Dillon.

This made the Beach Boys uncool, Dillon says, recalling there was a time he was embarrassed to admit he was a fan. That had changed by the time he met Brian Wilson backstage at a concert in Milwaukee in 2009. “I found him as quirky as one would expect, but also very upbeat and friendly,” Dillon recalls. The next year, he got a phone interview when Brian Wilson Reimagines Gershwin was released. “He’s a notoriously challenging interview and very shy by nature,” says Dillon, who wrote a story out of that conversation for Maclean’s. “Interviews are not his favourite thing, but he dutifully does them. He’s very shy by nature.”

The Beach Boys weren’t ever cool enough to be trendy, but they are trending now. Songs are popping up on TV shows like Big Love and Mad Men, and a biopic of drummer Dennis Wilson is set to hit theatres next year. “On the one hand, they’re not the Rolling Stones and never will be,” says Dillon. “But on the other hand, if you dig deep enough, there’s lots of sex, drugs and rock ’n’ roll in this story too.” 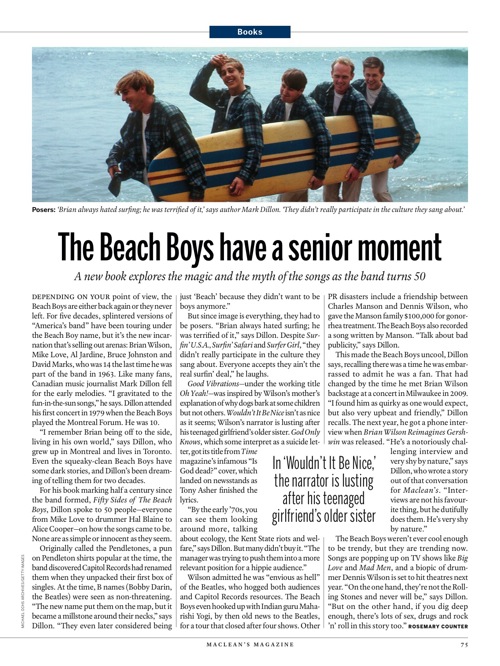