The most intimate of Ubers

A stranger comes to your home to give you a massage. What could go wrong?

For 18 years, Parisa Carello has been as a massage therapist in Toronto. She spent years working at a spa, which isn’t as glamorous as it seems: “You’re in a little dark room all day, where people come to you but you never leave,” says the 43-year-old. She operated her own clinic once, which brought too much administrative work, so in recent years her main practice has been mobile calls (that is, at-home massages) secured via word-of-mouth. Then she found Soothe.

Called “Uber for massages,” the L.A.-based app works just as it sounds: Users in 49 cities electronically book a massage therapist to appear on their doorstep in as little as an hour. Users can choose their therapists’gender and specify their choice of 60, 90 or 120 minutes of Swedish, deep tissue, sports or pre-natal massage. A fixed fee ($100-$229) is charged to their credit card, so no cash is exchanged. For quality control, clients rate the massage and therapists rate the client. Following a successful expansion into Vancouver last year, Soothe is currently rolling into Toronto.

“I was intrigued because they take care of all the concerns a therapist would have: safety, money, advertising,” says Carello. She specifies her availability (a perk for a mom of twins) and accepts clients as she sees fit. She plans on 10 to 15 massages a week and banks $90 an hour—three times what she’d make at a spa.

“Massage therapists have always been doing at-home massages,” says Merlin Kauffman, Soothe’s founder and CEO. The Harvard business grad grew up getting regular rubs, but found them increasingly difficult to come by when he travelled for work. “The hotel spa is always booked, I don’t know the quality of a massage if I just show up at a spa, and if you’re travelling on odd hours, they’re often closed anyway.” Between 8 a.m. and midnight, Soothe will send a licensed, vetted, and registered massage therapist (RMT) to your home, office or hotel. Kauffman’s biggest challenge is convincing clients to open their door.

Take Lannette New, an admin assistant who works from home in Vancouver. A friend in L.A. suggested Soothe. “I’m not usually one to indulge, but I will if they come to me,” she says. New enjoys skipping the booking, transport and changing time at a spa, and doesn’t miss the spa ambiance. “You pay a premium for a robe and some cucumber water,” she says. “I have that here!”

That said, New was hesitant at first. “I was kind of worried, of course, because it’s still a stranger in your house.” Though her experience has been nothing but positive, she will never consider a male practitioner. “Not if I’m home alone, no way,” she says. “But maybe that’s just me.”

It’s not. Soothe’s potential to go very, very wrong is on many people’s minds. Uber, the car-hire service, is plagued by mounting accusations of assaults, attacks and even deaths—and its business model doesn’t even involve nudity. All of Soothe’s RMTs must pass a police check, and all clients are made accountable via their address and credit card, but a safety breach is still of upmost concern. “We check in with a concierge right as we arrive and check out as soon as we leave,” says Carello. If she forgets, the Soothe team will attempt to contact her and then the client. If neither is available, they’ll call the police.

It’s a scary thought, admittedly, but it’s a risk many consumers are willing to take. “On-demand services are expanding in all directions, including into personal space,” says University of British Columbia marketing prof Kate White, who specializes in consumer behaviour. She cites services that will come over to blow-dry your hair or paint your nails, but she “can’t think of an on-demand service more intimate than this.” That said, she adds, consumers said the same thing about Uber. “Some weird dude will come to my house to give me a ride? That was odd once too,” says White.

Consumers are slowly warming up to more intimate services: Uber Maids brings a house-keeper into your home and UrbanSitter will send a babysitter. Others proved logistical nightmares, like on-demand laundry apps Washio and Prim, both now defunct. Soothe could go either way, but Kauffman’s banking on both massage therapists and clients embracing the at-home model: “A massage is inherently a better service to be had at home.” 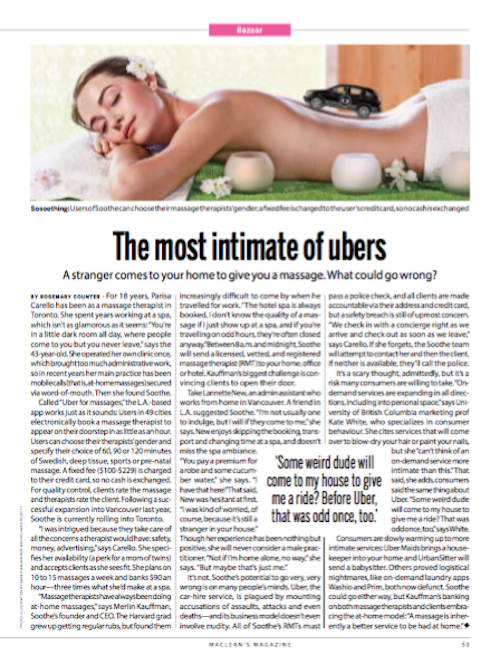