The Race to Build the Perfect Couples’ Sex Toy

Should Jessie’s and James’s 3-D forms fit, the product will move to prototype, then to a team of 50 women experts—including gynecologists, pelvic-floor physiotherapists, and sexologists—for testing and feedback before We-Vibe designers make final tweaks and move into production. Since 2008, when the original We-Vibe was invented by a Canadian engineer and his wife, We-Vibe has sold nearly 4 million units globally, according to We-Vibe ambassador Tristan Weedmark. “That is a lot,” says Weedmark, “especially for this industry that doesn’t often sell in volume.”

In the 16 years since, the S.A.T.C. generation grew up. Many moved into committed relationships with similarly open-minded men, and they brought their toys with them. The result is an unforeseen market shift in base demographics. According to the Swedish “intimate lifestyle company” Lelo, 70 percent of their customers are in committed relationships. Married women are actually more likely to own vibrators than their single counterparts. At the same time, products are increasingly sleek, chic, and safe; they’re made now of medical-grade silicone, they charge wirelessly and sync to your iPhone. Timing and technology has made the market for a couples’ vibrator ripe to explode, and, for the right product in the right time and place, sales will be lucrative.

If they’re lucky, the We-Vibe could be that product. “We haven’t had our Rabbit moment, yet, but we do have a cult-like following growing,” says Weedmark. Ample feedback from consumers makes some grand, “saved my marriage!” claims, including one heartwarming story from an elderly couple: “He said it was the first time, after 65 years of marriage, that he watched his wife orgasm,” she writes.

Moreover, unlike some newer competitive toys popping up in the market, We-Vibe believes they’ve earned it. “We created the couples’-vibrator category,” says Weedmark. “We faced a lot of challenges when introducing a product that no one had seen before and wasn’t entirely intuitive. The early reaction was, ‘You want me to put what where when I’m doing what?’”

The short answer is they want women to insert the toy and wear it during intercourse, making penetration and vibrational clitoral stimulation simultaneous. Here’s how it works: the silicone We-Vibe is a C-shaped, hands-free, double-motor toy worn by the woman during intercourse. The innovative design features one internal arm inserted into the woman that fits up against the G-spot; another external arm curves along her body to the clitoris. Each arm has its own vibrating motor, and the whole thing’s operated via cordless remote.

A “worn” product must be hands-free and is probably activated via remote, so nobody need reach between bodies to switch modes. This may require Bluetooth connectivity, since said bodies can block or weaken a signal. The toy must also stay put during intercourse, which it must simultaneously accommodate, space-wise. It must fit two bodies instead of just one and, on top of all that, provide pleasure to both parties. This is no easy task, though many are trying just the same.

“Men just haven’t been socialized to be good sex-toy consumers,” says Dr. Kat Van Kirk, a Los Angeles-based sexologist. Gay men often use toys, creating a connotation that some straight guys don’t like, says Van Kirk, but a (non-phallic, equal-pleasure) couples’ version might let those men feel permission to feel the good vibrations. “Some men actually prefer the idea [of a couples’ vibrator] just because of the way it’s designed,” she says, and once they try it, “they learn that men can get pleasure from sex toys, too.” Her own line of couples’ toys is currently in development, with plans to launch this Christmas.

If there’s anything these players in the couples’-vibrator race can agree on, it’s that old taboos are dying and customers are ready for whatever comes next. “People know sexual health is as important as their physical and mental health,” says Weedmark. And, says Lieberman, they’re “ready to admit they want more and they want options.” Which, if any, of these products might win mainstream success and how—a well-timed TV spot, an endorsement from Brangelina—remains to be seen, but in the meantime, head to your local CVS. In May, with little fanfare but big potential, the We-Vibe secured its spot on pharmacy shelves. 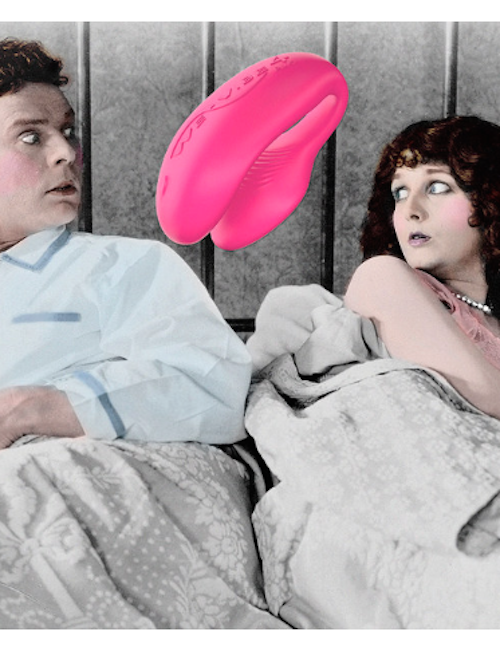