The Return to Cubicles

Companies leapt at the promise of the open-concept office trend. Workers, it turns out, are not happy

Not all offices can be like Shopify, Facebook or Google, but ever since these massive tech success stories embraced open plans—a mid-century model that circled back into vogue—copycat companies have followed suit. Studies were few, but open offices nonetheless promised to foster better relationships, break down hierarchies and promote collaboration. A 2008 study reported office workers were fitter and less stressed. It’s no wonder two-thirds of companies hastily hopped aboard. “Too often, we’re brought in by clients who’ll say, ‘We want to be like Google’,” says Marcia Mayhew, CEO of office interior designers Mayhew Inc., who then must deliver this reality dose: “Only Google is Google.” Still, everyone from banks to law firms come to her wanting cool, open, interesting spaces—whether they work for their workers or not.

Take Carol Boland, an office admin at an office unnamed for obvious reasons, which recently underwent a makeover. Retro cubicles and a meeting room were removed, and in their place, 10 connected desks with five employees on each side. Among them, a man who once enjoyed a private office and his neighbour who built a wall of Post-its so she won’t see people in her periphery. There’s also a knuckle-cracker, a throat-clearer, an over-perfumer and a loud-talker. That last one’s Boland, who’d much rather be described as “gregarious,” although in this situation she doesn’t feel she can speak up. “The reno is brand new and cost a lot of money,” Boland says. “There’s no saying it’s bad, and it’s not politically correct to admit you don’t like it.”

Mayhew sees this often too: “These companies spend a ton of money on fantastic spaces but forget to prep the people,” she says. Without guidelines, people don’t know what’s okay, let alone how to talk about it. Until they’re online and anonymous, that is. Type “open offices” into Google and let autofill reveal the undeniable truths about the so-called collaborative workspace: Open offices don’t work, are overrated, and productivity is terrible. A very unprofessional Facebook poll I took invoked these complaints and many more: Noise, distractions, germs, overstimulation, acoustics, loneliness, lack of storage, lack of privacy, temperature, even headaches and physical bodily pain. “Open offices are hell,” said one.

But in an era where “interaction,” “collaboration” and “communication” are buzzwords on every resume, good luck getting workers to concede that they’d actually much rather be alone. Everyone I spoke to at Shopify, for the record, raved endlessly about how the space fuelled creativity and interaction with colleagues. Software engineer Zuwa Omigie, a Shopify employee for just 6 months after leaving a corporate cubicle gig, is particularly impressed with how easy it is to make new friends: “The open concept makes you way more likely to interact,” he says over an oatmeal breakfast bowl.

Only it really doesn’t, found Harvard business professor Ethan Bernstein. “For quite some time, there was this assumption that of course an open office led to more collision, interaction and performance.” In hopes they’d prove it, Bernstein tracked employee interaction—digital and face-to-face, via sensor badges worn around the neck at two, large American (also unnamed) Fortune 500 companies transitioning from traditional to open spaces. In both cases, face-to-face interaction did not rise as managers had hoped, and in fact suffered a 70 per cent decrease. “Communication altogether didn’t drop,” explains Bernstein, “it just shifted to electronic.” Bernstein asserts this isn’t necessarily bad, it’s just not the intended consequence of the open office, and we shouldn’t pretend otherwise.

A common adage says the only thing worse than being alone is feeling lonely with someone else, though a tense office with mounting irritations might trump both. Over three decades in corporate conflict resolution in Vancouver, Deborah White has watched the proliferation of open offices transform her field—and not for the better. “If I have something I need to say to you but I can’t say it because we’re in an open space and everyone’s listening, that’s torture. I see people who sit beside each other every day and never even speak.” Those bad vibes, meanwhile, will not go unnoticed. “Avoidance is poisonous and not just to you,” says White. “It will spread like a virus through the whole place.”

That silent fishbowl feeling is particularly felt by women, an accidental finding by Rachel Morrison at Auckland University of Technology. While studying how open offices and hot desks (unassigned first-come, first-served seating) affect work relationships, Morrison sorted her responses by gender. “I wasn’t expecting it, but it turned out it was almost entirely women who had complaints,” she says. “Women became more aware of being seen and being judged on their appearance.”

Morrison’s findings echo those of a 2018 study conducted by Anglia Ruskin University and the University of Bedfordshire in the United Kingdom. The study showed women changed their wardrobe and makeup when they transitioned to all-glass, open spaces. And no matter what they’re wearing, pressure on women to be consistently happy and friendly is exacerbated when there’s nowhere to go for a breather. “You can’t have a bad day, you can’t just go hide in your office if you need to. You’re being watched by everyone else, all the time,” says Boland.

A larger distinction than gender, however, could be generation. Anyone who once enjoyed their own space probably will never love the hot desk. “I sit in front of a computer screen for eight hours a day,” says Sue Baker, a contract negotiator in Toronto’s film industry. “My screen’s at the right height for me, so are my ergonomic chair and arm rests, my keyboard’s in the right spot for my carpel tunnel.” (Baker, like every other employee in this piece, requested her age not be mentioned.) Though the walls in her office have been slowly coming down, she hasn’t had to forfeit her space just yet. “I still have my office. With a lock.”

Those who never had their own space to begin with, however, might not even want a door to close. Despite all their qualms about open offices, a 2019 study from Future Workplace found more than half of millennials and Gen Zs want open concept spaces. The younger they are, the more they want it, and vice versa: 47 per cent of Gen X and just 38 per cent of boomers prefer an open plan. As older workers retire, shared space will become the norm—if we go into offices at all, that is. It’s an increasingly digitized world. “Honestly, I don’t think the next generation of workers will even care,” says Morrison.

Until then, with a backlash growing against wide-open spaces, the workplace is transitioning again. “The future will be all about flexibility,” says George Papadatos, an interior design consultant at Mayhew. The industry currently calls this “resimercial” (residential plus commercial), and Shopify’s many cozy rooms are an excellent example. “Just like when you’re at home, there are times you want to be in your office and times you’d rather go to your den,” Papadatos says. “We want people to feel at home and at work at the same time.”

Though perhaps counterintuitive, blurring the lines between home and office might make workers more productive at each. “The more comfortable we are, the more productive we can be,” says productivity coach Clare Kumar. Except we all experience comfort in different ways, which could be an office asset if managers tried harder to match spaces with personalities. “If you actually ask people, you’ll find that someone loves to work in a group by the window while another person prefers the closed dark office.” The latter sounds heavenly to Boland: “I’d love to be tucked into a corner; even two walls would be great right now.”

“The open office will always suit some people and never suit other people and probably the best thing we can do is concede to individual choices,” says Morrison. Hybrid spaces like Shopify are the future, explains Bernstein, though he warns they may not deliver the diverse collaboration that companies so badly seek. “If you choose the space you like and I choose the space I like, and all the people who are like me choose what I choose, and those like you choose what you choose,” he says. “Well, now we’re back to the high school cafeteria.”

At least in this version of high school revisited, it’s totally cool to choose your uncool cubicle—even with so many more interesting options on offer. At Shopify, they creatively call them “pods.” Albeit with trendy standing desks and panoramic views of the city, pods are very small familiar-looking dedicated spaces in dense, efficient rows. On this morning, about half of Shopify employees chose to hunker down here. 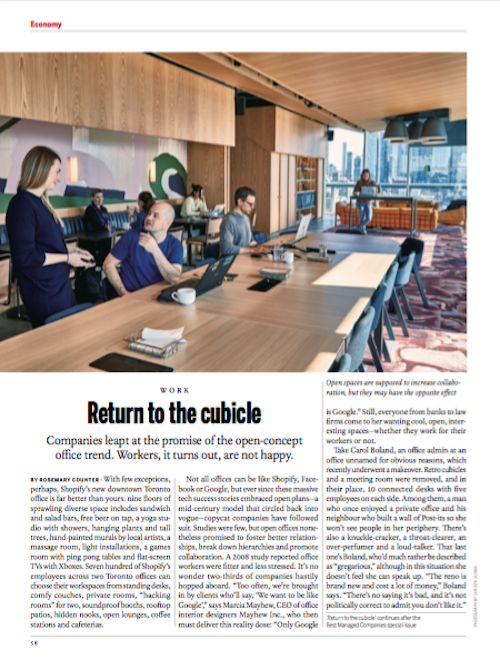 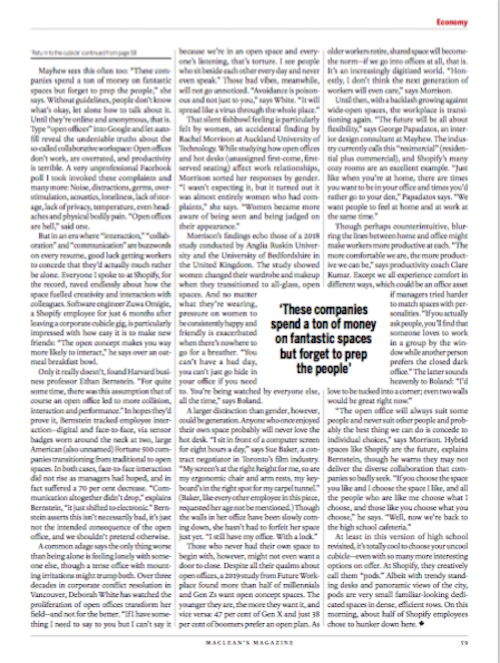