Is your engagement obsession derailing your relationship?

After eight long years, we can only imagine that Kate Middleton – also known as “Waity Katie” – was dying for Wills to hurry up and put a ring on it. Then again, we could just be projecting: While marriage rates are on the wane, our collective engagement obsession has never been greater, according to Anne Kingston, the Toronto-based author of The Meaning of Wife. “It’s the product of several cultural forces: the princess goal that has infected popular culture – via Disney, of course – as well as a spate of cheap-to-produce reality shows that suggest that winning a huge rock from a total stranger is a major female ambition,” she explains. “When you have a rare real-life princess, like Kate Middleton, enter the picture, the hysteria level mounts.”

Not to mention our own engagement expectations: A recent study commissioned by Men’s Health and TheKnot.com found that one in four women didn’t exactly love how their man proposed, with some wishing that it was more romantic or original. (We can only hope they haven’t told their guys as much.) In the interest of keeping the marriage mania in check, we spoke to three honest women with various strains of acute engagement ﬁxation and asked the experts if they’ve gone too far. These are their stories.

ENGAGEMENT FIXATION #1: Your wedding deadline is a ticking time bomb.

Just a few months shy of her 30th birthday, Melissa* feels like she’s totally off track. “I always wanted to be married by the time I was 25,” says the Mississauga-based public-relations professional. “I ﬁgured that I’d be done university, have started a career and have had enough time to meet someone.” She’s done all that just ﬁne, albeit ﬁve years behind her self-imposed schedule, but her guy – three years her junior – isn’t quite on the same timeline: In order to contribute his fair share, he’d rather wait until his salary is on par with hers.

“We joke about the fact that I can’t be an old broad,” she says, relieved that they can laugh about it without him recoiling with commitment phobia. Meanwhile, Melissa watches every bridal show on television, has planned her wedding menu and seating and, though she doesn’t torture herself by visiting jewellery stores, knows that she wants three shiny rocks on her ring ﬁnger. They’ve been dating for less than two years, but she’s pushing for a 2012 wedding. “I’d say that on a crazy scale of one to 10, I’m about eight,” confesses Melissa, “but he’d probably say 15.”

HAS SHE GONE TOO FAR? “Being on a timeline is never a good reason to get married,” says Christine Fall Moore, who counsels both couples and individuals in Halifax. When one partner is ready and the other is not – no matter what the reason – the absolute worst thing you can do is try to push the relationship forward. But all is not lost for Melissa: As Moore says, the best way to approach mismatched expectations is to talk about them and see whether the couple can reach common ground. “Each partner should be able to discuss what he or she wants out of the relationship [which Melissa and her man have done],” says Moore. The bottom line? If your guy has a good reason to slow down, then it’s best to back off.

ENGAGEMENT FIXATION #2: You love the chase. But the commitment? Not so much.

Fortysomething Natalie*, a curator at a Toronto gallery, won’t divulge how many times she has been officially betrothed – but the rumour is six. “Let’s just say that I’ve been really close to the altar a few times,” she says. “Whenever I’m engaged, I feel a sort of overwhelming relief.” There was the cruel businessman, the romantic Frenchman, the struggling musician. One man proposed twice, a decade apart – Natalie said yes to the ﬁrst proposal and no the second time around. And, though she truly loved the guy, she rejected yet another proposal for fear that the marriage would turn into the doomed present-day plot line of Blue Valentine.

But even the most idealistic of ﬁancés has expected Natalie to perform certain wifely duties – such as cooking dinner and planning family birthdays – which isn’t the kind of relationship she wants. “I think engagement is when you really start acting like you would in the marriage,” she says, “and that can be great or disastrous, as has been the case for me.” That said, she’s currently involved again (“He could be the one,” she says excitedly) and still believes that there will be wedding bells in her future.

HAS SHE GONE TOO FAR? “Women view engagement in a very different way than men,” says Kimberly Moffit, a Toronto-based psychotherapist. Because we don’t go through the logistics, like purchasing a ring and planning the proposal, we don’t process the idea of engagement in the same way. Saying yes automatically – as Hollywood says we should – can set us up for a major romantic meltdown: “Now that you’re engaged, you start to think, ‘Oh my god, this is the rest of my life!’ And that’s when the problems start.”

In reality, engagement should be a preparation for something stable and lifelong. And if Natalie isn’t feeling that – or if she realizes that she can’t be true to herself in marriage – then she should question whether getting hitched is something she really wants. “Women feel so much pressure to settle down, which is why they get ﬁxated on being engaged,” says Moffit, who works intimately with couples in distress. “But marriage isn’t for everybody. Trust me, I know.”

ENGAGEMENT FIXATION #3: You’ve planned your big day down to the party favours, but still no ring.

Ever since her 23rd birthday, Lindsay* has documented every detail of her dream wedding in a binder, complete with tabs for dresses, food and favours – all culled from the wedding magazines she bought religiously. The Toronto-based teacher, now 30, wanted to be ready. “I knew when the time came, I could ﬂip to the dress section and say, ‘Here are the 500 dresses I absolutely love,’” she says.

Luckily, her boyfriend was more understanding than most. “Though he was always very ‘anti-wedding,’ he knew I was obsessed, he knew about the book and he knew how much thought and energy I had put into getting and being engaged,” she says. After eight years – many moments during which Lindsay was certain he’d propose – she was still ring-free and utterly disappointed. “When I complained that we were never going to get married,” she recalls, “he said he worried that I wanted a wedding but not a marriage.”

HAS SHE GONE TOO FAR? Even Gay Derk, president of the Bridal Fantasy Group in Edmonton – which organizes bridal shows across Western Canada – will admit that many of our wedding fantasies are out of reach, be it a matter of personal ﬁnances or unrealistic expectations. And if you’re already stressing over every detail, it’s only going to get worse once you’re engaged. “Talk about a good way to get off on a bad start,” she says. “Shows like Say Yes to the Dress and Bridezillas have turned weddings into this me-me-me thing for the bride, but it’s really about you and your ﬁancé.”

Lindsay’s wedding plans were quashed when the couple unexpectedly got pregnant. She packed away her wedding binder and together they made a new plan: a shotgun wedding at city hall, with Lindsay wearing a black dress she bought on sale and holding $20 worth of tulips in her hands. But she wasn’t at all disappointed: “Somehow it was more ﬁtting than me in a white poufy dress in a church,” she says. Now, having made a full recovery from her engagement ﬁxation – as most women do – she can fully enjoy the rest of her life as a happily married mom. 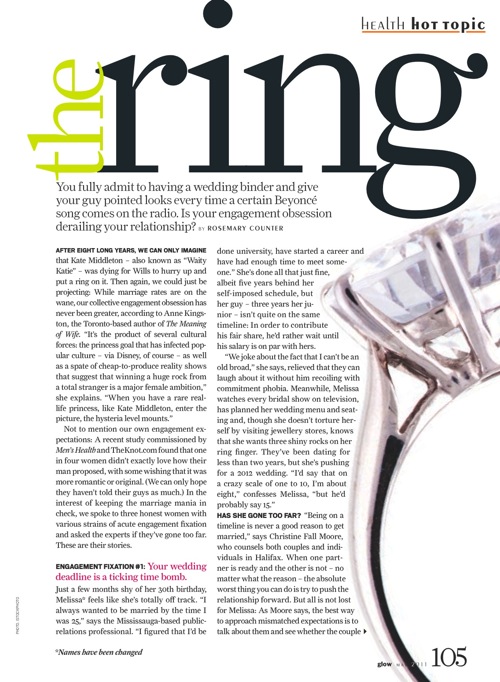 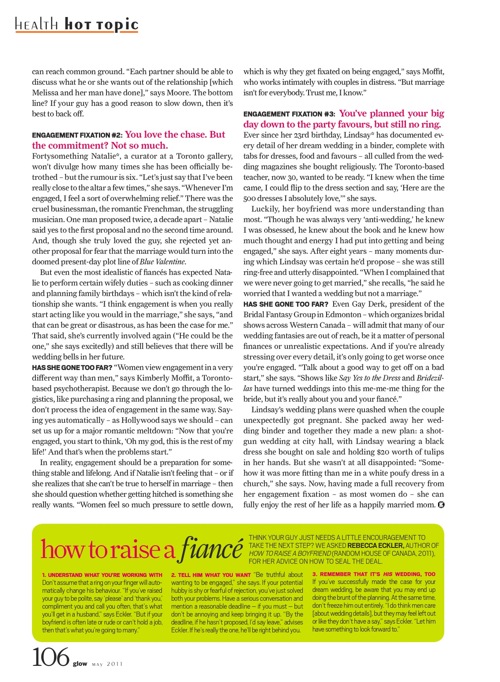