The ugly behind an ugly sweater party

Head to a thrift store, raid an old closet — whatever you do, make sure it’s tacky

This December, as he has for the past six years, filmmaker Andrew Cividino will invite 40 of his closest friends and family into his Toronto home. A hired barbershop quartet will croon carols, guests will sip on mulled wine and egg nog spiked with rum, and then, right in the middle of the festivities, everyone will stop chatting and convene in a central location.

This is when things get ugly. He means ugly sweaters, of course, and he isn’t joking. “The worst one I ever wore was my mom’s vest, covered in poinsettias with gold glitter, all atop a dickey,” he says. It was a fitting tribute to Mom, since Cividino was inspired to start this tradition by his parents’ campy Christmas parties and their fine selection of old clothing. “My dad had this incredible collection of sweaters,” says Cividino. “Once fashionable and expensive, but times change.”

According to ugly sweater aficionado Brian Miller, co-author of the Ugly Christmas Sweater Party Book, it was right after the millennium that hipsters began raiding old closets and thrift shops to reclaim garish as their own.

“Ugly sweater parties started popping up in the early 2000s, depending on where you lived in North America,” says Miller. (One popular theory has Vancouver as the original source, and Canadians as particularly prone to the ugly sweater.)

Poor pullovers brought Bridget Jones and Mark Darcy together in 2001’s Bridget Jones’s Diary. The theme grew from an annual holiday party out of a B.C. living room in 2001 to a full-on fundraiser at Vancouver’s Commodore Ballroom by 2006, and by 2008 the term scored spot No. 118 of “Stuff White People Like.”

In recent years, ugly sweaters began popping up on the runways of high-end designers — Stella McCartney’s feathered-arm monstrosity sold for $1.600 and Marc Jacob’s bedazzled red cardigan reaped $1,300 at the tills. It then trickled down the fashion hierarchy. Topshop’s Penguin Jumper is exactly as it sounds and Abercrombie & Fitch’s version sports a woolly moose. Even the NHL hopped aboard the trend this August with officially licensed NHL sweaters, a tackier jersey that retails for $70.

For traditionalists, however, there’s not much respect for merely plopping down a credit card. “If we were to add one party rule,” says Cividino, “it would be no online shopping.” Much like Halloween, creativity and ingenuity rule. “Value Village is usually pretty stocked, but your grandparents’ closets are always best.” Double points if you grab a glue gun and make your own.

Ugly is in the eye of the beholder, of course, but experts have a keen eye for grisly getups. “A sweater is ugly when it’s obnoxious, when something sticks out, sometimes literally,” explains Adam Paulson, Miller’s co-author. “Anything 3D is great, anything with cats is hideous. The more colours it has, the more stuff it has, the uglier it is. If it looks like a bunch of scrap materials all stitched together, that’s a good one.”

At Cividino’s house, where competition is fierce, lights and electronics and sound effects are encouraged. His particular favourite sweaters, however, are when the thin line between tacky and creepy is crossed. “That’s when a sweater should be cheerful, but something about the faces are off,” he explains. “Maybe Grandma wasn’t a great knitter or the wool’s all stretched in the wrong places and suddenly it feels like you’re in a Kubrick film.”

The winner receives “a half-baked trophy and some fully baked goods,” says Cividino. This is wise, say the experts, who advise your prize fit the theme. “I think we spend all year trying to look good, and an ugly sweater party gives everyone a night to look like an idiot and not care,” says Miller of the party’s growing appeal.

It’s also an easy way for companies to skip a formal soiree and cleverly dodge the religion-at-work issue. “An ugly sweater party is a good way for a company to throw a politically correct party that’s kinda fun too,” Miller says. “Plus, it’s always fun to see the VP in a sweater with two snowmen hugging.”

Ugly sweater parties are easy, low-key and cosy — a silly party for grown-ups who’ve maybe outgrown wild Halloween shenanigans but, deep down, still harbour some costume spirit. For these people, no matter how ugly you’re willing to go, the rules are simple and few: “You have to wear an ugly sweater, and you can’t wear the same sweater twice,” says Cividino.

No sweater, no respect. “And no mulled wine either. You can forget about it.” 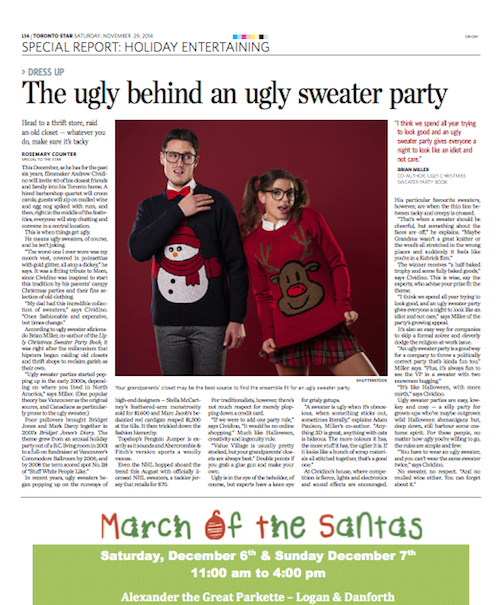