The weeds are a great place to be

I know I’m supposed to spend time reflecting on the big picture, but I spend most of my time in the weeds. How do I pull back?

First, a question: Where did you get this ridiculous notion? “The idea that the big picture is separate from the little details is salacious and even dangerous,” explains Henry Mintzberg, a professor in the Desautels Faculty of Management at McGill. The author of Bedtime Stories for Managers has endless examples of how wise CEOs thought small to go big: Steve Jobs, for one, spent his mornings in the lab developing products. “Most CEOs don’t do this, but the best ones, like Jobs and [Amazon’s Jeff] Bezos, are deeply personally engaged,” says Mintzberg. “That’s actually what makes them effective and what ultimately lets them see the big picture.” Remember the old cliché about forests and trees? If you look at a forest from a helicopter, it looks like a fuzzy green carpet, says Mintzberg. That’s neither useful nor helpful. “You don’t have to be everywhere all the time, but you do have to be on the ground to see what’s happening.” Stop belittling the weeds and instead see them as the brush strokes that form the big picture.

I suspect one of my VPs is a jerk to his subordinates, but he’s always lovely to me. What should I do?

“A CEO needs hard data, since it’s difficult to make any real judgment on gut feelings or anecdotes,” explains Shelley Brown, founder of Bromelin HR Consulting. The best way to gather info is by hiring an outside consultant to conduct a 360-degree assessment. This increasingly common process involves sending an online survey to the executive’s direct reports and peers, who answer questions about his management style. If it feels awkward to focus on just one individual, then don’t single him out. “This is a very good time to have the whole leadership team assessed. You’ll have benchmark information that shows if it’s this particular VP or a bigger problem,” says Brown. If the results con rm your hunch, do not immediately re the jerk. “Everybody deserves a chance to get better, and some people have low self- awareness,” says Brown. “If he’s just lacking these skills, you can work on him. But if he lacks motivation to change, that’s a whole other story.”

My communications team wants me to join Twitter. Should I?

Too many bosses—particularly those who are members of Gen X and older—shy away from Twitter and other social media, says Jana Seijts, a lecturer in management communication at the Ivey Business School. Yet very few have a legitimate reason for this avoidance, other than fear of the unknown. “Social media is a wonderful megaphone, and it’s at your disposal,” Seijts says. The bene ts outweigh the slight chance you’ll make a Twitter misstep. You just need to consider who you are, the message you want to send and what you’re willing to share. If your account is all business, you’re not doing it right. “We’re in a time of storytelling and personal relationships,” she says. “Think about your passions apart from business.” Steer away from politics (to start, at least) and toward crowd-pleasers like lms or sports. “Allow yourself to be vulnerable and authentic,” says Seijits. But you’re not alone in this. “Sit down with the communications team and come up with a solid personal branding strategy,” she says. Put some trust in their judgment. That’s why you hired them. 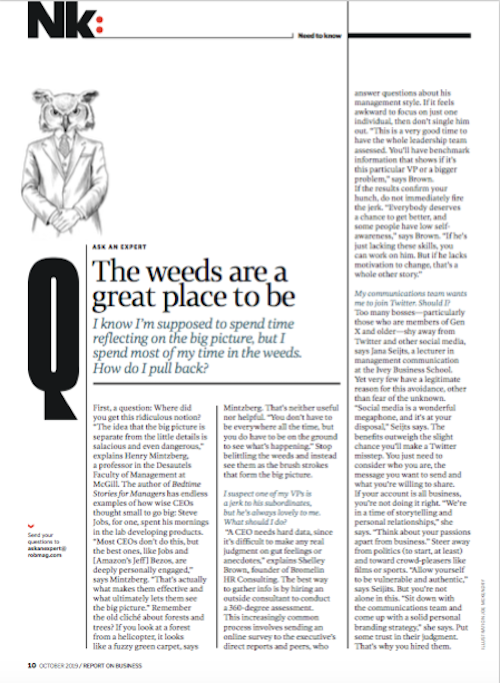