To Fix or Not to Fix

Craving a quick facial tweak or two? Before you remove or conceal whatever’s bugging you, look inward.

When Basma Hameed was just two years old, she was playing in the kitchen with her six-year-old brother. They decided to impress their parents by making a meal. But when a pan of hot oil caught fire, her scared brother tripped and spilled the burning old on his sister. A permanent burn covered 40 per cent of Hameed’s face.

“As you can imagine, growing up wasn’t easy,” she says. “I’ve had more than a hundred surgeries—reconstruction, lasers, skin grafts, you name it.” Hameed has spent more money than she could ever count, tried every cream and makeup, and travelled to Europe and the Middle East in search of something—anything—to improve her face.

It’s an extreme case, and no one would argue Basma’s want to better her appearance is justified. But when it comes to plastic surgery, it can be a fine line between corrective and cosmetic. Take my beautiful friend Faith, for example, who has what she considered a not-so-beautiful dark mole the size of a dime on her cheek. Removal, she felt, would not only improve her appearance, but also her self-esteem and the way she interacts with the world.

Enter psychodermatology, a new medical field that links self-esteem and body image with dermatology and the medical processes happening in the body. Leading the pack is psychologist Dr. Linda Papadopoulos, Canadian-born and London, England-based author of Psychodermatology and Mirror Mirror: Dr. Linda’s Body Image Revolution. “When you’re walking around with an internal illness, it’s yours,” she explains, “but when you’re walking around with something on your face, it’s kind of everyone’s. People feel entitled to stare at it or ask about it.”

Whether it’s good news or bad, “the stigma is worse than the condition.” No scar or skin disease—acne, eczema or psoriasis, for example—is physically handicapping, but all can be psychologically debilitating. Studies on disfigurement—and their pop culture mainstream doppelgangers like Slice’s show Plastic Makes Perfect—often use prosthetics and makeup to explore this topic. “When subjects are told they’ve got a big scar on their face, they come back from being in public saying it was awful, everyone stared—only to find out there was no scar,” she says.

And what about the viewers at home? “I’ve seen people refuse jobs, skip holidays, cancel weddings—all because of negative self-image,” says Dr. Papadopoulos. Of course, if you’re already blessed with natural high self esteem, this may seem ridiculous. If you’re not, you may find yourself—like this writer has many times—staying home “sick” with a pimple. “It all depends on how invested you are in your appearance and if you’ve based your self esteem on your looks rather than your personality and abilities,” she adds. So if you’re considering going under the knife or laser for a quick fix-me-up, how do you know it’s not your self esteem that needs tweaking?

Dr. Michael Weinberg, MD, MSc, FRCS(C), a plastic surgeon in Toronto, looks for more in his patients than just informed consent. “If someone comes in covered with acne scars and says he or she wants perfect skin, I have to say I can’t help them. I’m looking for reasonable people with realistic expectations. If someone says their scar is all they see and they need it gone today, the answer is ‘No’. If someone believes they can’t get a job because they have a two millimetre birthmark on their face, then ‘No’. If they think, if only I didn’t have this, my self esteem would be better, they’re wrong.”

Hameed agrees. Long before she discovered the permanent makeup that covered her burn, she learned something better: acceptance. “Growing up, the number one thing I learned was to accept my burn. If I didn’t, I’d still be looking to fix this or change that. Because there’s always going to be something, and you’re never going to be happy,” she explains.

Hameed founded the Fabulousity Beauty Clinic in Toronto and distinguished herself as a leading professional in the permanent makeup field, specializing in scar camouflage. (She won’t be seeing my friend though; Faith has decided she now loves her mole. “It even makes me feel special,” she says.)

But if you love yourself and your life just fine and still feel a little something will make you love yourself a bit more, you’re likely in the right headspace for surgery. “Corrective surgery certainly has its place and I’d never judge any women who wanted it, but you do have to ask yourself why,” says Dr. Papadopoulos. A good formula, says Dr. Weinberg, is one that’s all relative: “If your perceived flaw is as small a part of your life as it is on your face, you’re probably a good candidate.” 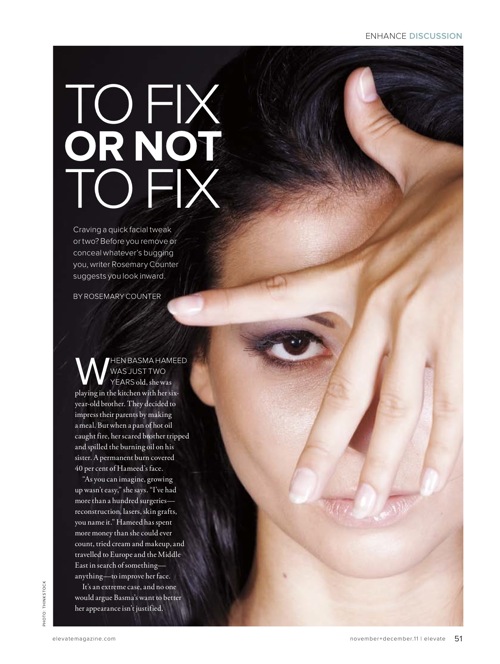 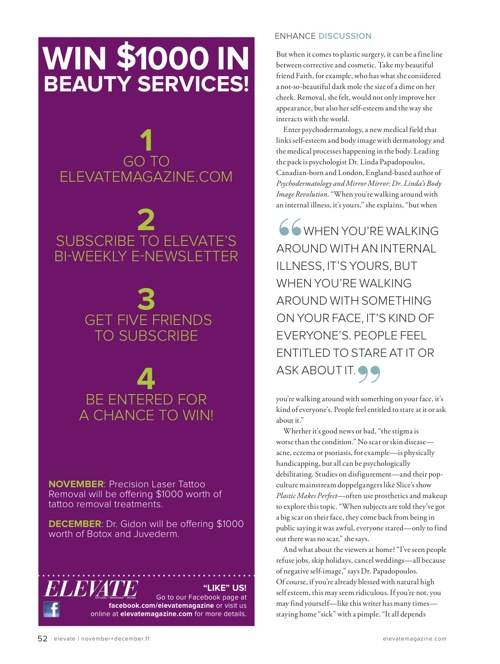 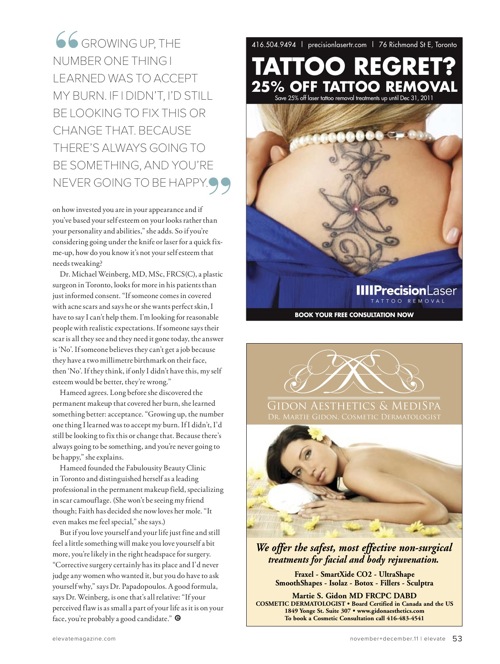