Health trends are plentiful, but which ones are worth your time and money?

It’s 3 a.m., you can’t sleep and there’s nothing to do but snack and channel surf. Luckily, it’s also prime infomerical time, which, if you’re susceptible to buying new health products or blankets with arms, can get dangerous fast. My early-morning hankering is the new healthy baby food version of the Magic Bullet, The Original Baby Bullet. (Note: I have no baby.) The point is, health trends are never ending, but not all of them are really worthy of a place in your life. Before you switch to an all-baby-food diet, we put the newest health fads to the test. Now pass me my credit card.

VIBRAM FIVEFINGERS
The Buzz: Seeing strange toed shoes on the street? They’re leading the so-called barefoot revolution and claiming to “bring you closer to your environment” while strengthening muscles in your feet and legs, improving your ankles’ range of motion and stimulating your neural function to help balance and agility.

Experts Say: These lofty claims are unsubstantiated, says Benno Nigg, author of Biomechanics of Sports Shoes (University of Calgary Press, 2011) in Calgary. “Nobody knows if these shoes offer an advantage or disadvantage; the research just isn’t there,” he says. Despite the supposed advancements in the orthotic industry, high-tech shoes have made little difference to the frequency of running injuries.

Embrace It Right: “If a shoe is comfortable, that’s your best solution,” Nigg says. Don’t be too dazzled by high-tech trends. “If Vibrams are comfy for you, then I’d recommend them,” he says. “If they’re uncomfortable, stop wearing them.”

SOCACIZE CARIBBEAN DANCE AEROBICS
The Buzz: Like Zumba gone Caribbean, Socacize uses various dance styles – African, soca, calypso, chutney, zouk and reggae – in an aerobic and weight-training routine that claims to burn 1,000 calories an hour. A blend of cardio and toning is aimed at the usual trouble spots: arms, abs, legs and bottoms.

Experts Say: The math is a little off, especially if you’re shy about your dance moves, but Socacize gets a big thumbs-up from Nicole Palacios, a certified trainer in Vancouver. “This routine would be great for people who already exercise and want to try something new,” she says. “But it’s not the greatest for people who are brand new to exercise, or people with back or joint problems.”

Embrace It Right: Social workouts work, say researchers at the University of Saskatchewan who found that participants in class settings have better attendance and participation rates than solo exercisers. Socacize founder Ayanna Lee-Rivears agrees: “The whole point is the group. You feed off each other’s energy and push each other to work harder.”

CRYOTHERAPY (OR COLD SAUNAS)
The Buzz: Imagine applying an ice pack to a sprained ankle. The new cryotherapy claims to shrink blood vessels to ease an array of symptoms – joint pain, rheumatism, arthritis – by submerging the body in a -110°C environment for three shivery minutes. It’s not quite as relaxing as a massage, but cold saunas are nonetheless popping up in Canadian spas.

Experts Say: “Full-body cold immersion has been used primarily in sports, where it was felt the cold would reduce the trauma that occurred in the body,” explains Sandy Rennie, director of the School of Physiotherapy at Dalhousie University in Halifax. There’s reliable research that supports the idea that cold temperatures control swelling, but there is nothing just yet that shows whole-body immersion improves health or performance. There’s also no evidence of cryotherapy’s benefits in relation to mood, skin or weight loss – despite what chatty spa goers are saying.

Embrace It Right: If you can brave the subzero temperature, cold therapy should release endorphins and invigorate you. So should a cold bath. “Short periods of cold-water immersion after rigorous sporting activities may make athletes feel better, but there is no proof that it improves performance,” says Rennie.

FITBIT
The Buzz: The new FitBit Ultra, a gadget smaller than a USB stick, slips into your pocket or is worn on your wrist to monitor your diet, activity levels – even your sleep quality. Your stats are uploaded wirelessly and logged at fitbit.com. FitBit creators believe, “the more you know, the more motivated you’ll be.”

Experts Say: According to the world’s largest weight-loss study, published in The New England Journal of Medicine in 2009, despite the unending numbers of fad diets, the only real way to battle the bulge is to burn more calories than you consume. But those who keep a food diary, reported The American Journal of Preventive Medicine, lose twice as much as those who don’t.

Embrace It Right: Old-fashioned diet and exercise aren’t fads, says Palacios, but they’re often easier said than done. “Anyone interested in how much they’re really exercising and how many calories they’re really burning could benefit from this product,” she says. Those who aren’t techies, however, can use the same strategy with a three-ringed binder.

P90X TRAINING
The Buzz: The much-hyped P90X, a 12-DVD workout set created by celeb fitness guru Tony Horton, uses “muscle confusion” so that your body improvements will never plateau. For about $150, Horton’s plan claims to transform your body with just an hour of exercise a day in your own home.

Experts Say: Personal trainers (and discouraged exercisers) are all too familiar with plateaus. “With any workout, if you do it too much, your body will quickly adapt and you’ll stop losing weight and gaining muscle,” says Palacios. Like Horton, she recommends switching up your routine at least every six weeks. “These workouts are based on principles used by fitness professionals, not just fly-by-night fitness inventors.”

Embrace It Right: It’s always good to vary your workout, but you probably don’t need Tony Horton to tell you that. If you’re not sold on the idea of pricey DVDs, trying a different activity, such as hot yoga or rock climbing, can also activate new muscles – and get you out of the living room.

CAVĒNA GRAIN (A.K.A. RICE OF THE PRAIRIES)
The Buzz: Since wowing the judges on CBC’s “Dragon’s Den,” the Canadian makers of Cavena Nuda are pushing “the next step in the evolution of oats.” Cooked and served like rice, Cavena is a high-fibre, wheat-free complete protein popping up on grocery shelves across the country.

Experts Say: Despite its almost too-good-to-be-true claims, Cavena gets the stamp of approval from our own nutritional expert. “Like oats, Cavena can help lower cholesterol levels and stabilize blood sugar,” says Cara Rosenbloom, a registered dietitian. “Studies show people who consume more whole grains have a lower risk of heart disease, cancer and diabetes.”

Embrace It Right: If you’re looking for something more interesting than pasta or rice, Cavena is an easy switch (with more protein and iron to boot). Recipes on the brand’s site, mysmartfoods.com, include cabbage rolls, beef bake and power spinach squares – all wheat-free.

We’ll take a Pass, Thanks:
While some trends have staying power, we’d like to see these fads move along as quickly as they arrived. Good riddance.

• The Calorie Shaper
“Do nothing and burn calories!” You can achieve this by wearing an uncomfortable “honeycomb” fabric that makes it harder to move, say creators. In our books, this isn’t just an empty promise; it’s a poor fashion statement.

• The Situation Workout
Michael Sorrentino, better known as The Situation on “Jersey Shore,” is a boozy reality star, not a fitness guru. Don’t just skip his workout DVD, but pass up his protein-infused vodka, too. Tanning booths are equally passé.

• “Snack” culture
McDonald’s Angus Chipotle BBQ Bacon Snack Wrap is full-size and, in addition to 400 calories, it contains one-third of your day’s fat requirement and half of your daily recommended sodium intake. It’s a meal, not a snack. 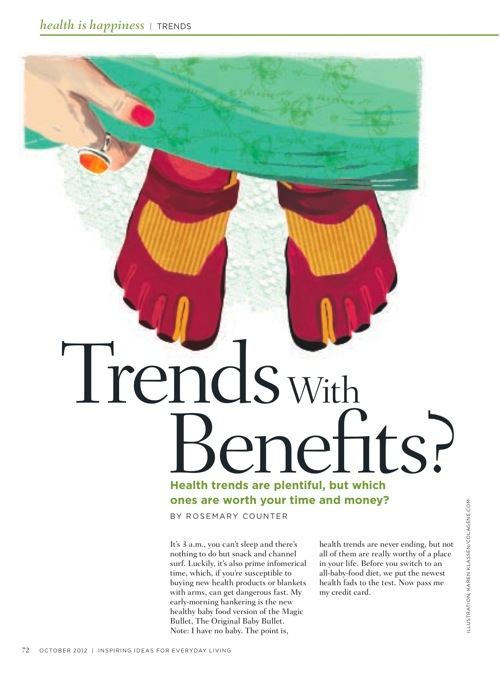 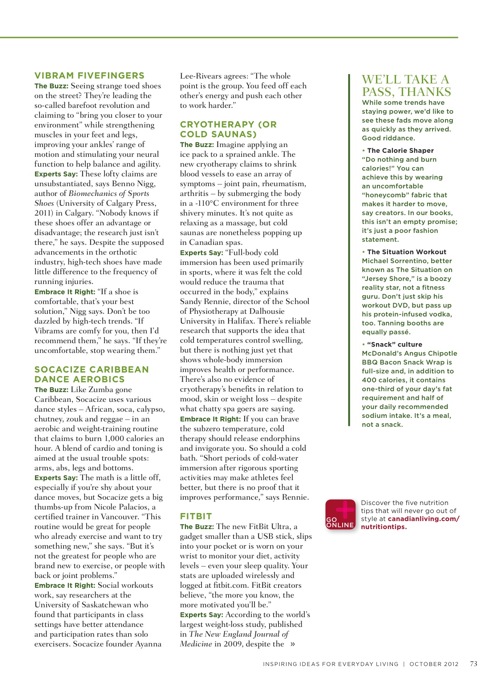 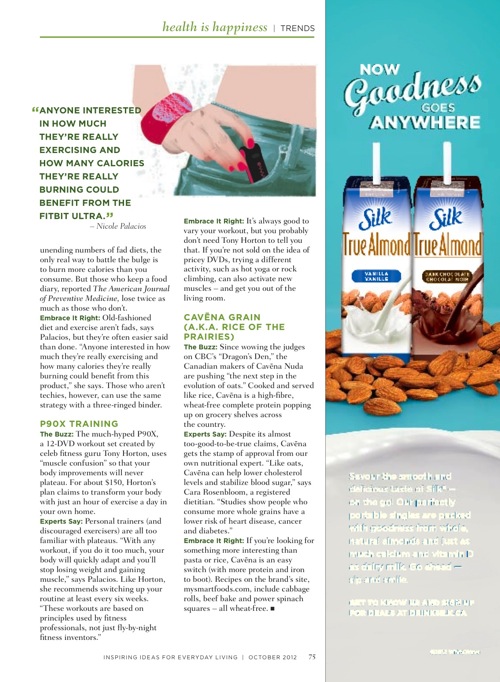