Building a personal brand is not for the faint of heart

Who are the more than four million so-called “mompreneurs” turning mundane daily details of life with kids into cold, hard cash? How can a new mom like me go from the former to the latter? And once you get there, is mommy blogging really the at-home, swag-filled, no-research-required dream gig people think it is?

I doubted it. But to learn more, I reached out to three women making it big in the world of mommy blogging to ask.

Already, I was way off. “Mommy blogging, mompreneurs, mommy anything can be offensive,” warns Vanessa Rempel, one half of Vanessa + Melissa, a four-year-old TV show turned blog turned vlog. None of the bloggers in this piece is particularly offended by the term, which is why I’m still using it, but slapping a reductive label on the wide range of work from writers, photographers, influencers and content producers in this space inherently contradicts the whole point of mommy blogging: finding your unique voice so that readers can find you.

Six years ago, Maya Fitzpatrick of Mayahood Blog added a year to her first maternity leave during which she got pregnant again, so she, with her husband’s support, decided to stay home indefinitely. Fighting the baby blues, she began to blog. “I didn’t think anyone would actually read it, so I didn’t really think of it as a business,” says the Toronto mom of three boys.

A passion project turned profitable is a dream come true for most bloggers, and a not uncommon origin story. Marielle Altenor, the brains behind the Lady Marielle blog, began in much the same way. “I used to post my recipes to Facebook, but when people started to seem tired of it, I started a blog instead,” says the mom of two from the Montreal area. Lady Marielle is part food and part parenting, depending on how real life is unfolding, and as Altenor’s readership climbed higher and higher, blogging suddenly became a viable career option in late 2016. Brands reached out to her for partnerships—which are a big part of many influencer business models—at around 5,000 followers but Altenor says there’s no official magic number to hit before payday (unofficially, 10,000 followers is what many would-be influencers shoot for). “It’s not all about the numbers, it’s about engagement,” says Altenor.

“Five years ago, there was a big shift in the online world toward connection,” says Melissa Melnychuk, Vanessa’s other half. Gone are the fly-on-the-wall days of reading blogs from a strictly voyeuristic standpoint. “Now we’re creating online content that feels like you’re right there with us, so everything we can do live, we do.” The majority of Vanessa + Melissa content is now video, largely on Facebook and Instagram Live (traditional blogging fills just 30 percent of their feed) and they strive to connect with followers and readers. In this world, comments are everything.

Like most lifestyle blogs, all three of these influencers monetize their content and engagement via sponsorships; Huggies, Playtex and Disney have all recently popped up on the sites. Each spot is negotiated separately, with bloggers banking variable, tailored rates per package. But too many ads—all marked #ad, as per the law, lest you face the Federal Trade Commission—can bother and discourage readers. “I see bloggers write about diapers when their kids aren’t in diapers, and everyone knows that because they read the blog, so it comes off as weird and fake.” A few years ago, this happened a bit last year on Mayahood Blog, when sponsorships took up so much time she didn’t do any personal writing. “I didn’t write anything personal for about a month and it really put me in a funk,” says Fitzpatrick. “I felt like I was selling out my readers and it didn’t feel right.” When your whole business rides on authenticity and connection, this is a sin that’s taken seriously.

Which of course brings up another question: How much personal info is too much to upload online? For me, here’s where I get nervous: While I’m mostly comfortable dumping my own stories into cyberspace, I’m not quite sure I’m comfortable putting my daughter’s stories out there. It’s a common concern for mommy bloggers. Fitzpatrick runs her usual open-book posts by her slightly more closed-off husband for “changes I might consider” (though they don’t always agree). “I have a deal with my older kids that they have to give permission for anything I share about them,” explains Rempel. Altenor’s 10-year-old son, meanwhile, has decided he’s deserving of a cut. “I actually hired him last year to work on the blog with me,” says Altenor. “He earned enough money to buy all his own Christmas gifts.”

Happy family memories as such are very sharable, but despite the picture-perfect world of Instagram, not-so-uplifting truths exist for mommy bloggers just the same. When and if to share these stories as well is a line always up for consideration, as is whether or not bloggers “owe” gritty details to their followers. “I’m going through a separation right now, and I shared it even though I’m scared it will affect the blog or change what people think about me,” says Melnychuk. As frightening as it is to disclose, lying (even by omission) can be a worse fate.

So Vanessa + Melissa will have to evolve ever so slightly, as will all blogs to exist alongside the ever-changing lives of their creators. Each has a limited shelf life and no blogger knows how long that might be. “I hope this can go on for a while, because I feel like I’m only getting started,” says Altenor. “I think a lot about how long I can write the blog,” says Fitzpatrick. “Will it have to end? Will it evolve into something else?”

Nobody knows where the blogging world might go next, or what the net in general might look like in a few more years, so everyone’s plan in the meantime is to keep posting. But for anyone imaging a relaxing, part-time pastime while the baby sleeps, be warned: “We started this to be more available to our kids, but to actually make a living is a ton of work,” says Rempel. “You’ll be far busier than any 9-to-5 job.” That said, adds Melnychuk, mommy blogging can be far more rewarding than trekking yourself to the office. “If there’s passion behind it, it won’t feel like a job at all.”

It sounds dreamy in theory, I’ll admit, but my passion at the moment isn’t blogging about the baby experience—it’s living the baby experience. I admire the savvy businesswomen doing both, and perhaps by this time next year I’ll have the energy and gusto to be one of them, but for now I’ll enjoy mommy blogs from the sidelines. With coffee, please. 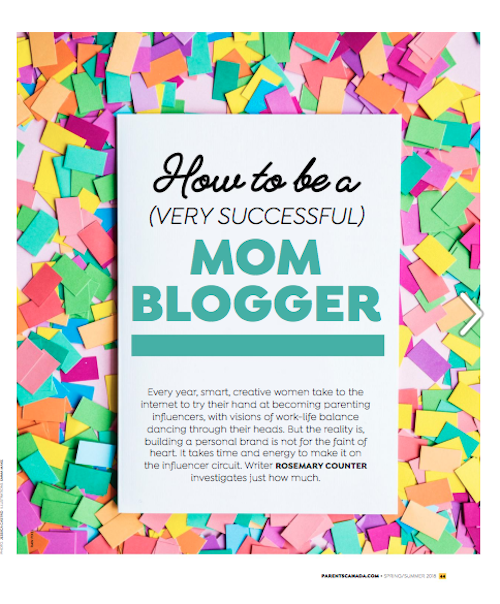 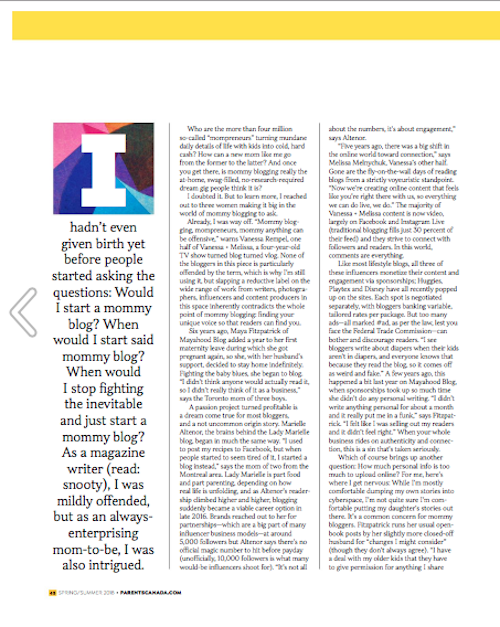 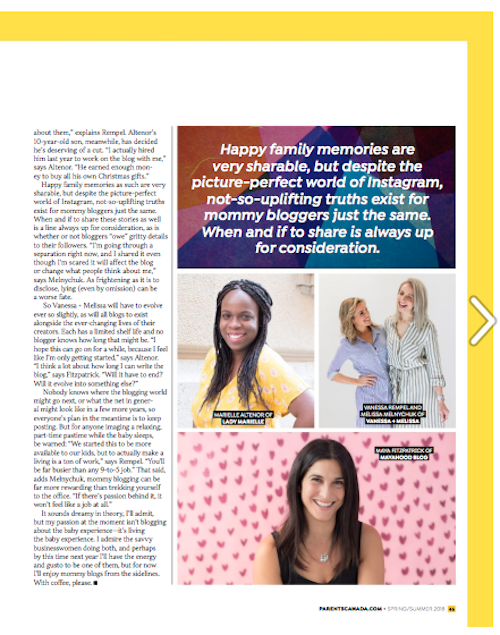