Who are you calling uncool?

Canada’s hip quotient is only going up, even if the rest of the world doesn’t know it

At the bottom of the list, however, clocks Canada as fourth least cool. The only countries less than cool than us, they say, are Turkey (an unfortunate name perfect for grade-school giggles), Poland (famously forgotten by John Kerry but remembered by George W. Bush) and, the least cool country of all, Belgium (despite their delicious waffles).

“For us, knowing how cool we think we are, the fact that the world thinks of us alongside countries like Turkey and Poland is a little disappointing,” says Jeremy Diamond, Director of Development and Programs at The Historica-Dominion Institute in Toronto. Diamond is equal parts sad and surprised — his organization did a similar poll last year, with much cooler results.

Take this, Yanks: the Historica-Dominion Institute found 71% of global respondents — including popularity queen bees Brazil and Spain — think Canada’s cool. France, themselves cool in that striped-shirt art-class way, voted us 92% cool. India likes us too, at 84%. But Turkey, though now officially less popular than we are, was just 52% likely to describe us as cool. And Sweden — our clear frenemy in the bunch — voted us just 50% cool. (Not cool, Sweden.)

“We’re our own brand of cool. Just because we’re not American, doesn’t mean we’re not cool,” adds Diamond. But our neighbours to the south are a big part of our popularity problem. “We live in the shadow of a monster,” he says. “We’re inundated with American culture — movies, music, art, tv — so it’s always been hard to carve out our identity and know what makes us Canadian.”

For starters, and I’ll be using another democratic poll system here like a good Canadian would, that would be the maple leaf, according to 101 Things Canadians Should Know About Canada. The remaining top people, places, symbols, events and accomplishments that most define Canada? Hockey, the flag and a beaver are next, followed by Canadarm, Canada Day and peacekeeping. Rounding off the top ten are Pierre Elliott Trudeau, Universal Health Care and the mighty Niagara Falls.

(The latter, we must add, is unequivocally better than the American side. We don’t even need a vote for this.)

Also on the list — likely unknown to our Swedish friends — are some pretty damn cool Canucks. We’ve got Wayne Gretzky, Pierre Berton (cool enough to get it on in a canoe), Terry Fox and Neil Young. “How cool is Neil Young?” asks Diamond. “So cool that people often don’t realize he’s Canadian.”

As far as these trendy TIFF-goers, we’ve got Canada represented just fine. Obviously the comedy competition’s over (Aykroyd, Myers, Carrey, Candy, and newbies Will Arnett, Seth Rogan and Michael Cera), but even our actors are very Hollywood-worthy. See Elisha Cuthbert, Ryan Gosling and Rachel McAdams. In fact, the reigning “Sexiest Man Alive” is none other than the eight-packed Vancouverite Ryan Reynolds — a very proud (and very built) Canadian.

But even on the cover of People Magazine, Reynolds donned a humble t-shirt. How Canadian of him. “Because we have a smaller population, because we’re laid-back and not so into patriotism, we often don’t get noticed enough. But we’re secure in the fact that we’re cool, so maybe we should just know it and not have to tell anyone,” says Diamond.

So if Badoo.com doesn’t think Canucks are hip, best to brush it off and not even care. And how cool is that? 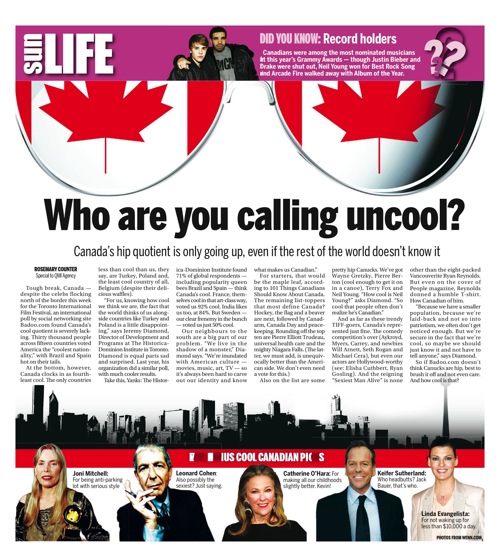