An attempt to untangle a persistent literary mystery

On October 21, Netflix premieres a film reincarnation of an old classic: Rebecca, based on the novel by Daphne du Maurier. This version—premiering 80 years after Alfred Hitchcock’s timeless best-picture winner—casts Armie Hammer and Lily James as rich widower Maxim de Winter and his nameless bride, who’s slowly consumed with envy as she grows obsessed with his first wife, Rebecca.

Published in 1938, Rebecca was an overnight success—the initial print run of 20,000 flew off bookstore shelves. Du Maurier’s fifth novel made her a literary sensation at 31, although not one without a head start. The du Mauriers were a famous and wealthy family of actors and writers. Daphne’s grandfather George du Maurier’s gothic novel Trilby introduced the now-legendary character “Svengali” to the canon; her father, Gerald, was a stage actor so famous that du Maurier cigarettes are named after him. In Daphne du Maurier: A Daughter’s Memoir, her daughter Flavia Leng described the du Maurier home as a writers utopia: “The house was always filled with well-known folk from the world of theatre and literature.” Peter Pan author J.M. Barrie was, to them, “Uncle Jim.”

Rebecca was the first work du Maurier published after nabbing a three-book deal with a fat £1,000 advance (about $88,000 U.S. today). But though she had ample time to write, the story didn’t come as easily as the money had. Du Maurier suffered from writer’s block, low moods, and frustration. “The first 15,000 words I tore up in disgust,” she confessed in a letter to her publisher. “This literary miscarriage has cast me down.”

Eventually, of course, du Maurier’s deep struggle birthed Rebecca, a novel bursting with raw emotion and mounting tension—and one that du Maurier probably didn’t pluck wholly out of her own imagination. For eight decades nosy readers have wondered: Where did the idea for Rebecca come from? Was du Maurier inspired by a real Rebecca figure—and if so, who was she? Though there’s still no consensus, biographers have singled out the most likely contenders.

Born in 1907, Daphne du Maurier had a privileged upbringing: governesses, tutors, finishing schools. Despite all that, she and her two sisters grew up imaginative freethinkers and nonconformists—especially when it came to gender and sexuality.

Margaret Forster’s 1993 du Maurier biography dives into their childhood. When the siblings performed plays, she writes, Daphne always played the male lead. Daphne embodied her masculine alter ego so often that she gave him a name—Eric Avon—and by the age of 10, Daphne had decided that she preferred life as Eric. She chopped her hair short, played cricket and rugby, and dressed in male clothing. “What her family did not realize, and this was much more serious, was that Daphne was convinced she was a boy,” writes Forster.

Like Eric Avon might have, young Daphne crushed often and intensely. At 18 she began obsessively writing in her diary about Mlle Yvon, her dark-haired, green-eyed, 30-year-old, unmarried headmistress. “She loved Ferdy, and was loved by her,” wrote Forster. That summer Yvon invited her young student with her on a weeks-long spa getaway in the South of France. By August, Forster deduces, they were lovers—“in every conceivable way,” du Maurier would later write to her friend Ellen Doubleday. By the school year’s end, Mlle Yvon was quietly fired and long gone; clearly, though, du Maurier’s memory of her did not fade.

Influential as Mlle Yvon might have been, Occam’s razor would suggest Rebecca was more likely inspired by Jeannette “Jan” Ricardo, the raven-haired ex-fiancée of army officer Frederick Browning—whom du Maurier married in 1932. After they got engaged, du Maurier went rummaging through his drawers and found a hidden stash of Ricardo’s love letters. “I know that she came across one or two letters or cards, fairly sort of harmless things, where Jan did sign ‘Jan Ricardo’ with this great, wonderful R,” her son, Kits Browning, told The Telegraph in 2013. Rebecca, too, signed her name with a glamorous R, which recurs throughout du Maurier’s novel—appearing on notebooks, letterhead, and handkerchiefs.

“Harmless” as they might have appeared, Ricardo’s letters sparked a deep and long-lasting insecurity in du Maurier. She found and hid photographs of Ricardo, writes Tatiana de Rosnay in the du Maurier biography Manderley Forever. Her curiosity turned to jealousy, then fixation. Though there’s no evidence Browning and Ricardo ever met in person again, du Maurier remained convinced her husband was still attracted to his gorgeous old flame—or worse, that he was still in love with her. When du Maurier would later defend Rebecca in court, she dreaded any questions about her behavior in regard to Ricardo: “I was so terrified of that coming up in the box and making publicity that I was nearly off my rocker,” she later said, according to de Rosnay.

The author gathered every detail about Ricardo she could find via society gossip and newspaper stories, even after Rebecca was published. She learned from the London Times that Ricardo had married another military man; like du Maurier, Ricardo soon welcomed a daughter. Oddly, Ricardo’s wedding announcement featured a guest list that included du Maurier’s elder sister, Angela—the likely source of juicy gossip that Ricardo had read Rebecca and recognized herself as its inspiration.

Du Maurier’s and Ricardo’s parallel lives might have continued if, in August 1944, du Maurier’s sleuthing hadn’t uncovered another Times notice. This one, de Rosnay writes, had grim news: Jan Ricardo, a seemingly happy young wife and mother, had died after throwing herself in front of a train.

Rebecca was an instant hit. Critics almost unanimously praised the gothic romance; it was hailed as “a grand story” by the Sunday Times and “magnificent” by The Observer. But a few negative reviews raised the same criticisms: The text was a bit too familiar.

Especially in America, the book was (and often still is) considered to be a crude knock-off of Jane Eyre, and du Maurier an opportunistic appropriator of “real” literature—swapping her unnamed narrator in for humble Jane and the seductive Rebecca for Mr. Rochester’s attic-imprisoned first wife, Bertha Mason. The three du Maurier sisters so obviously idolized the Brontës—Daphne named them often when interviewers asked about her favorite authors—that some critics thought she’d stoop as low as plagiarism. The accusations followed du Maurier her whole life and beyond; in her 1992 essay collection, Expletives Deleted, writer Angela Carter declared that Rebecca had “shamelessly reduplicated the plot” of Jane Eyre.

The Brontës weren’t around to sue, but contemporary novelists who also saw similarities between their work and Rebecca were. First was Carolina Nabuco, the Brazililan writer of A Sucessora. In 1941 she publicly accused du Maurier of stealing her story, which centered on a dead first wife (this time named Alice). The New York Times Book Review wrote a lengthy, scathing piece headlined “The Long Arm of Literary Coincidence,” excoriating du Maurier: “So numerous are the parallels,” it declared, “that one may find them on almost each page.”

Doubleday squashed any legal action, and the story probably would have gone away if du Maurier could have resisted a clap-back. But in a strongly worded letter to the editor, du Maurier denied the claims by reminding the world that “as a matter of fact, another American, also unknown to me, claims I plagiarised her novel.”

That novel was Blind Windows by Edwina MacDonald—who indeed had filed charges that brought du Maurier to America for the first time to defend Rebecca. Much like A Sucessora—and Jane Eyre too—the work features a young narrator who hastily marries a wealthy older man, moves into his manor filled with servants, and becomes increasingly jealous of his first wife (here, Della). But since no one could prove du Maurier ever read Blind Windows, the case was thrown out of New York court.

4. Daphne du Maurier herself is Rebecca

Angela du Maurier couldn’t have had anything less than a complicated relationship with her superstar younger sister. As children, the three du Maurier daughters were so close they invented their own language. Middle child Daphne, however, was by far their father’s favorite, which he openly acknowledged. He doted endlessly, even obsessively, on Daphne, even writing her a poem quoted by both Forster and de Rosnay: “My very slender one / So feminine and fair, so fresh and sweet / So full of fun and womanly deceit.”

Angela, by contrast, was curvaceous in a way that was unfashionable in the 1920s. She had brown hair and eyes rather than Daphne’s blond waves and baby blues. Angela was three years older, and at the very marriageable age of 27, she called to Daphne to come and see with binoculars the “most attractive man going up and down the harbour,” Daphne would later remember in Myself When Young. The man was Frederick Browning. It was Daphne he proposed to in three months’ time; Angela never married.

Just as Daphne’s first novel hit bookshelves, Angela confessed that she aspired to be a novelist too, and had been secretly (and unsuccessfully) shopping her own manuscript, The Little Less. Angela du Maurier would eventually publish a dozen books, though her work was widely panned (The Little Less was called “lush mush” and “a literary failure” by the Saturday Review of Books) and so often unfavorably compared to Daphne’s that she cheekily titled her memoir It’s Only the Sister.

Angela’s life in Daphne’s Rebecca-esque shadow was an open secret no one denied, either in life or death: Her 2002 Independent obituary noted “she wasn’t beautiful like Daphne, she wasn’t talented like Daphne,” and “she knew she could not hope to compete.” In fact, Angela’s obituary mentioned her sister by name 17 times.

5. There is no Rebecca

Of the du Maurier sisters’ many secret code words, “Venetian tendencies” meant lesbianism; all three had affairs with women throughout their lifetimes. But while Angela and Jeanne, the youngest sister, accepted their sexualities and lived their lives outwardly and authentically, Daphne could not. She shared “her father’s oft-expressed repugnance for homosexuals,” notes de Rosnay. Still, Daphne was often attracted to—and obsessed with—women.

In 1947 du Maurier traveled to America to defend Rebecca in court. Also aboard the ship was Ellen Doubleday, wife of du Maurier’s American publisher. In Daphne du Maurier: A Daughter’s Memoir, Leng recalls their meeting: Her mother “was struck at once by the dark-haired vision before her.” Ellen was du Maurier’s usual type: dark hair, slim and trim, a commanding presence before household servants. Once du Maurier’s shyness subsided—and she could finally speak in front of Doubleday—the writer frequently joked that the ever-impeccable hostess was her “Rebecca.”

For months du Maurier sent Ellen increasingly romantic, albeit unrequited, letters. She wrote in third person, as though she were still Eric Avon: “D. du M. wrote her books, and had young men, and later a husband…and life was sometimes lovely and sometimes rather sad,” one went. There were moments of respite in her correspondence as well: “She opened up the box sometimes, and let the phantom, who was neither girl nor boy but disembodied spirit, dance in the evening when there was no one to see.”

Biographers cannot agree on whether du Maurier was a lesbian, or bisexual, or transgender. Forster and de Rosnay are thoroughly convinced of at least the former, while Leng skirts the issue. It’s likely that du Maurier herself wasn’t sure. The only consensus is that her relationship with women and femininity was complicated, her sexuality and identity unknowable. Perhaps in the end, then, the whole point of Rebecca is that Rebecca isn’t real at all—but an impossible feminine ideal that, like her young narrator, Daphne du Maurier could neither embody nor possess. 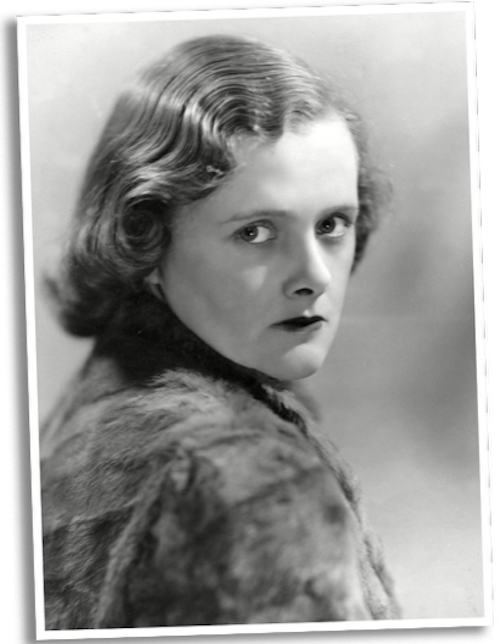