Why You Keep Reading Obituaries for Rosie the Riveter

More than one woman can lay claim to serving as inspiration for the mid-century icon.

In late April, sad news spread through social media: Mary Doyle Keefe, better known as World War II patriot and feminist icon “Rosie the Riveter,” died in Connecticut at age 92. The inspiration for Norman Rockwell’s famed painting, and thereby millions of working women during and after the war effort, was gone forever. The sadness was palpable and condolences were offered, but I couldn’t shake an odd feeling of familiarity. Hadn’t I e-mourned this already?

Turns out I had—sort of. In December 2010, 86-year-old Geraldine Hoff Doyle—you know her in her red and white polka-dot bandanna from the “We Can Do It!” poster—died in Lansing, Michigan. And thirteen years before that, in 1997, another so-called Rosie had died. This time she was Rose Will Monroe, an aircraft factory worker from Pulaski County, Kentucky.

A skim through American National Biography showed that at her inception, Rosie the Riveter was more of a mid-century folklore figure than the singular icon that many of us think of her as today. There were, in short, multiple women who could lay claim to the Rosie crown, and as the Greatest Generation has reached the upward limits of its twilight years, that claim has been laid often enough in the obituary pages. Are any or all of these alleged Rosies legit? Who’s the real Rosie the Riveter—or is Rosie the Riveter real at all?

The first thing contemporary sleuths searching for the one, true Rosie should notice (in case it flew right over your head) is the pun. A riveter was an assembly-line worker who inserted metal bolts into aligned holes, yes, but also one who rivets, commanding awe and attention. A propaganda campaign (today, we’d call it spin) would be imperative in convincing six million women to buck up and get a job to replace men gone overseas (even if the wage gap at the time was significantly worse than today’s).

So in 1941, two years before “Rosie the Riveter” became ubiquitous, the seeds of an American icon were already firmly planted—in Canada. Veronica Foster was not Rosie but “Ronnie the Bren Gun Girl.” The Torontonian was spotted by the Canadian National Film Board and chosen as the star of their publicity campaign. Foster had three brothers in the war, model good looks, and was regularly seen gallivanting about town dancing the jitterbug.

“Factory work is usually no more difficult than housework!” said her popular ad.

The now-famous, and still fantastic, photo of her, machine gun in hand and smoke blowing from pouty lips, popped up in a feature on Canadian women workers on the front of The New York Times in October 1941. (The cigarette was just for photo shoots; Foster, like a lady, didn’t smoke.) It’s very possible that Ronnie, doing double duty as sex symbol and fierce feminist, was the very first Rosie.

Only she wasn’t named Rosie yet, of course. For that, thank Rosalind Palmer Walter, a wealthy Long Island heiress who went from high school to the night shift building fighter airplanes. Walter became inspiration to songwriters Redd Evans and John Jacob Loeb, who penned the surprisingly catchy “Rosie the Riveter” song in 1942. Their peppy lyrics made factory workers giddy: “All the day long, whether rain or shine / She’s a part of the assembly line / She’s making history, working for victory / Rosie the Riveter!”

Perhaps this ditty became Norman Rockwell’s earworm while he painted the name “Rosie” on the lunchbox of his 1943 contribution to the Rosie ideal, this time less glam and girly, more thick and dirty, inhaling a sandwich (very unladylike) and resting her feet on a copy of Mein Kampf (take that, Hitler). Rockwell used his 19-year-old neighbor, telephone operator Doyle Keefe, and paid her $10 for her time.

The now-famous image appeared on the cover of the Saturday Evening Post on May 29, 1943. Just a month later, a female worker and Italian immigrant to New York—named Rose Bonavita, conveniently enough—set a new production record with her partner: 900 drilled holes and 3,300 completed rivets in a Grumman torpedo bomber during a single six-hour shift. President Roosevelt sent her a personal thank-you letter. Another Rosie was made.

On the big screen there was the aforementioned Monroe, a riveter from Michigan who so embodied Rosie that she was chosen to portray the character in promotional films. Monroe became the perfectly manicured face of Rosie, arguably her most famous at the time, until her death in 1997.

Or maybe Rosie’s out there and still going strong? At 95, Elinor Otto, hailing from Long Beach, California, is still making the media rounds as the “Last Rosie the Riveter.” She even appeared on The Ellen DeGeneres Show two years ago. But was she the true Rosie? Otto was a riveter during the war, and was honored by the American Veterans Center for her efforts, and does rock a mop of retro red hair—but otherwise, has no claim to Rosie.

And as for J. Howard Miller’s 1942 “We Can Do It!”, the poster that might not have cited Rosie by name, but that spread her iconography through untold dorm rooms, it was largely unknown until feminists re-appropriated the image in the 1980s. Hoff Doyle, whose face launched a hundred Halloween costumes, recognized herself in the poster in Modern Maturity magazine in 1984.

The photograph—snapped of her at 17 while on break at a metal company in Ann Arbor, where she’d quit in two weeks for a safer job at a soda fountain—became a cover for Smithsonian magazine in 1994 and a commemorative stamp in 1999.

“You’re not supposed to have too much pride, but I can’t help have some in that poster,” Doyle said in 2002. “It’s just sad I didn’t know it was me sooner.”

But is it really? And does it matter? Hoff Doyle’s iteration of Rosie the Riveter, the most famous (albeit arguably least Rosie) of this moment, is currently plastered on mouse pads and coffee cups to inspire modern women, themselves a whole new kind and crop of Rosie the Riveters, no matter who’s playing her.

In that way, they’re all legit Rosies. 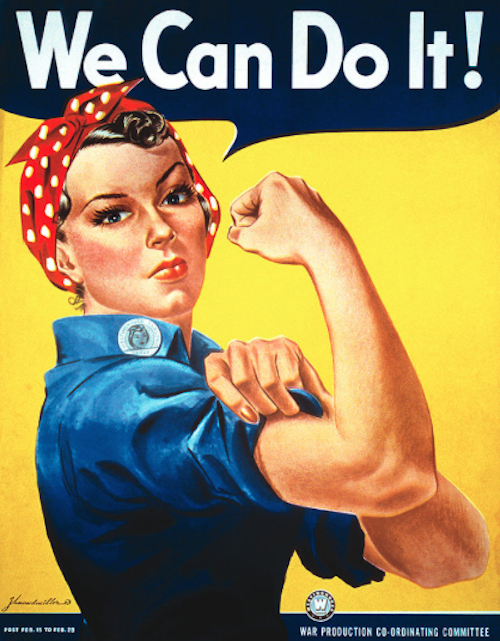