Winning is for the Birds

Move over, Monopoly. Hop on the bus, Battleship.

Just before the pandemic hit, a new board game arrived in hobby stores: Wingspan, a gorgeous tabletop game in vibrant hues with pastel accents. Players carefully nurture their aviaries with worms, cherries and field mice to collect bird cards—with meticulously hand-painted California condors, yellow-billed cuckoos and many others—that then lay eggs to populate the reserve and form an interconnected ecosystem. Competition is low while collaboration is high—the principal goal being robust bird populations for all players—making it almost antithetical to zero-sum games like Risk or Monopoly. Yet the admittedly slow-sounding Wingspan has sold 1.3 million copies and is no longer available at many retailers—you’d be lucky to get your hands on a copy this season.

Wingspan is something of a Cinderella story. Elizabeth Hargrave, a health policy analyst in Maryland, found herself discouraged by the usual board game tropes like trains, outer space and castles. Within her growing circle of gamers, alongside a moratorium on castles, Hargrave began developing and play-testing a game based on one of her passions: birdwatching.

Like birdwatching, playing board games is a quaint hobby that made an unlikely comeback with those looking to fill long hours during COVID lockdowns. Business has been good, says owner John Engel of Mission: Fun & Games in St. Albert, Alta., but Wingspan does better by specifically appealing to new gamers—or those circling back to games 30 years after they last played Yahtzee. “Wingspan is what we call a gateway game—an entry-level game designed specifically for non-gamers who then get hooked and stay with the hobby,” says Engel.

Similar bestsellers include Sagrada, in which players roll colourful dice to create stained-glass windows fit for Barcelona’s Sagrada Família; Parks, in which “hikers” collect “memories” from 45 real-life U.S. National Parks; Azul, based on the Portuguese art of ceramic tile making; and Kanagawa, in which players are disciples of the Japanese Edo period painter Hokusai, collecting “harmony points” to create a perfect landscape. Gateway games are often based on gentler topics than the usual money and war activities. They move slowly but can be played in an hour or two, and are designed to be beautiful so they pop off the shelves for browsers.

Alongside hardcore Dungeons & Dragons-style fanatics, space is being made for more casual gamers. “I grew up in a family that played Scrabble and dominoes all the time,” says marketer Becky Young. When the pandemic hit, she went looking for games to entertain her 10-year-old daughter, who proved to be impressively good at even the more complicated ones, like their newest acquisition, Tiny Towns, which is officially designed for ages 14 and up.

“We play a game most weekends, maybe for an hour or two, but we’re not all-night players,” says Young, who hails from Niagara Falls, Ont., and now lives in Seattle.

Would-be game designers used to have to pitch their ideas to gatekeeping publishers, but not any more. “Kickstarter changed everything for us,” says Young, who just printed a thousand copies of her card game, Rainbow Rabbits. As always, crowdfunding for the masses has pros and cons. “Everyone who had a game idea floating around their head decided that this was the year,” says Young. “The bar is so high now.”

Wingspan took a more traditional path. After a few years spent perfecting the bird-based game, Hargrave pitched and sold her idea to developers at Gen Con, the annual game designers’ convention in Indianapolis. (In lieu of an advance, Hargrave wisely gets paid in royalties.) “That this game that just exploded has a woman designer is so exciting for the rest of us,” says Katia Howatson, a game designer from Compton, Que. Howatson is currently at Gen Con pitching Stamp Society, the working title for a game about her childhood love of collecting stamps, and selling merch to a new cohort of aesthetically minded gamers. “I use board game pieces to make mosaics, take photographs and then print calendars and coffee mugs,” she says. Howatson has even sold Wingspan-inspired coasters.

In the modern field of game design, old standards like Sorry or Trouble probably wouldn’t get made. “Top art has almost become the norm in board games; otherwise it won’t sell,” says Howatson. Beneath that, however, the elements of most board games are so similar that would-be designers can actually purchase a starter kit. “It’s a big old box of stuff—dice, cubes, cards, tokens—plus blank tiles and a dry-erase board,” says Gabe Barrett, founder of the Board Game Design Lab in Honduras. His kit earned more than $72,000 on Kickstarter and has already shipped to more than 1,500 aspiring creators. Somewhere out there, someone is already working on the new Wingspan. 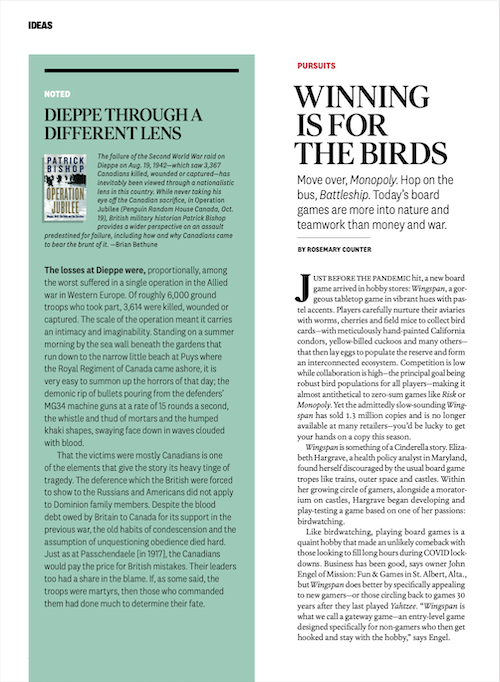 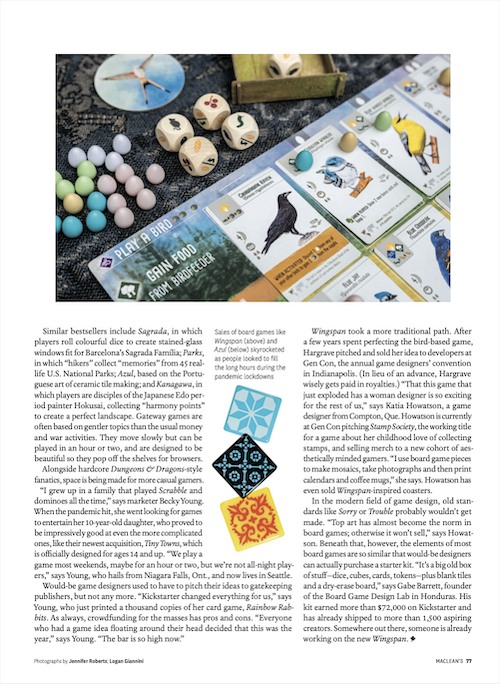