You’re allergic to what?!

Never mind tree pollen; what if you were allergic to the very stuff of life, like water or the sun?

Allergic to cats, dust or pollen? That sucks, of course, but know that many itchy people feel your pain: about one in three Canadians, according to a 2010 survey. You might think your immune system needs strengthening – its job, after all, is to recognize foreign bacteria, fungi and viruses and react accordingly – but, actually, the opposite is true.

“Allergies are an inappropriate immune response to benign things in the environment,” explains Dr. Peter Vadas, head of allergy and clinical immunology at St. Michael’s Hospital in Toronto. “Your body is reacting to something when it really shouldn’t bother.”

An overactive immune system often goes overboard with hay fever or cat dander, but take small comfort that bodies can get far odder than that. “Allergies are very broad, complex and confusing,” admits Dr. Leah Hassall, a naturopathic doctor in Victoria, BC, “but basically you can be allergic to almost anything.” Grab your tissues, here goes.

A true sun allergy is called solar urticaria (urticaria is the fancy name for hives, which 20 percent of us will break out in at some point in our lives). “It’s a rare allergy where people react to ultraviolet light and develop hives,” says Dr. Vadas. “Even ultraviolet light from fluorescent bulbs can trigger it, so these people need to be covered from head to toe – it’s a very disabling condition.” He says a treatment with omalizumab, a biologic drug, can be very effective for this and other forms of hives. Much more common, especially for women, is polymorphous light eruption (PMLE), or your regular old heat rash. Sun-exposed skin goes itchy, prickly and red (or pink) for many of us and often on the first few days of vacation down south. It’s not dangerous; it’s just a nuisance.

Remember being asked at every dentist appointment if you were allergic to latex? That’s because, not long ago, latex allergies were so prevalent, they bordered on common. “We had tons of powdered latex products and way more latex floating around the air,” says Dr. Lori Connors, an allergist and immunologist based in Halifax. Gloved healthcare workers were at particular risk, and symptoms ranged from mild to localized to full-on anaphylaxis (a rapid-onset, potentially fatal reaction that requires a visit to the emergency room pronto). Much rarer now, people with latex allergies (one to six percent of the population) react to a protein in the rubber and experi- ence immediate symptoms, like hives, swelling and rhinitis (this is a concern for anaphylaxis), or delayed symptoms, like runny nose, itching, scratchy throat and watery eyes. Condom users get all that unpleasantness in vaginal rash form, so they need to switch to lambskin. Fun fact: Those with latex allergies tend to be allergic to kiwi fruit, chestnuts, bananas and avocados because they’re all from the same plant family, explains Dr. Connors.

If you think a latex allergy might squash your sex life, prepare yourself: “It’s rare, of course, but semen can certainly cause an allergic reaction and even anaphylaxis,” says Dr. Connors. Seminal plasma hypersensitivity (usually an allergic reaction to a protein in semen rather than sperm itself) is mainly seen in young women, but an allergic antibody to your partner’s semen could develop over time. In this case, unprotected intercourse can cause redness, irritation, itching, swelling (ouch!) and anaphylaxis, and there are even super-rare cases where a reaction is actually a food allergy in disguise (“like where a boyfriend eats peanuts and his girlfriend reacts,” says Dr. Connors). Luckily, a condom can fix this problem tonight. And some more good news here: Assuming that you’re not avoiding sexual contact altogether, a semen allergy will not cause infertility. “If you’re trying for a baby, you might have to try a desensitization process,” she says. (It’s neither as sexy nor as unsexy as you might think!)

Anyone with a healthy accessory habit knows that some jewellery – especially the cheap, hastily acquired, knock-off variety – can lead to an unsightly, often green rash that screams “fake.” “That’s a chemical reaction,” says Dr. Hassall, “specifically an oxidization of metal alloys.” But even expensive jewellery can oxidize. The culprit is often copper, but this oxidization isn’t dangerous – mostly just annoying (and not so pretty). Nickel is a common alloy that causes a contact allergy, leading to itchy red skin for the 15 to 20 percent of individuals who are affected, according to Dr. Hassall. But jewellery-clad women aren’t the only sufferers here. “I’ve seen many men with an unexplainable rash near their belly buttons and it’s actually the nickel in their belt buckles,” says Dr. Hassall. Ditto for a suspicious red rash on a man’s upper thigh – the pocket where he stores his loose change, of course. “There seems to be less of a chance of a contact allergy to jewellery made of platinum and stainless steel,” says Dr. Hassall.

Hoping you might have this one? Nice try, but probably not. A post-workout rash (called cholinergic urticaria, or hives caused by sweating) is very normal and no excuse to quit the gym. A much bigger worry is exercise-induced anaphylaxis, but most of us shouldn’t worry. “This doesn’t tend to happen to someone who goes for a gentle walk,” explains Dr. Connors. “It’s more likely to be experienced by high-level athletes or people training for marathons.” Those with food-dependent anaphylaxis might have the same reaction – if and only if they’ve ingested a specific food like wheat, shellfish or celery. “Exercise without that food and nothing happens,” says Dr. Vadas. “Eat that food without exercise and nothing happens. It’s the combination that does it.”

A common allergy question: Can you really be allergic to water? A not-so-satisfying answer: kind of. Aquagenic urticaria is acute hives triggered by exposure to water, though doctors believe that it’s actually bacterial proteins on the skin that give rise to hives when they get wet. There’s also a separate condition called cold-induced urticaria – it’s a reaction to the temperature of the water rather than the water itself. Both hot and cold are possible, says Dr. Vadas, but cold-induced urticaria is much more severe – and not because of the hives. “If you dive into ice-cold water, the blood vessels in the skin become porous and leaky, fluid escapes within the blood vessels into surrounding tissue and blood pressure falls,” he says. If you happen to fall through ice, for example, this could be life-threatening. “People lose consciousness and can die by drowning,” he says.

Dermatographism ( “writing on the skin” in Latin) is a reaction to almost nothing at all if you can believe it. “You’re not reacting to an antigen,” says Dr. Hassall. “It’s just histamine released due to the pressure of touch.” For between four and five percent of the American population, a nail traced along their arm leaves a line-shaped welt there just a few minutes later. (The mark should diminish in half an hour without treatment.) Even the lightest scratch can leave a mark, but it’s nothing more than a nuisance for some. “For others, it can actually be kind of beautiful,” says Dr. Connors. “People can write whole poems on their legs.” You can find at-home remedies online for this, plus some supportive new e-friends who have it too. 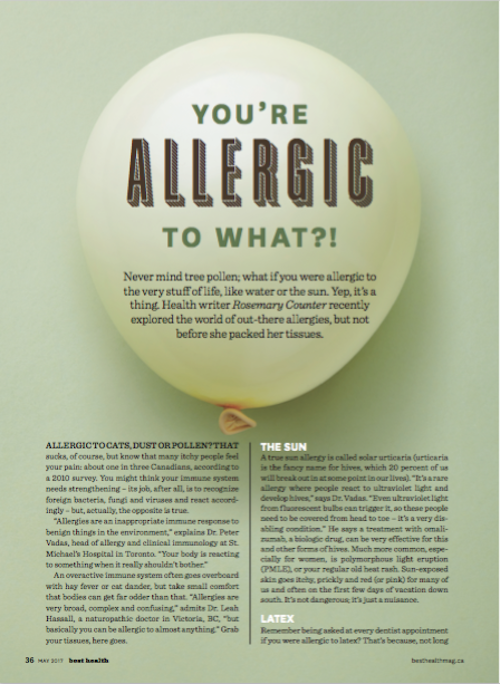 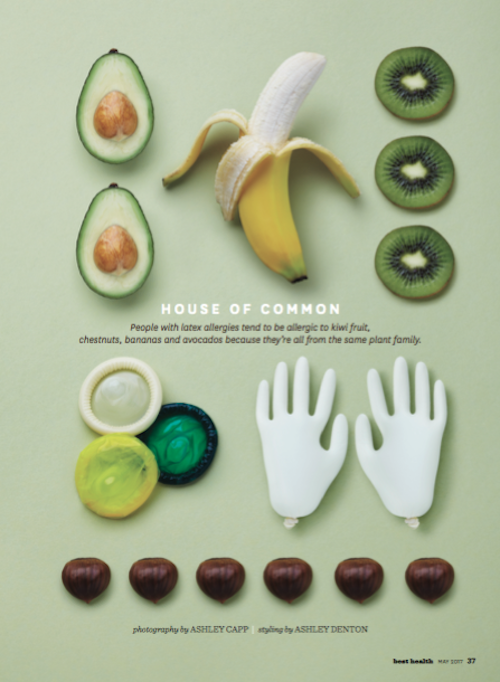 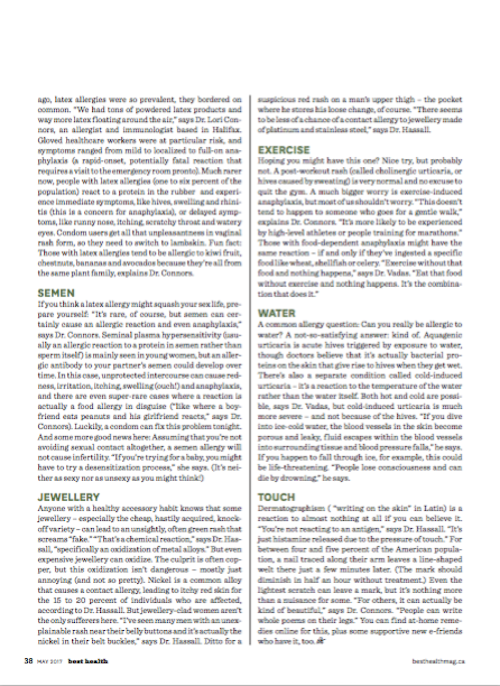