Student Profiles: the farmer, the adventurer, the linebacker

Farming isn’t the first thing that comes to mind when most cottagers think of Ontario’s rocky and rugged Muskoka region. “It’s not an obvious industry, nor hugely populated, but that’s how Muskoka got started,” says Wendy Hogarth of Johnston’s Cranberry Marsh in Bala, Ont. The Johnston in the name of her farm is Orville Johnston, whose son Murray is Hogarth’s husband of 31 years. Together, with the help of four strapping sons, they still run the family farm: 27 cultivated acres of cranberries on 350 acres of land.

Having studied recreation and tourism at University of Waterloo, Hogarth promptly began putting her own entrepreneurial stamp on the business. “In order to remain viable, we’ve always had to be creative and diversify, so that’s where the agritourism idea came in,” says Hogarth. They began by inviting people to buy fresh cranberries, opened a retail gift shop, offered trails and tours, and launched Muskoka Lakes Winery in 2000. Their initial Cranberry Wine vintage sold out in 16 days.

Her green-thumbed husband handles the agriculture, and Hogarth manages Johnston’s product. “Business is the language I speak, and though I certainly once toyed with the idea of an MBA, I wasn’t interested, because they seemed so Bay-Street-focused,” she says, content with rural life in and around Bala.

Intent to stay local, a lucky Facebook click led Hogarth to the University of Guelph’s distance MBA in food and agribusiness management. Last May—three decades after completing her BA, and with teacher’s college, sommelier training and a creative writing program in between—Hogarth went back to school again. “It’s designed so I can keep working,” she says, “which is perfect for lifelong learners.”

“From a skier’s perspective, this is just as good as it gets,” says Paul Norrie, president of Mica Heliskiing in Revelstoke, B.C., explaining the luxury ski tours he leads. Here’s how it works: Norrie’s team meets the clientele—mostly business-savvy professionals from as far as Russia and Dubai—at the airport and transports them to an upscale lodge perched on the western slope of the Rockies. Between luxury accommodations and gourmet meals, skiers are transported via helicopter as high as Mother Nature will allow—almost 11,000 feet on a blue-sky day—to enjoy hour-long runs with spectacular views. “With a half-million acres of terrain and only 16 people skiing virgin powder, there’s just nothing comparable,” he says.

Norrie, who studied geography and physical education at the University of Alberta, first landed at Mica’s sister company, Island Lake Lodge, as a mountain guide in 1998. Later, while living in Banff, Norrie completed a six-year international certification with the Association of Canadian Mountain Guides. He was named Mica’s president in 2005 (though he’s still an active mountain guide, he notes), but felt he was missing some crucial knowledge. “I reached a point where I had formal training as a mountain guide, but no formal training in business to move me to the next step,” he says.

And so Norrie asked his wife a big question: “What if I went back to school?” With a then two-year-old, and another child on the way, an MBA from Alberta’s Athabasca University—which mixes in-residence and online components—would be a delicate balancing act between the books and the slopes. “Three years later, many, many, many papers and study weekends later, it’s come to an end and been excellent,” he says. Business is booming—Mica won Skiing Magazine’s 2011 pick for Best Heliskiing—and Norrie’s got an usual claim to fame: “I’m one of few mountain guides who decided to go back and get their master’s in business, that’s for sure.”

While the rest of the team laughed and played cards aboard their chartered flights, CFL linebacker Javier Glatt, now 31, had his head in the books. “I’d be like, ‘Keep it down out there! I’m trying to learn cash flow!’” he says.

After eight years on the field, seven of those with the B.C. Lions, where in 2006 he won a Grey Cup—and all the injuries that go with it, including a torn ACL, broken leg, dislocated ankle, torn pectoral muscle—Calgary-born Glatt was ready for a change. “I started growing as a person and becoming interested in things that weren’t football,” he says. “Then I looked around at so many of my ex-teammates and current teammates who had basically zero plans for transitioning out of the sport. So many guys struggle with that, and I vowed not to let it happen to me.”

With an undergrad in sociology from UBC, and an admittedly not-so-stellar record as a student, Glatt began a graduate diploma in business administration from the Segal Graduate School of Business at Simon Fraser University. This time around, learning came more naturally. “School at 30 is a little different than school at 20—you’re actually interested, you love learning, you have a new perspective,” he says. Though he didn’t think so at the time, it turns out football left Glatt with some choice business skills: a strong work ethic, goalsetting, accountability and—perhaps most important—leadership. “Professional football is a breeding ground for leaders, and those leadership skills can be quite valuable in the business world,” he explains.

Glatt placed very well in the program, transferred into a full-time MBA program, and graduated with a gig at Goldcorp in Vancouver. His newest challenge, he says, is balancing a full-time job with his wife and young daughter, who just turned one. “I’ve been used to a lifestyle where you finish at two o’clock every day and get six months off, so next I’m learning about time management.” 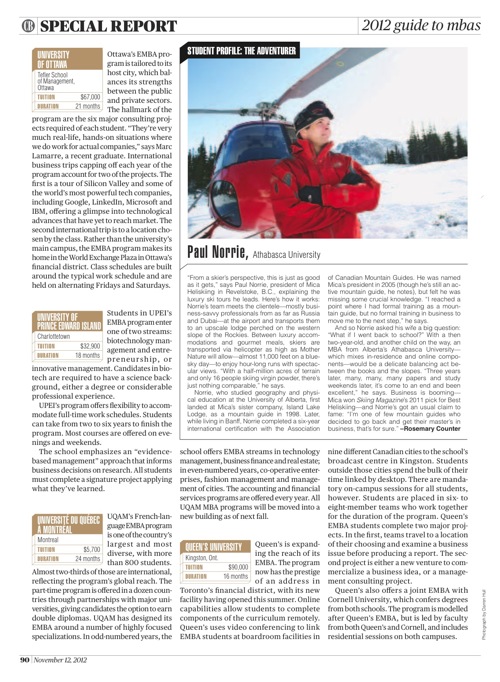 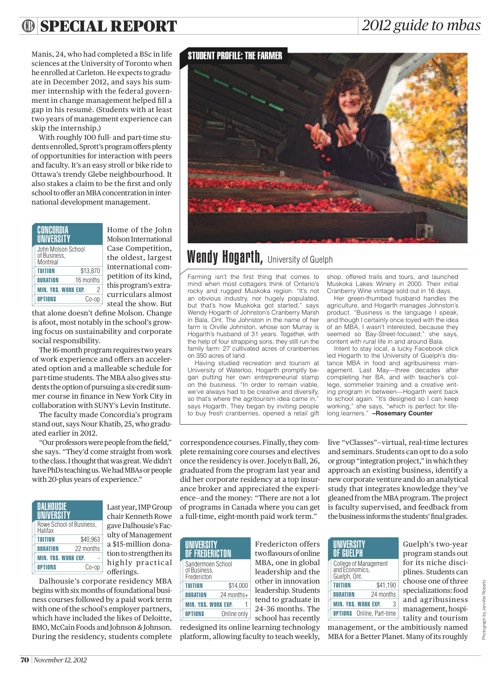 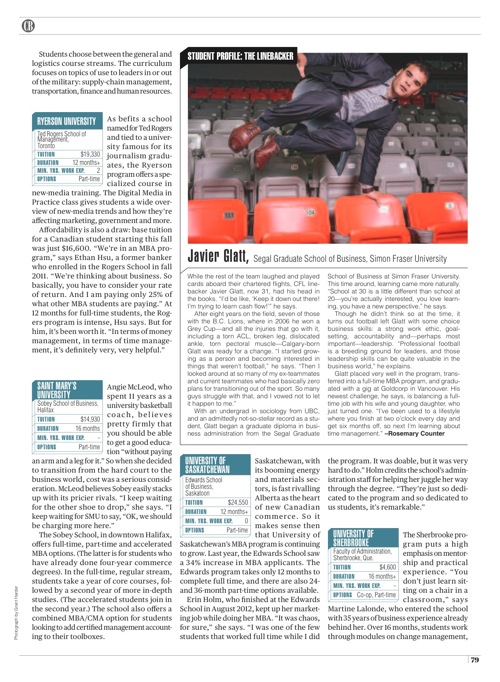