A public look at private parts

In God’s Doodle, the penis is the thing

Call it whatever you want: a friendly John, Willy or Dick; an efficient euphemism like rod or staff; crude slang – please don’t make me go there; or a too-cute pecker, woody or whistle. Old English favours cods, swords and stones; Shakespeare digs not-so-subtle lancets, pistols and poleaxes; and animal metaphors, especially snakes and eels, transcend all lands and languages.

You guessed it! It’s everything you wanted to know and lots more you didn’t in Tom Hickman’s God’s Doodle: The Life and Times of the Penis. (If there were ever a time to leave an embarrassing dust jacket at home, this is it.)

Whether “long, short, thin, stumpy, straight, bulbous … swerved left or right or up or down, circumcised or not, smooth or as wrinkled as a Shar-Pei pup,” Hickman writes, every penis is a special snowflake. Each even has its own personality; which is why practitioners of phallomancy in India and Tibet read penises like fortune tellers read palms.

Their only common ground? “It is a truth universally acknowledged that a man in possession of a penis will do some of his thinking with it,” Hickman – a dry-humoured Brit, which does take the edge off things – says in a book that tirelessly proves his very point. Sophocles said that to have a penis is to be “chained to a madman;” Leonardo da Vinci noted that “it remains obstinate and follows its own course.” Playwright Joe Orton: “A man is nothing more than a life support for his penis.”

If you never got around to late-night Googling how great men felt about their nether regions, or thought that perhaps great men might exercise some gentlemanly restraint, God’s Doodle is here to squash your admiration for great men. Not shockingly in the least, quips fall into two camps: self-deprecating insults of admitted tiny ticklers and self-aggrandizing brags of monster members. (This reviewer still can’t decide which is grosser.)

On team less-is-more is Salvador Dali, cursed with something “small, pitiful and soft.” Woody Allen disagreed with Freud by insisting men too – especially the famously neurotic director himself – suffer from penis envy. Enrique Iglesias half-joked he wanted to launch a line of extra-small condoms (the best jokes, of course, are always half-true). Enjoying the opposite problem, however, is crooner Frank Sinatra – so large, allegedly, that he required custom-made underpants – and comedian Milton Berle. “What a shame,” Betty Grable purred, “it’s never the handsome ones.”

On the enduring and ever-interesting question of average size, and the obvious follow-up of whether size even matters (short answer: officially, no; unofficially, oh yes), Hickman keeps a keen eye for context. Kinsey found the average fellow is 6.2 inches, Masters and Johnson measured them slightly smaller again, and modern men, according to a 2002 Durex survey, are suspiciously better endowed than all generations before them. Hickman explains this mystery as “lies, damned lies, and self-measurements.”

But like anything, it’s all relative. The human penis, Hickman explains, “is four times bigger than biologically necessary.” Twice as large as chimpanzees, with whom we share 98 per cent of our DNA, possibly evolved to satisfy the human female’s preference for face-to-face sex and other creative sexual positions. But maybe not, Hickman adds, as the humbly endowed bonobo does it swinging from trees.

Hickman’s got smooth moves, from ancient history to modern science to Hollywood pillow talk, touching on scandalous sex secrets from all corners of the globe, all while avoiding delving too deeply into surrounding gender politics – a strategy both wise and lazy, since assuming all “penis-possessors” are “thinking with his other head” is offensive to both sexes. But if readers don’t overthink it, God’s Doodle is like a well-delivered dirty joke: risqué, full of guilty pleasure, and only half-true. 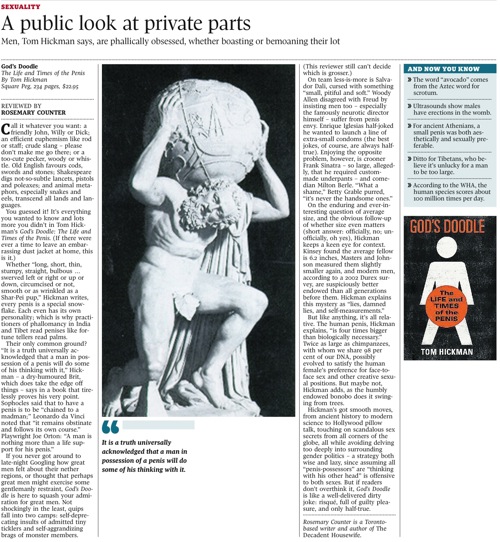