This Time, Louise Penny Thinks She Got It Right

Crime was deeply human, Gamache knew. The cause and the effect. And the only way he knew to catch a criminal was to connect with the human beings involved,” wrote Louise Penny in her 2005 book, Still Life. It was the first time—after he spent several years existing only in Penny’s imagination—that readers finally met Chief Inspector Armand Gamache of the Sûreté du Québec (that is, the French Canadian Police). Seventeen years and a series of 18 books later, the equally gentle and gruff Chief Inspector Gamache has earned impressive cred with mystery lovers, even beating out Sherlock Holmes and Hercule Poirot in last year’s Washington Post ranking of the most beloved fictional detectives.

But nobody loves the character more than Penny herself, as Chief Inspector Gamache is based on her late husband. No wonder, then, that she wasn’t quick or keen to give up (some) creative control of the character to Left Bank, producer of The Crown. After all, she’d signed off on a TV Gamache once before, an experience that left her vowing she’d never ever do so again. On the eve of the debut of Three Pines, Amazon Prime’s new series based on Penny’s books, starring Alfred Molina in the lead role, Vanity Fair talks to the best-selling author about Gamache’s bumpy road to television, how and why she changed her mind and tried again, whether American viewers will tune in to the (very!) Canadian show, and why a small town is just as interesting a place to solve a murder as a city.

Vanity Fair: Congrats on the show! I watched the first two episodes last night but resisted binge-watching them all because I didn’t want to know the ending before we chatted.

Really? Isn’t this the second time Gamache landed on the screen?

It is, and he did, and thank you for bringing that up! It wasn’t my favorite experience, to be honest, and not because of the actors or any one thing in particular, it just wasn’t, I felt, a true reflection of the spirit of the books. Afterwards, every time anybody asked [to make a show], I said no. A hard no. I don’t have much to gain but lots to lose. My characters are very important to me and every decision I made was personal.

Why did you finally change your mind?

Well, it took a long time. I met with Andy Harries, the head of Left Bank, for about two years. I wanted to see how many free lunches I could get. We just talked and talked and talked, because it’s really about trust. It’s like jumping off a cliff, so I needed as many assurances as possible. I spoke to my writer friends, Anne Cleeves and Diana Gabaldon, both who’ve had their books adapted. Finally, my agent said, “Accept or don’t, but if you’re ever going to accept, do you think you’ll ever find a better fit than Left Bank?” I pondered and decided, just because the quality of their work, not just The Crown, but wow, The Crown.

I just watched the Tampongate episode. I mean, if they can make that good…

Oh, that’s next on my list! They do such great work, though I did make it clear to Andy, even though I didn’t have to because he already knew, that the show had to be set in Canada. These are Canadian books set in Canada, not in Kent or Vermont. He said absolutely.

As a Canadian, it’s so nice to see Canada being itself, in French, with curling. Do you think American viewers will go for it?

I know they will, and let me tell you why. It took me years to find an agent and a publisher, and part of the problem, [which] I heard over and over again, was that no one would be interested in a crime novel set in Canada. I knew that wasn’t true, but I couldn’t marshal arguments. Americans are very open to my books, which frankly sell better in the United States than anywhere else, including Canada. People like good stories wherever they are.

How much if any say did you get in casting? Did you get to pick who played Gamache?

We talked about that for a long, long time. Television often cheats, they go for someone younger or some Hollywood pretty boy. Gamache has so much more happening, so we needed someone with the gravitas to be funny, warm, vulnerable, strong, kind—all at the same time. It was Andy Hallies who called me up and said, “Alfred Molina.” Everything changed right then. I said we have to get him.

He must be brave to step into a role that the world loves so much, but that’s so important to you especially because he’s based on your husband.

At some point after all that, I knew I had to let my Gamache go and let Alfred have him. I visited the set, briefly. He called me “Mrs. Penny.”

It could be worse? He could have called you “Ma’am.”

Or “Mr. Penny,” hah! Afterwards I wrote to Alfred to say, as you know, Gamache was inspired by my late husband who I loved deeply and still do. [My husband] Michael’s favorite saying was “surprised by joy,” which I put in the book sometimes. So I told Alfred that when I watched him be Gamache, I was surprised by joy. He wrote me the nicest letter back. He’s just a lovely man.

Gamache is kind and astute, but hard and gruff sometimes too, in the service of solving the case. What kind of research did you do to get into the character?

I was a journalist for many years, so I already knew a lot about procedures, but I wanted to look at another more human aspect than that. What makes him interesting, and probably more of a real detective, is that he solves crimes by connecting with people. I figure the more screwed up I am, the better writer I’m going to be, because it gives me insight into human failings.

Not that you’re a supervillain or anything, but your victim is a famous writer in a small town…

Ha! Are you saying she’s like me? She’s awful!

No, don’t hang up on me, I just thought maybe you were having a little fun!

Well, the show is based on my second Gamache book, so when I wrote it I was by no means famous. My first victim from Still Life was a very likable character, so the question becomes, why would someone kill someone so beloved? By the next book, I wanted a character that everyone wanted to kill. The whole town wants to kill her. This show is based on that novel, not the first one, as we tried that already a few years ago.

Is there something different about your mindset then and now that you were able to give up your character?

There isn’t, actually, and I kinda didn’t. There were times there were tears, literal tears I was crying because producers felt one way and I felt another. There are some areas that they gave in to me, and other areas where they were right and I had to give up and choose my battles.

Can you give me an example of a battle you lost?

Sure, yes, I’ve been open and honest about this. The village is much darker than my village, the villagers aren’t open or welcoming. Everyone has dark secrets. My village is a sanctuary and my characters are a lot more accepting. That’s my Three Pines, but the show goes another route. That’s okay too, and I accept it.

You live in a small town in Quebec’s Eastern Townships, and you set your books there, so tell me about depicting small-town life. I think television tends to depict people and their lives as simple compared to people in the city.

Like any city, a small town has people who are likable and unlikable. It makes me upset when people read my books and decide they’re village cozies just because they’re set in a village. It’s not like people get moronic the further they get from the city limits. I’m careful to reflect the idea of diversity and different outlooks, even in small towns. Smart, interesting, artistic people live in small towns too. The Eastern Townships, per capita, has among the largest representation of artists in Canada.

Are you hard at work at book 19 already?

I was working away at it at 4 a.m. this morning. I flew in last night from London, so I’m on London time. I normally write early in the morning, but not that early. There was nothing to do on the plane, so I just wrote notes and jotted down some probably awful ideas for my book.

Exactly that easy, yes. You just write a bit on the plane and by the time you land, you’ve got it. The agents are all lined up when you get there, million-dollar checks in hand. 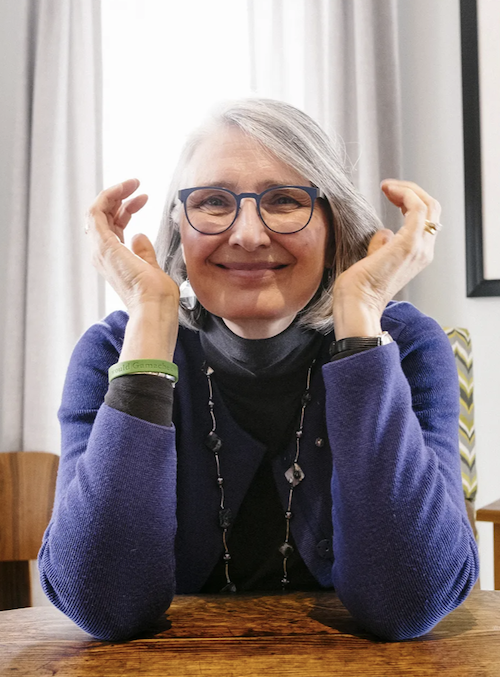