A real chip off the old cracker

The hybrid snack is marketed as healthy, but its calories are empty

While a rumpled man in his pajamas sneaks an afternoon snack, a young woman surprises him in the kitchen. “Man, I really didn’t think you’d like those,” she says, “because they’re crackers and they’re good for you.” The man shovels handfuls into his mouth, saying, “They taste like chips.”

This so-called hybrid of chips and crackers, which Pepperidge Farm dubs “the best of both snacks,” is appearing on shelves just in time for the holiday season. Though pegged as an innovative new product, Cracker Chips already has stiff competition: Special K Cracker Chips launched in May; Kashi’s Original 7 Grain Snack Crackers came out last year; and Christie’s Crispers, the grandfather of the group after 21 years on supermarket shelves, is still going strong.

The difference is that Crispers were never marketed as a healthy snack. “Once you do the serving-size conversions, Crispers are about the same as chips in terms of calories and fat,” explains Maria Thomas, a registered dietitian and nutritionist for Vancouver’s Urban Nutrition.

The new cracker chips do meet many people’s criteria for healthy snacks because, while high in carbohydrates, they’re low in calories, fat, sugar and sodium. “When you look at the nutrition label, they’re relatively low in everything, including nutrients,” says Thomas. They have virtually no vitamins, negligible iron and protein, and little fibre. Empty calories like these can be a portion controller’s nightmare. “As soon as a product is touted as healthy, people tend to overindulge,” she says.

For someone who wants to satisfy a salt craving, cracker chips—available in flavours like barbecue and cheddar—might hit the spot. But selling snack foods to health nuts isn’t easy.

The answer may lie in where they’re found on grocery shelves. Cracker chips are sold in the crackers aisle, not with the chips. More importantly, explains Jordan LeBel, a food and marketing professor at Concordia University in Montreal, they have crossed a perceived divide between junk food and nutrition.

“Categorization isn’t just a marketing thing, it’s a psychological thing,” he says. Our purchases are linked to our identity, which is increasingly concerned with living well.

Since women, pegged by marketers as more health-conscious than men, are the primary grocery shoppers in about 70 per cent of households, it’s no surprise they are targeted in ads. If, as the commercial suggests, women like crackers whereas men prefer chips, then appealing to women’s perceptions of health and men’s expectations of taste would be a marketing dream come true. “The notion of crossover categories is one that marketers have explored time and time again,” says LeBel, citing drinkable yogourt and roller shoes as success stories. “Exploring a crossover category, or creating one, comes with risks and challenges. You need a big brand muscle to inform and educate the customer, and make sure they can reconcile it within their own categorization scheme. Basically, is it healthy or is it not?”

In this case, healthy is a relative term. “They’re lower in fat than chips, and lower in carbs than cookies,” says Natasha Turner, a Toronto naturopathic doctor and author of The Carb Sensitivity Program. But cracker chips are loaded with what Turner calls “weird, unpronounceable ingredients” like hydrogenated soybean oil, glucose-fructose and sodium metabisulphite. Even Turner’s healthiest pick—the Kashi snack crackers—contain evaporated cane juice crystals, which is code for sugar.

A better choice is the rice chip. “They don’t have vitamins or anything—some are just rice, sunflower oil and sea salt—but you can eat them with other things,” says Turner, who suggests pairing them with lean protein like ricotta cheese, bean dip or hummus. After all, a well-rounded snack combines both carbs and protein.

“I’m struggling with their use of the word ‘healthy,’ ” Thomas says about cracker chips. “If you’re really looking for a healthy snack, have an apple.” 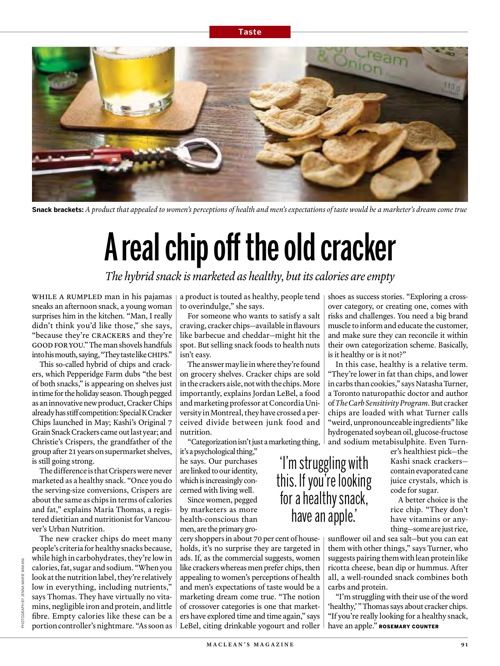