A reason to smile

I finally got what my high school self wouldn’t: braces. Ugh.

Though I can’t remember ever having been so cruel, my brother tells me that the day his then-teenage self came home with a mouthful of metal, I screamed. Not just a little gasp: a loud shriek of utter horror. He recalls the event all too clearly, and spent his braces years sad, self-conscious and refusing to eat in public.

But a decade and a half later, his teeth were straight and lovely, while I was the one with bummer dental news. Don’t get me wrong – I was no star feature in the Big Book of British Smiles. In fact, most everyone had no idea what I was complaining about. But after years of increased sensitivity about my smile – too gummy, too pointy, too crowded – I was sick of the forced Mona Lisa smile I performed in every photograph. I wanted to smile without thinking about my smile. I wanted a smile that made me want to smile more.

So no more stalling, whatever people thought (especially me). It was payback time for my 12-year-old self. Now pushing 30, I got what my high school self wouldn’t dare to: braces. Ugh.

Luckily for me, there have been big changes in orthodontics since the scream-worthy sets of the late ’80s: namely, Invisaligns, the trendy brand for those of us too vain for traditional braces (like me and Justin Bieber). They promise to be comfortable, removable and, most important, invisible.

So I took a $5,500 risk – not covered by insurance or obligated parents – and wrote my deposit cheque. Six weeks later, my first set arrived. But, like most things that are too good to be true, reality quickly set in. As the dentist fitted my alignment set (one…of 38) I was already convinced I should spit them out and forget the whole deal. What was worse than the pain, for me, was that they felt less unnoticeable and more like a hockey mouth guard. I could take a cross-check, but couldn’t stop the tears from flooding my eyes.

Everybody feels like this, my dentist assured me. You can’t even see anything, exclaimed the perky assistants. (“Cauth you thee theth every day” was my lispy retort.) I left in a gloomy thundercloud, past all the smug brace-faced children in the waiting room. They could don a mouthful of colourful elastics every day amid schoolyard taunts, and I couldn’t rock my Invisaligns?
So I tried to think relatively.

I never completely shed my insecurities – who does? – but I eventually realized that no one in the gym was even looking at me. The convenience-store clerk was probably more aware of his eye patch than my retainer. When I finally showed my brother, he just shrugged. Turns out, no matter how old you are, braces are a way bigger deal when they’re yours.

And 19 months later (unlike in childhood, time flies when you’re an adult), my teeth are straight and symmetrical. Again, most people don’t even notice, but I sure do. I’m strutting about with a new dash of self-confidence – a little later than most, but it’s still a great reason to smile. 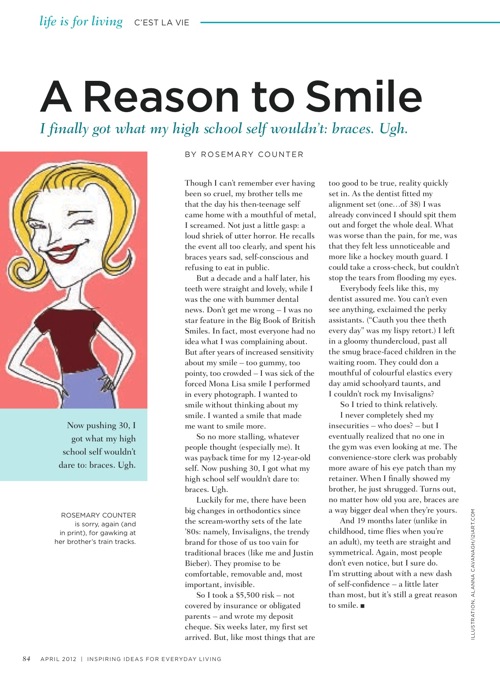