Inside a campaign to boost organ donations in Scarborough

Before they join the long line to renew their driver’s licences or health cards, visitors to ServiceOntario at Scarborough’s Cedarbrae Mall must pass a makeshift booth of volunteers requesting an unlikely donation: their organs. Mohan Bissoondial, a 78-year-old double cornea transplant recipient, begins with a friendly greeting that’s usually reciprocated. Then the patron’s eyes drift to a table crammed with pamphlets with titles such as “Deceased organ donation” and “What can be donated?” and “Kidney disease: Am I at risk?”

In most cases, the visitors’ expressions grow uncomfortable, mortality being the last thing they want to consider over their lunch break. But that’s kind of the point. Though nine in 10 Canadians say they support organ donation, fewer than one in ﬁve has registered—a contradiction that applies across Canada but was especially true in Scarborough, where, back in 2012, donation rates were a dismal nine per cent. So that year, Bissoondial formed the Scarborough Gift of Life Association—a tight-knit group of fewer than a dozen organ recipients and their spouses, who squat in this spot twice a month hoping to demystify donation to the point that people will check the donor consent boxes when they renew their IDs.

They do so with permission from this Service­Ontario outlet’s manager, Kelly Young, and while they hear from their share of what Young calls “negative Nellies,” no one has complained about the campaign—the only one of its kind in the province. (Bissoondial’s group does not collect names; Young granted Maclean’s access on the condition that we not disturb the clientele.)

Their pitch is frank, if a little morbid. Living donors can give only livers and kidneys. After death, the heart, eyes, bones, lungs, skin and about 75 other tissues are potentially useable. (The brain, for those wondering, is not—yet.) Age, sexual orientation or medical conditions don’t automatically preclude anyone from donating. Neither does religion, though many people cite it as the reason they refuse.

The recipients also engage in a certain amount of myth-busting. Donors receive the same quality of care and life-saving efforts as any patient; no one is eyeballing a donor’s organs until all measures to keep them alive have failed. For all organs except eyes and tissue, donors must be declared brain dead while on a ventilator—conditions that describe fewer than three per cent of all hospital deaths, meaning Canadians are actually ﬁve times more likely to need a transplant in life than donate one when they’re deceased. And whether you’re a registered donor or not, your living family will be given the ﬁnal call.

In Ontario, this delicate task is given to the Trillium Gift of Life Network. “I meet families right as they’ve been given the worst news,” says Pam Nicholson, a Sudbury-based donation coordinator at the agency who’ll offer condolences, ask about the person who has died and ﬁnally look up the deceased in the registry. Neither a yes nor a blank is deﬁnitive. “Does [a non-answer] mean they chose not to register? Were they just never asked? The conversation with the family then becomes, ‘What would your loved one have wanted?’ ”

Rarely is a registered yes overturned by relatives, and families give consent for unregistered loved ones to become donors about half the time. “People do say no and that’s okay,” says Nicholson, though all nos are not created equal. “A good no is, ‘We talked about this and they said they wouldn’t want to be a donor.’ A bad no is, ‘I don’t know, we’re struggling, we can’t think about this right now.’ ” In transplants, timing can be crucial. To avoid ambiguity, countries like Spain and Belgium use an opt-out system of “presumed consent.” Nova Scotia passed similar legislation, the ﬁrst jurisdiction in North America to do so. To some, this is a no-brainer, but not for all. “I personally don’t believe in presumed consent,” says Lisa Huhn, a kidney recipient and volunteer on the Scarborough Gift of Life Association. “I think people have to really understand and give from their heart.”

This conversation is better held long before a trip to the hospital—at home, say, or school or even the local ribfest, where the Scarborough group recently set up shop. Registrations are great—the group tends to get 150-200 per day—but normalization of the practice matters just as much, and it’s most easily done with a friendly face attached. “I named my new kidney Gerry,” jokes Tom Mitrovski. (Get it? Tom and Gerry?)

Some in Scarborough are charmed by the group’s pitch, some not. Older people seem most dismissive; one gentleman bursts into nervous laughter as he walks away. Younger people tend to accept the pamphlets and read them while in line. Children in particular are fascinated by the table, which features stuffed animals, a squishy toy heart and “Become a transplant surgeon!” games.

Ronnie Gavsie, Trillium’s CEO, believes most people mean to sign up, but procrastinate or simply “don’t want to think about end of life.” Not so long ago, she notes, wear-your-seatbelt campaigns faced similar inertia. She calls the Scarborough group her “army of advocates,” its efforts having bumped the city’s donation rate to 16 per cent. And she looks forward to the province-wide rate hitting 51 per cent—the day, as she puts it, “the majority of us are donors and registered consent is the norm.” 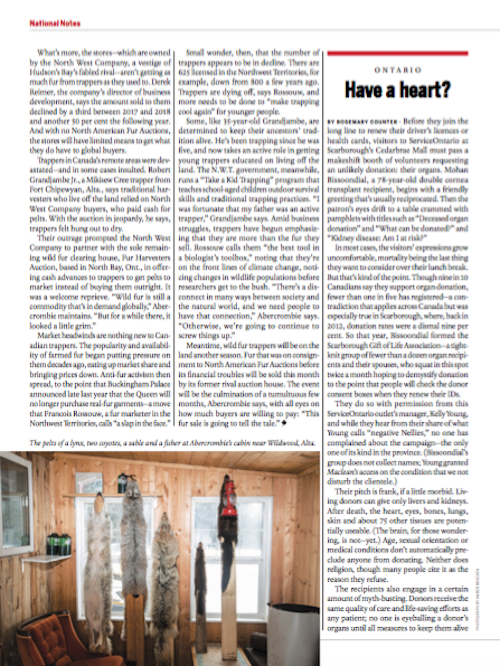 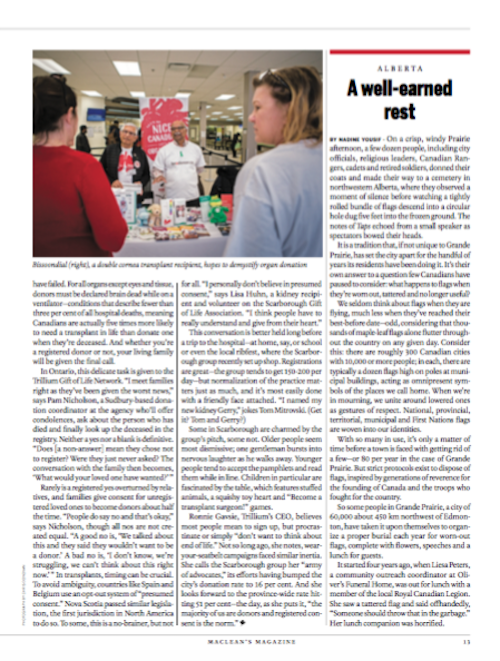