Don’t feel bad if you couldn’t turn away from the now-infamous video that starts with a woman pouring jars of tomato sauce directly onto a countertop. “This is the easiest way to make spaghetti for a crowd,” she says. Atop the sauce, she dumps a bowl of meatballs, heaps of Parmesan cheese and finally an oversized pot of cooked noodles. She stirs wildly and asks, “How delicious does this look?” (It’s repulsive.) Then, an epic final troll: “I’m Italian, and real Italians, this is how you make spaghetti.”

Thirty-four thousand Facebook commenters vehemently disagreed. “As an Italian, I shudder,” said one. “I wouldn’t feed this to my dog,” said another. One deep thinker asked, “Is this performance art?”

Whatever it is, it’s one of many questionable kitchen “hacks” to go viral this past year. Some are legit—maybe—like this spring’s baked feta pasta sensation, which the Washington Post declared “worth the hype.” Others, like hot dogs squashed in a waffle maker or pre-made frozen peanut butter and jam sandwiches, are so illogical they’re infuriating.

This is especially true if you’re trained as a pro- fessional chef. “I had to block the spaghetti video from my mind, it was so offensive,” says Dana McCauley, a food trend expert from the University of Guelph. But, however irked she is by the “recipes,” McCauley admits she sometimes can’t help but click. “I watched one where this woman hacks a pie with Sprite. It’s just like, why, why, why?”

Here are a few possible explanations for the trend: as the world went into lockdown, perhaps people who would otherwise eat out were finally forced to learn to cook for themselves. Perhaps hit-and-miss online grocery shopping made us increasingly desperate for easy substitutions. Maybe these videos are a mocking backlash to the smug artisanal-bread crowd the pandemic produced early on. Or maybe, after 15 months in lockdown, those gourmet aspirations inevitably collapsed into Super Bowl-style dining where you don’t even need a plate.

McCauley has her own theory: “I think these videos are replacing the potluck or buffet, even just visually. During COVID, when we’re rightly careful and paranoid about germs, these videos have this forbidden and even morbid appeal. Like, just touch it, I dare you.”

Whatever is driving the rise of gross-food recipes, viewers are clicking and watching, often to the very end—like a makeover show, a recipe by its very nature compels sticking around for the big reveal. This human habit is being uniquely capitalized by TikTok, where these videos often originate before spilling onto YouTube or Instagram. “Other platforms prioritize engagement,” explains internet strategist Jesse Hirsh, “but TikTok prioritizes attention. The algorithm doesn’t care if you like the video or post a comment; it cares that you watched it at all and then shows you more of the same.”

So every time you hate-watch a fish being cooked in a coffee maker, expect something even grosser to pop up. And if you click on that too, know you’re not alone. “They’re feeding you what you want. There are tons of people just like you, and those groups grow to be tens of thousands of people, all in the same strange niche,” says Hirsh. Thankfully, few will ever actually make countertop spaghetti. 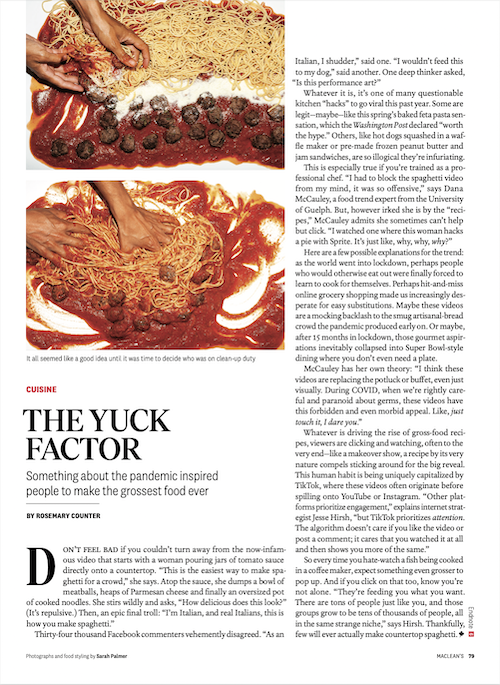