Four Queen’s students chatted in the house they shared, lamenting the end of summer. “We were depressed school was starting again, there was lots of work to do, the weather was getting cold,” says Rachel Albi, a 20-year-old history major who spent her summer working at Disney World. The foursome wanted to do something together to feel better—but without moving. “We wanted to stay inside,” she laughs.

Just 10 minutes later, and inspired by her little sister’s efforts toward a similar project at her high school, Albi and her roommates—music students Jessica Jonker and Erica Gagne, and English major Amanda Smurthwaite—took to Facebook. Their creation, Queen’s U Compliments, launched on September 12th.

The premise is simple: “Basically, we made a profile, of a person not a page, so that we can tag people,” explains Jonker. Users, friends or otherwise, message compliments to Queen’s students which are tagged and posted anonymously. “That way, the compliment shows up on our wall and their personal page,” she says.

Thus far, 1,346 Queen’s students have submitted about 2,000 compliments. Examples include intimate messages (“Max Tremblay, I don’t think you know how much you mean to me”), kind notes to new friends (“Kristin Gottschalk is one of the nicest girls I’ve met here at Queen’s”), and thinly veiled come-ons (“Kelsey Shea is the best looking girl in health, seeing her in class brightens my day. Wish I knew her better!”).

In the beginning, admits Albi, “we just made up compliments for our own friends.” But word spread quickly around campus. “Within two weeks, people were talking about it. I’d be sitting there thinking, ‘Aha, it’s us! You don’t even know!’ ”

At a time when cyberbullying makes national headlines, it’s rare that online anonymity is used for good. Especially at Queen’s, where six student deaths in two years caused the university to overhaul its mental health services, words of friendship and support can be a refreshing change in the morning newsfeed. “Even if you’re not sending or receiving compliments,” explains Smurthwaite, “they’re still wonderful to read.”

One of the most popular posts occurred in January, when a user wrote about their friend Sam, who was “struggling with some personal matters” and “might be trying something stupid.” But when someone complimented him, the effect on his demeanour was huge. “Sam told me how much of a difference it made to get some recognition, support and a great boost of confidence,” the user wrote.

As the site grew in popularity, praise spread to teachers too. Academic adviser Victoria Andrews, praised on the page for her “kindness, intelligence, hard work and genuine compassion,” got over 200 likes. “It really makes your day when you get a compliment,” says Andrews. “Sometimes I think it saves people’s sanities.”

Other people aren’t quite so flattered. “Just like real life, some people are more comfortable with compliments than others,” says Smurthwaite. They’ve received a handful of thanks-but-no-thanks messages and promptly delete those posts.

Queen’s U Compliments continued to grow, and by the end of September, copycat Facebook sites popped up at Acadia and St. Francis Xavier in Nova Scotia. In October, Ryerson University and the University of Waterloo did the same. In November, the Compliments movement went Ivy League when Stanford, Yale and Penn State began their own pages.

The four founders were interviewed by Time magazine. To reveal their identities, says Albi, was just pragmatic: “We decided that just because we started it, it would be better to talk and spread the initiative,” she says. Others believe their unmasking undermines the spirit of the movement. “Anonymity is the most integral part of this,” says McGill’s Compliments founder, who asked his name not be used. “McGill is responsible for all this love; I am simply a word processor.”

But now that Compliments is a global success—pages exist at 130 schools, as far away as Singapore and Abu Dhabi, and are read by 147,000 subscribers—the future of the movement is at a standstill. It’s a technical problem: Facebook limits the number of friends to 5,000. Queen’s capped out by Christmas, and with more than 3,500 friends, McGill will likely soon do the same. As a collective, founders have reached out to Facebook for a favour, but haven’t yet received a response. “So far we’ve heard nothing,” says Jonkers. “We’re optimistic, because this is such a worthwhile initiative, but we’re not sure.”

While they wait for Facebook to expand their friend list, hoping the social media site will similarly pay it forward, Queen’s U Compliments continues to receive 50 to 100 compliments a day. Reading and posting them is a full-time gig; eight hours daily, which the four women divvy up equally, and nobody gets paid. “It’s not about that,” says Smurthwaite. “It’s about being a supportive person without expecting anything back.” 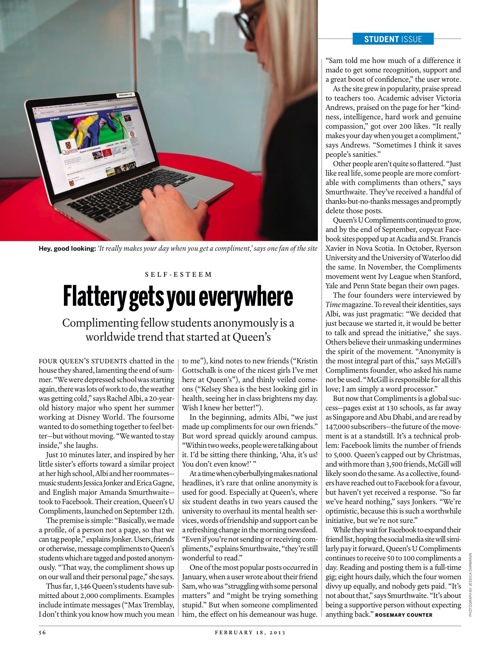