Another Shade of Grey

The steamy book about a billionaire and a woman who likes to be spanked has been hogging the No. 1 spot on the New York Times paperback bestseller list for eight weeks, but the other book is no literary slouch: Between Shades of Gray was a Wall Street Journal best children’s book, not to mention its nomination for the prestigious Carnegie Medal given each year to an outstanding book for young readers.

But when the paperback version of the young adult (YA) book was released this April, the author’s friends were sending her emails saying, “Wait, what’s the name of your book again?” says Ruta Sepetys, author of Between Shades of Gray. On Amazon, Sepetys regularly sees the notice that customers of her book bought the other, and vice versa. In just three weeks, her novel moved into the No. 5 bestselling children’s paperback on the New York Times list.

Meanwhile, people clutching the other book began showing up at Sepetys’s events. “They come up to me afterward and confess they got their events mixed up, but ask, ‘Is it really true that Stalin killed 20 million people?’ So if people discover this part of history, even by lucky accident, it’s a win for me.”

Still, there’s no shortage of Internet snark. “There’s a YA novel called Between Shades of Gray . . . is that like an S&M book for the younger generation?” one tweeter wrote from New York. On Amazon, between mostly rave reviews, appears some unfortunate feedback. “Horrible book, very demeaning to women. I would not recommend anyone read this trash,” reads one misplaced opinion.

Online publishing has long had an issue with knock-offs—Thirty-Five Shades of Grey, I Am the Girl With the Dragon Tattoo and Twilight New Moon are all “spam books” designed to confuse readers—but legitimate publishers often unknowingly do the same.

Lynne Missen, publishing director for the young reader’s group at Penguin Canada, has seen a lot of title overlap. “One year we published The Hat Trick at the same time Scholastic published Hat Trick. These things happen,” she says. While authors and publishers obviously want strong titles that stand out, because you can’t copyright a book title, repetition is inevitable. Last season’s shelves were stocked with anything containing “daughter,” as in My Father’s Daughter, The Witch’s Daughter and The King’s Daughter.

Another popular phrase is “out of the blue,” which has 386 book versions and variations on Amazon.ca. Jan Wong, author of this week’s Out of the Blue: A Memoir of Workplace Depression, Recovery, Redemption and, Yes, Happiness, isn’t too concerned. “It’s like naming a child; unless you get weird, you’re not going to be unique.”

While duplication is common, Missen’s never seen fans of one appear at the other’s book signing, nor has she witnessed an overlap of two so very different books as the Shades of Grey/Gray. “I can’t think of one instance where they’re at such opposite ends of the scale,” she says. 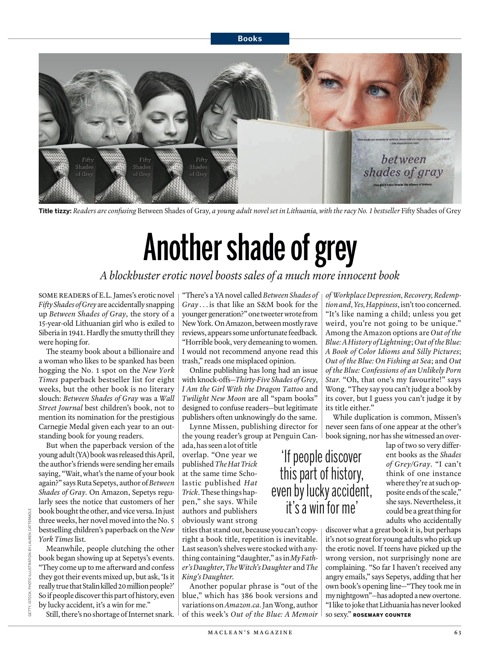