Beauty and your bottom line

Good looks can work for or against in the workplace

“I’m tall, slim, blonde and, so I’m often told, a good-looking woman,” bragged UK journalist Samantha Brick in the Daily Mail last month. “But there are downsides to being pretty–the main one being that other women hate me for no other reason than my lovely looks.”

Shockingly, the Internet was — at least as Brick saw it — quick to prove her point. More than 5,000 comments ranged from the very insightful you-ain’t-all-that to the pseudo-helpful advice she seek psychological help.

New research suggests Brick might not be all wrong. A study by two Israeli scientists looked at the common practice of including a photo with a resume. They submitted two similar resumes, one with a photo and one without, to 2,500 real-life jobs.

Men, as expected, were more likely to get called if they included a photo. (Ugly men, however, were better off not including one.) For women this was reversed: Attractive women were less likely to score interviews than their average-looking counterparts. Gorgeous gals can expect to send 11 resumes before receiving a callback; Plain Janes need only send seven.

The working hypothesis — you guessed it — is girl-on-girl hate. The researchers concluded that because HR departments are largely staffed by women — 93% in this case — the only explanation was old-fashioned female jealousy.

Brick gets this a lot, of course. “Insecure female bosses have also barred me from promotions at work,” she claims.

Nicole Williams, Vancouver author of “Girl on Top: Your Guide to Turning Dating Rules into Career Success,” admits female jealousy does happen at the workplace.

“Yes, there are jealous women out there who will work against you,” she says. But the likelihood you’re too hot for work is slim. “Unless you’re a supermodel, unless you’re so remarkably beautiful that it’s distracting, the chances of this happening is rare.”

In fact, the benefits of looking good at the office — men and women– far outweigh the risk your boss will hate you for being beautiful. “You don’t have to be a psychiatrist to know that people attribute intelligence to attractiveness,” says Williams. “Looking good is always good. You look neater, healthier and smarter.”

So by all means, says Williams, don’t let your ego — whether inflated or depleted — stop you from attaching your pic whenever possible. “On LinkedIn, your profile is seven times more likely to be viewed if you have a photograph,” she says. “It’s like putting a house on the market without posting a picture; people assume the worst.”

That said, some tips: “It’s not a glamour shot; no wind-blown hair, no fancy makeup,” says Williams. Ladies skip the cleavage, men wear shirts. Your dogs and kids are off-limits (this isn’t Facebook). The only hard and fast rule? “It should actually look like you. They should recognize your face when you walk through the door.”

And if you really are too hot for life, make like another famous Brit, 18-year-old Florence Colgate, who just won the country’s natural beauty contest. Somehow, she also managed to remain likeable. “I’m quite a humble person,” Colgate told Good Morning America. “I don’t feel any different really.” 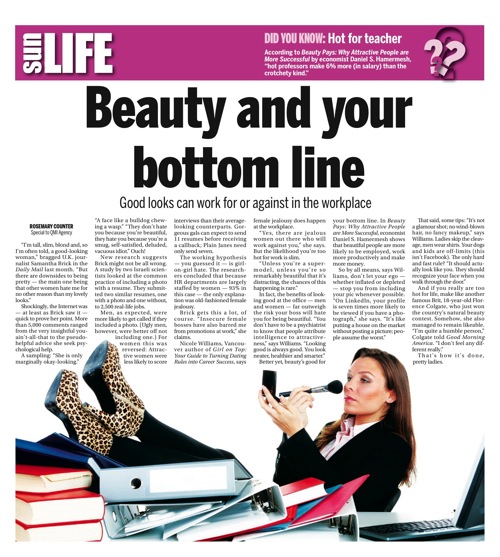