The Case for Letting People Moonlight

So what if your employees are driving Ubers or building Etsy empires on the side?

It’s Hack Day at Shopify. A couple of times per quarter, the Ottawa-based software company lets its more than 1,500 employees goof o all day—kind of. “People get that time to work on crazy ambitious projects that are unrelated to their day-to-day,” says Travis Hines, senior design lead. Shopify serves 300,000 merchants, who sell everything from electronics to custom art, and “we want our employees to use and know the product inside out.” Increasingly, that means sanctioning their side businesses.

Take Liz Bertorelli, Shopify’s social media specialist. As part of Hines’s Start-a-Business initiative, Bertorelli got a $250 bonus to launch Bobo Academy, a line of queer-friendly t-shirts featuring such slogans as “Yes Homo” and “Wish you were Queer.” She works nights, weekends and the odd lunch hour to make her side shop a success; Bobo banked $40K in sales this Pride season alone. “I’m sure we have people making as much money from their Shopify store as they do from actually working here,” says Travis. “And that’s fine. In fact, that’s pretty damn cool.”

Hines is among a growing contingent of forward-thinking bosses who actually encourage side gigs—especially the entrepreneurial kind. “Moonlighting” used to suggest surreptitious sneaking, the kind of thing people would hide from their day-job employers. That’s changing. As workplaces have turned more and more towards contract and freelance positions, extracurricular work is becoming the status quo. Last year, Statistics Canada reported that 946,000 Canadians held multiple positions; of them, more than a third hold a full-time day job.

There’s no doubt this gives employees lots of exibility, but what about their employers? Most bosses tend to tolerate side work, at best, and only if job two is completely unrelated to job one; a Rogers employee might be allowed to drive an Uber, for example, but not freelance for Bell.

A more open-minded approach is better, says Sydney Finkelstein, author of Superbosses: How Exceptional Leaders Master the Flow of Talent: “If employees are working another job that enhances skills that are related and bene cial to their day jobs, then bosses should be very open to that.” Here’s the kicker: Almost anything has the potential to do so—even that seemingly unrelated Uber gig. Maybe they’ll talk up your brand to passengers in their car, for example. Or maybe they’ll foster an entrepreneurial spirit that will spark more hustle by day.

Even when jobs do overlap a bit, bosses shouldn’t default to the jealous boyfriend act: “Don’t assume the worst. They’re probably not trading top-secret information,” says Blunt. “Rather, they’re out there learning new things and bringing that added value back.” Moreover, steer clear of ultimatums; if employees must choose between their day job and passion project, employers might find they’re the ones getting dumped. “It’s a bad feeling when it seems the company owns you and doesn’t want you succeeding anywhere else,” says Hines.

As in any relationship, communication is key. If you feel opposed to any outside employment, say so clearly in your contracts. Otherwise, supporting workers’ outside endeavours will only foster good will, keep passionate people around and create more well-rounded employees. “Moonlighting makes me a better human,” says Bertorelli, “and that makes me a better worker.” 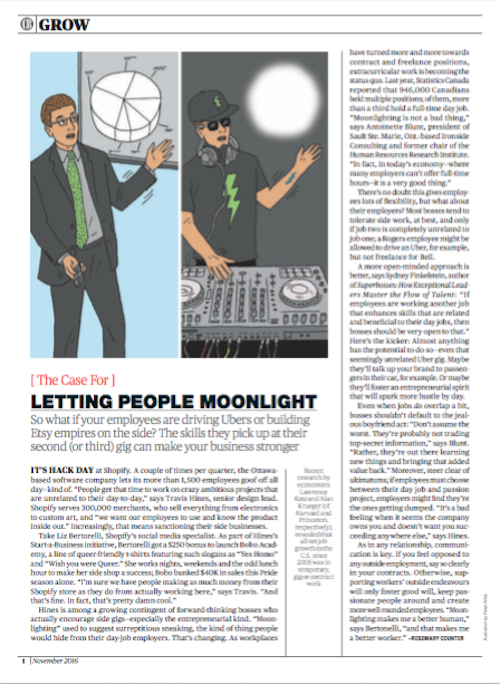