The perfect school might be one you’ve never heard of

How is Harvard University like Angelina Jolie? “Everyone says they want to date Angelina Jolie—or Brad Pitt—but the truth is you’re only attracted to one side of them: the outside,” says Sergey Kouk, MBA consultant with Admit Master. Were you to bump into Brad, it’s unlikely he’d be your soulmate: “He’s probably not the one person out there who’ll make you happy.”

Similarly, would-be MBA students too o en insist that Harvard (or Cambridge, or Oxford, or whichever top-tier school has dominated their academic fantasies for years and years) is the best place for them. But that top school is never the only option, Kouk says. Your second (or third, or fourth) choice might be a far better pick, even if it looks slightly less impressive on your resumé. Looking beyond the schools that are big in both size and reputation is crucial for any aspiring student. Your perfect match might be a school you’ve never even heard of.

Part of Kouk’s job is to help people think beyond the big brands. Take Polina Roufanova. Back in 2014, she was a 26-year-old Toronto- nian working in fashion and dead set on an MBA from INSEAD, the prestigious business school with campuses in the Middle East, Asia and Europe. “It was ranked in the top ve worldwide,” Roufanova says, “and I was attracted to the fact that you split your time between Singapore and France.” The glamorous experience is priced accordingly—INSEAD tuition is well over $125,000.

Kouk began by digging a little deeper: “The first thing I ask every client isn’t where they want to do an MBA, it’s why.” Many people don’t know. Then he asks what they want to do after their MBA—and they don’t know that either. “These are the people who are hoping an MBA will solve all their problems. So the more prestigious it is, the better.” Others want a particular experience and have unknowingly conflated it with a particular place. “I wanted a new experience outside of Canada and hoped it would open up new opportunities,” says Roufanova. INSEAD, which likes to call itself “the Business School of the World,” was selling a hard-to-resist international travel fantasy.

But any number of business schools will deliver the very same with less fanfare. “It’s just like the students themselves,” says Isabelle Dostaler, dean of the faculty of business administration at Memorial University in St. John’s. “Universities tend to celebrate the students who are the most visible, who win contests and awards, and we forget about what I’d call the ordinary ones—the well-rounded, nice, capable students who don’t always get noticed.”

Dostaler admits there’s an MBA school hierarchy at work, but is quick to assert it’s very much a social construction. “We never stop saying Harvard is the best, then we say Western [University] is the Canadian Harvard, and by constantly saying this, we end up creating our reality.”

Popular culture doesn’t help. “We’re conditioned by the media, by movies, by the stories we hear,” says Kouk. Films like Good Will Hunting and The Social Network (neither of which were filmed on the campus they portrayed) burrow into spaces deep into our collective psyches. But that’s not where anyone should be shopping for a real-life MBA. “You can and will find much more innovation in programs that are a bit more in the shadows,” says Dostaler. Memorial’s new MBA in social enterprise and entrepreneurship, for example, might not be as famous as Harvard, but it offers a chance for an intimate group of students to study a topic many care about passionately.

Indeed, investigating beyond your one-and-only opens up a pool of ever-expanding possibilities. “There are many, many more MBA programs out there than before, and all sorts of variations and specialized degrees,” says Brad Davis, associate director at Waterloo’s Lazaridis School of Business. “Then there’s the rise of online programs and what they call blended programs—predominantly online with a now-and-then weekend get-together. Apart from putting [MBA programs] in bookmobiles and coming directly to your house, there’s just about everything now.”

An array of options is mostly great for students, says Davis, though “the proliferation of choice can create paralysis.” Overwhelmed students may stubbornly cling to Plan A because they lack time, knowledge or motivation to research and sort through dozens of possible Plan Bs. Here’s a helpful thought from Davis to calm those nerves: “The programs all deliver very similar and standardized content. Even Harvard has fundamentally the same content and structure—and much of the same material,” he says. “There’s no school that’s teaching proprietary secrets that the rest of us don’t know.”

More good news: With the abundance of MBA programs come ample spots for students. In any 18-month period, there are fewer than 2,000 Canadian applicants who meet basic requirements (that’s an undergraduate degree with a B+ average, a few years of work experience and a reasonable GMAT score), according to ndings by Murtaza Haider, Ryerson’s former associate dean of graduate programs and research. But there are between 8,000 and 10,000 spots to be filled. “Students in Canada might think there are few spots and they should worry about getting one, but there are actually far more seats available than qualified applicants,” says Haider, currently an associate professor at the Ted Rogers School of Management. By looking beyond the Ivy League, applicants gain the power to choose their school rather than wait in hopes they’ll be picked.

But to paraphrase Groucho Marx, the very fact that Harvard probably won’t have you might be exactly why you want it. “Very few people have access to their top school, which tends to be very elitist, which is why they want in,” says Leslie-Anne Barber, graduate academic administrator at the Telfer School of Management in Ottawa. But school rankings produced by organizations like the Economist and the Financial Times only measure very specific, quantitative things, like the percentage of grads who are employed within three months, and their starting salaries. The rankings cannot capture more nuanced things like good vibes, staff helpfulness (Barber’s job all day), or friendship, networking and mentorship possibilities. “We have a professor renowned in the field of women and leadership, but even if that’s of great interest to you, we’ll never be able to show it to you in the rankings,” says Barber.

Depending on your chosen field, a specific school or program may actually have disproportionate cachet within certain sectors—something else that might not be captured by global rankings. “We’re the primary recruiting ground for a lot of the leading accounting firms,” says Davis of Lazaridis. “There’s a certain status that comes with high-profile degrees, but there are other programs that offer a more direct pipeline to your desired profession.”

Inside info isn’t always easy to find, but for anyone looking beyond the top-tier schools, an admissions consultant is one option. For a fixed rate of somewhere around $1,000, Alex Dorward of Ottawa-based Admissions Consulting can counsel MBA applicants if and when a top-notch degree is worth its hefty price tag. “Is a Harvard business degree worth it? That depends,” says Dorward. For him, the choice comes down to the client’s career trajectory—all the way back to undergrad and forward to future job prospects. “If you have an undergrad at an Ivy school and go to a third-tier MBA program, that’s probably not going to increase your market value,” he says. “In that case, and if you’ve got money to spend, you’re better off at a top-tier.”

Business students do best looking at their MBA like any other investment, including weighing cost and risk against potential gains and rewards. “Say you already have a marketable degree and good job prospects,” says Dorward, “then the value added [by an expensive MBA] probably isn’t worth the cost.” For less-marketable degrees with limited job options, a reasonably priced MBA can provide a huge payoff. “If you have, say, a philosophy degree, then any MBA will increase your market value. That’s a great time to look for less expensive options.” Though he’ll be gunning hard to get you accepted wherever you want, another part of Dorward’s service is gently nudging his clients towards possibilities they hadn’t considered.

Kouk did just that for Roufanova, suggesting a just-in-case Plan B at Hult International Business School. Like INSEAD, Hult has multiple campuses—in London, San Francisco, Dubai, Boston, New York City and Shanghai—through which students can rotate during the one-year program. Within a month of her application, Hult replied with her acceptance—and a scholarship, too. “It was half the price of INSEAD tuition, so I was sold,” says Roufanova, who arrived in Dubai with “a suitcase and an open mind.” She’s since graduated, met and married her husband, and made the Middle East her home. “Sometimes what we think we want is not the case when it’s put to the test,” she says.

Imagine this worst-case scenario: You get all the way to the so-called best school only to learn you hate it. “This happens a lot,” warns Dorward. If you’re not exactly sure what you want to do with your life—or if you’re thinking a fancy Ivy League will solve this problem for you—Dorward suggests you take a breather to figure it out. “You can spend hundreds of thousands of dollars to find out you’re actually not interested in investment banking and you want to be an entrepreneur.” Or, even worse, despite a superficially perfect program, you’re somehow miserable. “Lots of people consider everything else except whether they’ll like it there,” he says.

There are ways to avoid this bleak fate. “Firstly, learn to ask yourself the right questions,” says Kouk. Ask what you want from your school, and from the whole experience, and what will make you (and your family) happy. “I call it making an ethical investment in yourself. Pick somewhere you’ll sleep well at night,” he says.

Fit, not brand, should ultimately decide your MBA. This includes pragmatic things like cost, location, daytime or evening and weekend classes, but also less tangible factors, like temperament, values and personality. “Think about your strengths and weak- nesses,” suggests Haider, “then look for an MBA program where your weaknesses won’t be a handicap and your competitive advantages will be de ned by your strengths.”

Then get into your car (or on a plane) and actually visit the campus. (You’d be shocked by how many Harvard-or-bust people have never actually visited Cambridge, says Kouk.) “You need to physically go there, preferably to the information session, but also just come and sit in on a class to get the feel for it,” says Davis. If for some reason the butterflies aren’t leaving your stomach, listen to your intuition, even if it contradicts a lifetime of idealization. “Sometimes you think you’re going to love a place and when you physically get there, you don’t,” says Barber. “It’s just a vibe or a feeling, and sometimes you can’t even describe it.”

Harvard is not for everyone, according to Nitin Nohria, the dean of Harvard Business School. “We’re looking for people who really enjoy the responsibility of running a company, or want to run a company,” he told Business Insider. “If you have a very special interest in a particular thing, other schools may be better suited to you.” You should have things in common, not just one-way idolization, because you’ll be spending all day every day with your program for a very long time. “It really is like a marriage,” says Kouk. “And most MBAs aren’t going to allow you to take another MBA if you already have one.” No divorces, he means, so choose wisely. 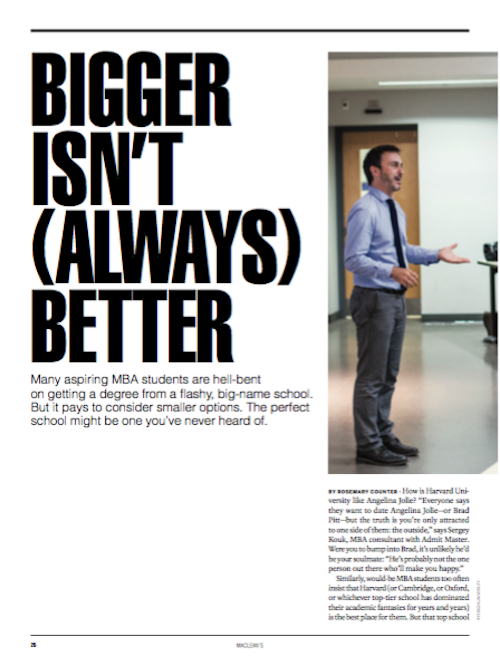 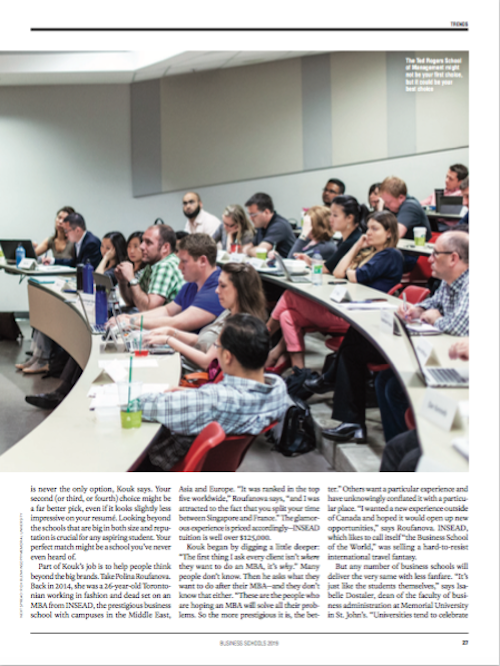 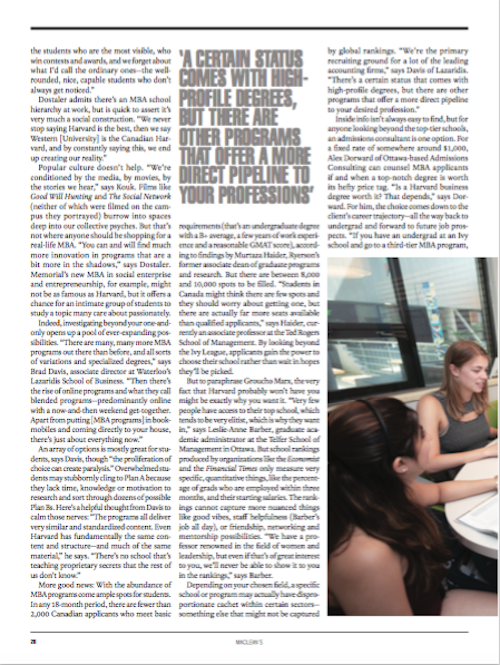 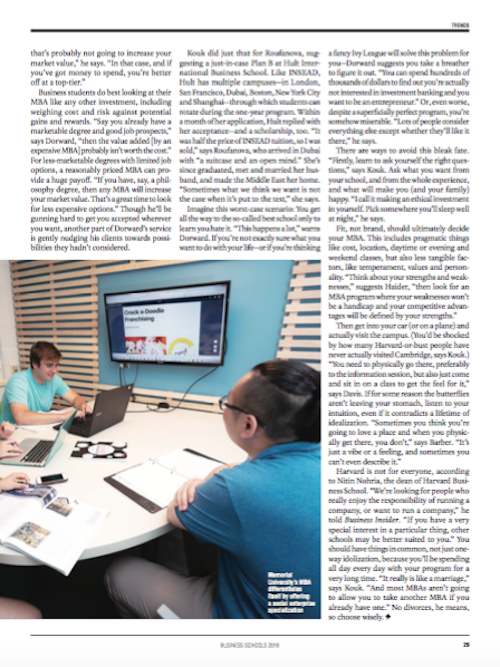